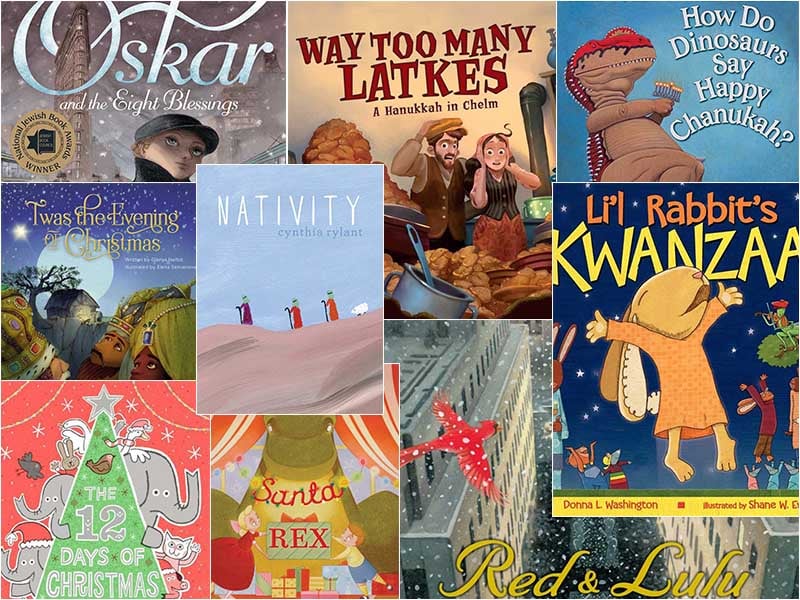 (RNS) — Children’s book publishers – hoping perhaps for the next contemporary classic, another “Polar Express” or “Hershel and the Hanukkah Goblins” – have sent out a blizzard of holiday choices this year.

Some are clearly rooted in religious messages, featuring the Christ child or the meaning of the menorah. Others highlight December’s focus on family, kindness and generosity in ways that may appeal to interfaith and secular families – and everyone else.

Who knew dinosaurs had holidays? Beasts and bunnies and birds star with booksellers. So does snow. Bookstores are flush with books that highlight the chill beauty of winter and the warmth of traditions and togetherness.

Here are some of the season's favorites — highlighted by booksellers, publishers and reviewers.

“Oskar and the Eight Blessings” (Macmillan) by Tanya and Richard Simon. Published in 2015, the story is still popular. It tells of a young refugee child alone in New York and the kindnesses he encountered — one for each night of Hanukkah — that brought light to a dark time.

There’s fun to be had as well on the picture book shelves. “Red & Lulu” by Matt Tavares (Candlewick) portrays two cardinals nesting in an evergreen who lose sight of each other as Christmas approaches. But readers can rejoice in the end when the birds reunite at Rockefeller Center’s Christmas tree.

Stephanie Appell, manager for young readers books at Parnassus Books in Nashville, Tenn., includes “Li’l Rabbit’s Kwanzaa” among her contributions to the staff's long list of suggested holiday books. The bunny’s efforts to find a perfect present for his grandmother to celebrate a feast day make it a perfect book, Appell says, to introduce the seven principles of Kwanzaa for the first time.

Many books marry charming images and celebratory text and without sacrificing a spiritual message.

For fans of Hanukkah’s traditional potato pancake treats, turn to “Way Too Many Latkes” by Linda Glaser (Kar-Ben) from a Jewish publishing house with a mission to share the faith from generation to generation.

And  “Twas the Evening of Christmas” by Glenys Nellist (Zondervan) is new this year from a publishing house where the Christian biblical message is foremost.

A riff on the Clement Moore classic “Twas the Night Before Christmas,” Nellist “starts with Mary and Joseph and ends with shepherds and wise men and a sweet ending with Mary saying, ‘To all a good night,’ and kissing baby Jesus on the forehead,” says Annette Bourland, ZonderKidz senior vice president and group publisher.

“We are clearly saying in all our Christmas books that a savior is born. This is what sets us apart from what other publishers are doing,” says Bourland.

There’s no interfaith mashup at Kar-Ben, either. “We don’t do Christmas-oriented books in a Hanukkah guise. No ‘Hanukkah Harvie’ (a made-up "Jewish Santa") and no Jewish Christmas trees,” says publisher Joni Sussman.

Even so, Sussman acknowledges, there’s “a wide spectrum of observance” for Jewish families. Many are “still deciding how to convey religion to their children. We want to make the holidays accessible, wonderful and joyful for them. But it’s not a competition with Christmas.”

There is, however, a big market for the all-presents-no-theology approach to the season.

A 2015 Pew Research survey of 5,000 people found that adults in interfaith marriages or couples where one partner claimed no religion — a growing number of families — are “far less likely to participate in religious activities with their children” than same-faith couples, including the kinds of holiday storybooks they buy.

“I see a lot more general sort of secular holiday titles and people ask for them as well,” says Cristina Russell, children’s book buyer for Books & Books, a group of stores based in South Florida. “Younger parents want to talk about the holidays in more general terms and the grandparents gravitate more to a specifically Hanukkah or Christmas book.”

The hot books in Miami include, of course, dinosaurs. “Santa Rex” (Random House) by Molly Idle has “sweet illustrations and a spirit-of-Christmas theme – laughter and being together,” says Russell.

And for spirit-of-Hanukkah, there’s Jane Yolen’s “How Do Dinosaurs Say Happy Chanukah?” a book that's simply meant to be fun, says Russell.

Publishers Weekly gave star reviews to “Nativity,” to “Red & Lulu” and to the carol-themed “12 Days of Christmas” by Greg Pizzoli (Disney Hyperion). Pizzoli's tale features the carol come to life starring elephants in funny hats, mice and cats and other critters delivering the French hens, maids-a-milking and more.

John Sellers, children’s reviews editor for the magazine, takes a broad view of the book bonanza. “With any children’s book, it’s not necessarily the book’s job to explain every aspect of the holiday. The books are part of a larger conversation for parents and kids about these holidays and what they mean.”

Says Sellers: “Everyone is trying to reach a broad audience and walk a broad line.”

Related Posts
By Omar Suleiman
At Christmas, Christians and Muslims take time to talk about loving Jesus, and each other
By Amy Butler
How to celebrate Christmas: Change the world
By Emily McFarlan Miller
Do humanists celebrate Christmas?
By Claire Giangravé
In Christmas message, Pope Francis calls on Vatican officials to embrace change
By Tara Isabella Burton
How we all became Jedis