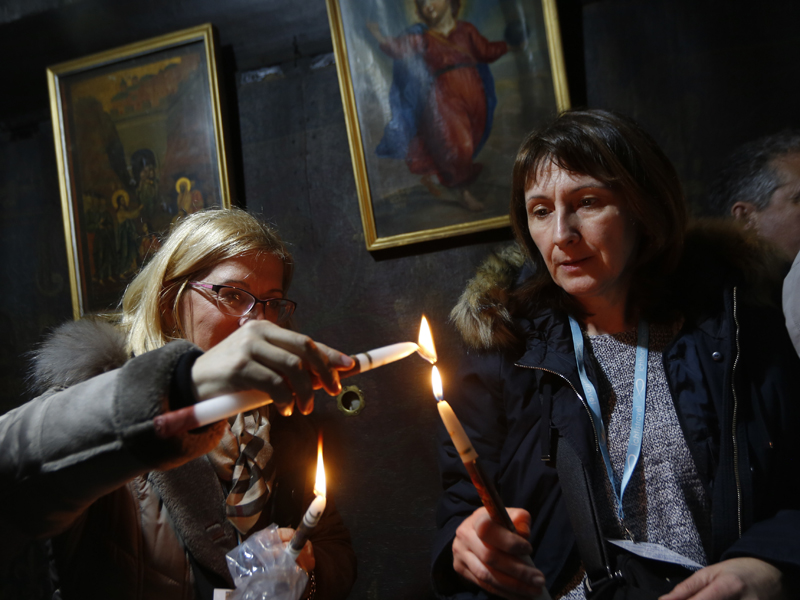 Christian worshipers light candles at the Church of the Nativity, built atop the site where Christians believe Jesus Christ was born, on Christmas Eve, in the West Bank City of Bethlehem, Sunday, Dec. 24, 2017. (AP Photo/Majdi Mohammed)
December 24, 2017
Yonat Shimron

BETHLEHEM, West Bank (AP) — It was a subdued Christmas Eve in the historic birthplace of Jesus, with spirits dampened by recent violence sparked by President Donald Trump's recognition of nearby Jerusalem as Israel's capital.

Crowds on Sunday (Dec. 24) were thinner than previous years, with visitors deterred by clashes that have broken out in recent weeks between Palestinian protesters and Israeli forces. Although there was no violence, Palestinian officials scaled back the celebrations in protest. Cool weather, and a rainy forecast, also weighed on the holiday cheer.

Claire Degout, a tourist from France, said she would not allow Trump's pronouncement, which has infuriated the Palestinians and drawn widespread international opposition, affect her decision to celebrate Christmas in the Holy Land.

"The decision of one man cannot affect all the Holy Land," she said. "Jerusalem belongs to everybody, you know, and it will be always like that, whatever Trump says."

Trump abandoned decades of U.S. policy on Dec. 6 by recognizing Jerusalem as Israel's capital and saying he would move the American Embassy to the holy city.

Trump said the move merely recognizes the fact that Jerusalem already serves as Israel's capital and that he was not prejudging negotiations on the city's final borders. But Palestinians, who seek Israeli-annexed east Jerusalem as their capital, saw the declaration as unfairly siding with Israel. Last week, the U.N. General Assembly voted overwhelmingly to reject Trump's decision.

The announcement triggered weeks of unrest in the West Bank and Gaza Strip, including near-daily clashes in Bethlehem, which lies just south of Jerusalem.

By midafternoon, hundreds of people had gathered in Manger Square near the city's main Christmas for celebrations, greeted by bagpipe-playing young Palestinian marching bands and scout troops. Accompanying the decorations was a large banner protesting Trump's Jerusalem declaration.

Bethlehem's mayor, Anton Salman, said celebrations were toned down because of anger over Trump's decision.

"We decided to limit the Christmas celebrations to the religious rituals as an expression of rejection and anger and sympathy with the victims who fell in the recent protests," he said.

Next to the square was a poster that read "Manger Square appeal" and "#handsoffjerusalem."

"We want to show the people that we are people who deserve life, deserve our freedom, deserve our independence, deserve Jerusalem as our capital," he said.

The Most Rev. Msgr. Pierbattista Pizzaballa, the apostolic administrator of Jerusalem, the top Roman Catholic cleric in the Holy Land, crossed through an Israeli military checkpoint to enter Bethlehem from Jerusalem. His black limousine was escorted by a group of men on motorcycles, some of them wearing red Santa hats.

Pizzaballa, who last week rejected the U.S. decision, tried to steer clear of politics. He waved to the crowd, shook hands and hugged well-wishers as he walked to the Church of the Nativity, where he was to celebrate Midnight Mass.

"I already said the message. Now it's time to enjoy," he said. "We as Christians we will enjoy, despite all the difficulties we have. Merry Christmas."

James Thorburn, a visitor from London, said he was determined to enjoy the holiday and show solidarity with Bethlehem's residents.

"I know that a lot of people did cancel," he said. "I felt I should come to support the Palestinians."