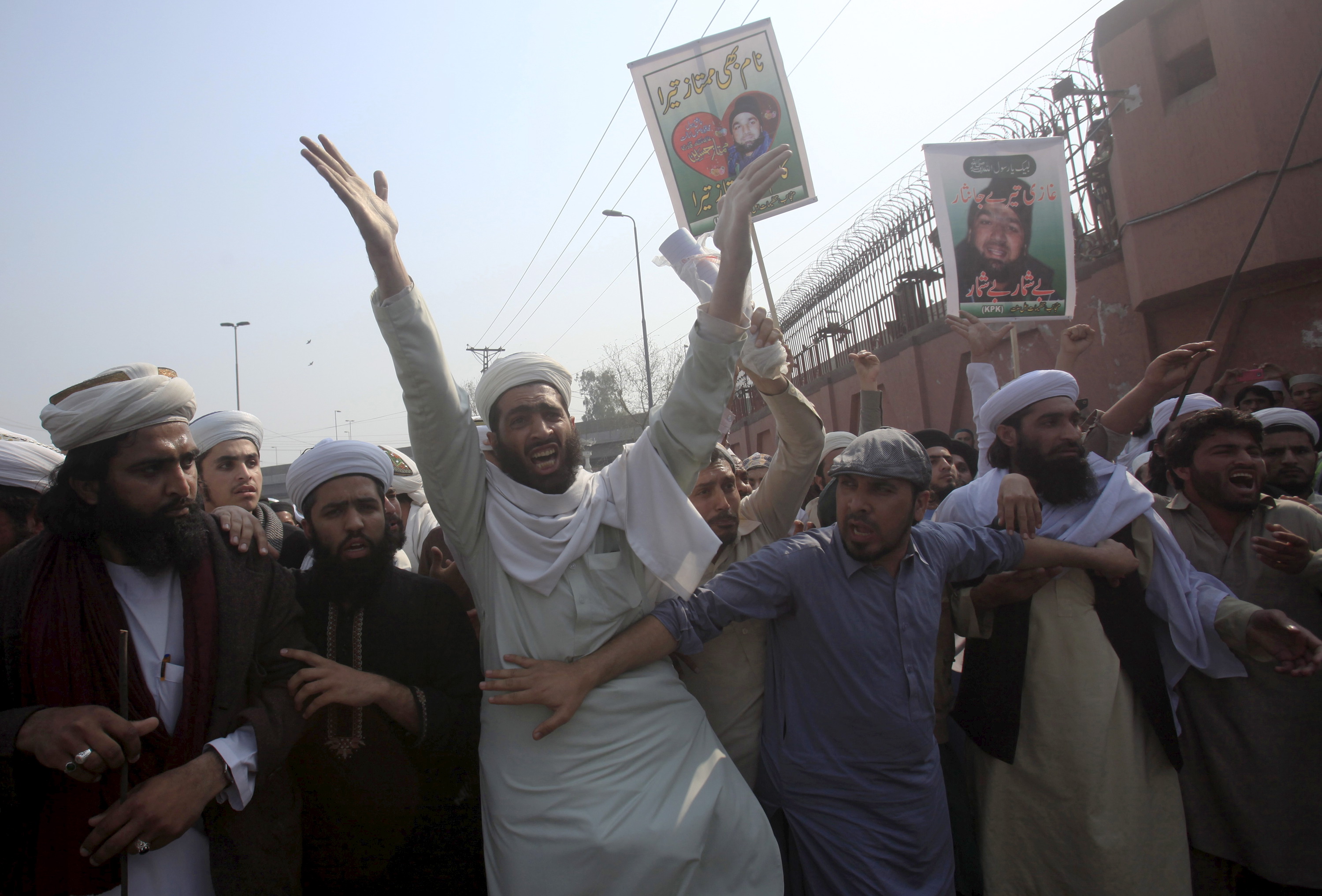 Blasphemy is a life-or-death issue in Pakistan. Protesters rallied in February 2016 against the hanging of a guard who, police said, killed the Punjab governor for saying he wanted to reform the nation's strict blasphemy laws. Reuters/Fayaz Aziz.
December 31, 2017
Cathy Lynn Grossman

ISLAMABAD (AP) — Pakistan's supreme court exonerated a man convicted of blasphemy after he served nine years of a life sentence in prison.

A two-judge panel of the court ruled on Friday (Dec. 29) that Mohammad Mansha was falsely accused, citing lack of evidence.

According to court records, Mansha, 58, was arrested in September 2008 after the imam of a mosque in the Bahawalnagar district in Punjab province told authorities that Mansha had desecrated a copy of the Quran.

A Punjab judge convicted Mansha of blasphemy and sent him to life in prison in 2009. His conviction was upheld in 2014 and the supreme court took up the case the same year.

Mansha's defense attorney, who asked not to be named for fear of retribution, said his client was arrested on a complaint from a man who was suffering from hearing and speech impairments. He said evidence from such a witness has no legal value under the Evidence Act.

Mansha's attorney said that after the complaint, his client was presented before a village council, where he was badly beaten and then handed over to police. The police registered the case under the country's harsh blasphemy law based on the complaint of the imam, Hafiz Muhammad Munir. The hearing- and speech-impaired Akhtar Mohammad became the star witness.

Abdul Waheed, prosecutor in the case, said that there was no "scientific evidence" against Mansha and that the police investigation was "faulty," which led to his acquittal. Waheed said Mansha, a poor villager, could not hire a lawyer so the court appointed him one.

Blasphemy is a very sensitive issue in Pakistan's conservative society. In 2011, a liberal governor of Punjab province, Salman Taseer, was assassinated by his official guard because he spoke in support of a Christian woman, Asia Bibi, languishing in a jail after being convicted in a blasphemy case.

Taseer said at the time that the blasphemy law was being exploited. The guard was later executed.

Zia Awan, head of Lawyers for Human Rights and Legal Assistance, lauded the supreme court's verdict in Mansha's case but said the court should have compensated him for his years behind bars on false charges.

Awan added that it is time for the Parliament to carefully look into the country's blasphemy law and finds the means to curb its misuse or exploitation.

Related Posts
By Samy Magdy, Lee Keath
Muslims try to keep Ramadan spirit amid virus restrictions
By Simran Jeet Singh
Behind the tensions between Muslims and Sikhs in Punjab
By Aysha Khan
Sikh holy site in Pakistan mobbed by locals, trapping worshipers
By Aysha Khan
Why these New York Sikhs are fundraising for a mosque in India
By Emily Schmall
India seeks to portray sense of calm in locked-down Kashmir