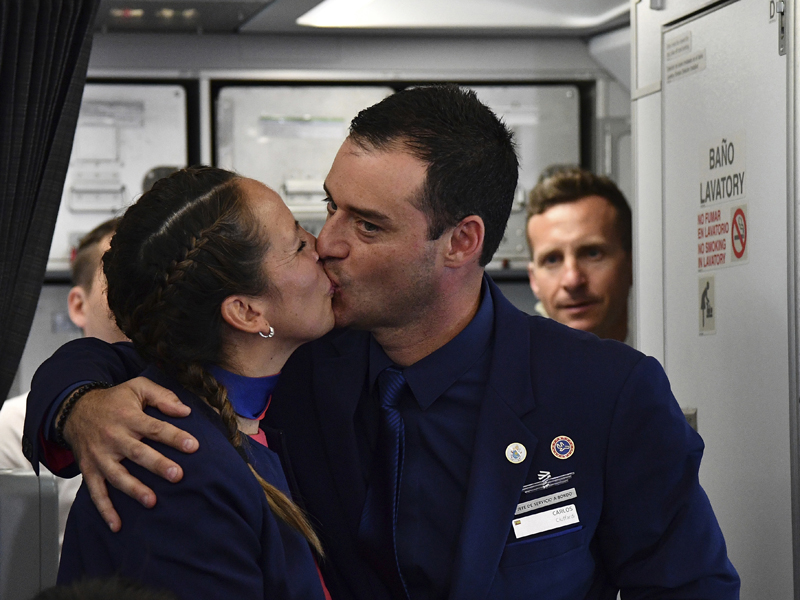 Crew members Paula Podest and Carlos Ciuffardi kiss before journalists after being married by Pope Francis during the flight between Santiago and the northern city of Iquique, Chile, Thursday, Jan. 18, 2018. Francis celebrated the first-ever airborne papal wedding, marrying these two flight attendants from Chile's flagship airline during the flight. The couple had been married civilly in 2010; however, they said they couldn't follow up with a church ceremony because of the 2010 earthquake that hit Chile. (Vincenzo Pinto, POOL via AP; caption amended by RNS)
January 18, 2018
Yonat Shimron

IQUIQUE, Chile (AP) — Pope Francis wrapped up his Chile visit by performing a first-of-its-kind airborne papal wedding ceremony and then celebrating a Mass on land, during which he urged the South American nation to continue welcoming migrants and caring for the least fortunate.

Francis' spontaneous offer to celebrate the marriage of two LATAM flight attendants at 36,000 feet came Thursday (Jan. 18) as he traveled to Iquique, a popular beach destination in northern Chile that is also home to tens of thousands of migrants who have poured into the region's strongest and most stable economy in search of a better life.

The Argentine pope, who has frequently demanded wealthy countries open their arms to migrants and refugees, called Iquique a "land of dreams" for so many newcomers and urged Chile to continue to be a place of hospitality, jobs and justice, especially for those migrants who are exploited.

Francis' insistence that countries welcome and integrate migrants fleeing war, drought or hardship has often fallen on deaf ears in Europe, where the migrant crisis has been a driving factor in politics for years. While Chile isn't experiencing the same anti-immigrant backlash seen in the United States and Europe, the incoming right-wing government of President Sebastian Pinera is looking to crack down.

Pinera, who was previously president in 2010-2014, said during the campaign that Chile would remain welcoming to immigrants who follow the law and aim to be productive members of society.

"We want to shut the doors to drug trafficking, contraband that is often associated with it and, above all, we want people who come to Chile to respect our law," Pinera told local ADN radio in October.

Chile had the fastest rate of migrant growth of any country in Latin America in 2010-2015, according to U.N. and church statistics, although the total numbers are comparatively small.

Most of the newcomers are Haitians, who often find a hard time integrating professionally because of language barriers.

After the Mass, Francis was to meet with two victims of Chile's military dictatorship before heading off to Peru on the second leg of his two-nation South American tour.

The pontiff broke new ground Thursday on an Airbus 321 when he performed a wedding ceremony for flight attendants Paula Podest, 39, and Carlos Ciuffardi, 41, who were wed in a civil service in 2010 but had to cancel their church ceremony due to a major earthquake that hit Chile.

Speaking to journalists in the aisle after serving a breakfast of croissant sandwich and fruit, Ciuffardi said the pope asked them if they wanted to be married in the eyes of the church, and they readily agreed.

In Peru, Francis is expected to once again face pressure to address a church sex abuse scandal that exploded there in recent years thanks to allegations — confirmed by the Vatican and external investigators — of sexual, physical and psychological abuse in a Peru-based lay Catholic movement, the Sodalitium Christianae Vitae.

Just last week the Vatican took over the SCV and imposed a commissioner to run it after Peruvian prosecutors announced they were seeking to arrest its disgraced founder, Luis Figari.

Figari, a charismatic layman, founded the SCV in 1971 as one of several Catholic societies born of a conservative reaction to the left-leaning liberation theology movement that swept through Latin America starting in the 1960s. Today it counts some 20,000 members and chapters throughout South America and the United States.

The report by two Americans and an Irish expert in abuse found that Figari sodomized recruits and forced them to fondle him and one another. He liked to watch them "experience pain, discomfort and fear" and humiliated them in front of others to enhance his control over them, the report found.

A journalist and former member of the society began accusing Figari of abuse in 2010. The case languished in Lima and the Vatican for years until a book was published in 2015 detailing how Figari would humiliate his members.

While Figari was never charged, many of the allegations against him were eventually confirmed by a Vatican inquiry. Figari was ordered to cut contact with members of the society last year and has been living in Italy ever since.

He has never provided concrete responses to the accusations, though the society has said they were likely true.

Some of Sodalitium's victims had denounced the Vatican's handling of the case, saying in 2017 that the years-long delay in taking any action, and subsequently the decision to allow Figari to live in comfortable retirement in Rome, was anything but satisfactory.

It is unclear whether Francis will confront the issue head-on in Peru as he did in Chile. In Santiago, Francis met with victims of abuse and begged forgiveness for the crimes of some priests.

Chile has been wracked by the scandal of the Rev. Fernando Karadima, a charismatic priest who sexually abused young boys in his parish. His crimes were covered up for years by the local church until the victims came forward and publicly denounced him. The Vatican sentenced him to a lifetime of penance and prayer for his crimes in 2011.