A few years ago, I began researching a book, “Learning to Speak God from Scratch,” on the decline of sacred words and spiritual conversations in the Western world. I became convinced that most of the terms in the vocabulary of faith are worth preserving –though many need to be reimagined.

Following the election of Donald Trump, I noticed that many religious leaders were less inclined to use the word “evangelical” to describe themselves even though they fit the dictionary definition. As someone who feels increasingly disenfranchised by “Trumpvangelicals,” I can sympathize with this impulse. But I also wonder whether there is more life left in the “evangelical” label. Should we abandon it or work to revive it?

To answer this question, I spoke with Dr. John Stackhouse, a professor of religious studies at Crandall University and author of Why You’re Here: Ethics for the Real World who still uses that label to describe himself. As a Canadian and an evangelical theologian, I thought he might have some unique perspectives. Here we discuss what the term means and why he thinks it is worth fighting for.

RNS: Let’s start by defining terms. How do you define “evangelical?”

Only in the United States does “evangelical” primarily mean “white Protestants descended from fundamentalists who want to re-convert America and then use its influence to convert the rest of the world.”

RNS: There is a trend right now in which evangelical Christians are rejecting the label “evangelical.” Blogger Trevin Wax calls this the “evangelical identity crisis.” Why is this occurring?

JS: The identity crisis comes from having their identity linked to Donald Trump, of course—which, if you give him 80% of your vote, is what happens. Evangelicals now have to say, “Well, no, we don’t like this and this and this, and we really hate that and that. But we do like thus and so, and we absolutely love such-and-such.” It was far, far easier to just say, “We’re like Billy Graham!” But now we’ve got Franklin and the other members of Trump’s evangelical curia, so it makes the identity question…complicated.

RNS: You’ve chosen to hang onto the label. Why?

JS: It helps to be Canadian. Canadian evangelicalism experienced a bit of fundamentalism, but fundamentalism hasn’t overshadowed the whole tradition as it has in the U.S. International evangelicalism, as seen in bodies like the World Evangelical Alliance (until recently, led by a Canadian), the International Fellowship of Evangelical Students, and the Lausanne Committee do have to deal with massive American influence. But, on the whole, they maintain a healthier balance: one that retains the focus on personal piety and friendly evangelism typical of the eighteenth-century roots of the movement in people like John and Charles Wesley, George Whitefield, and Jonathan Edwards.

RNS: But what is wrong with someone rejecting the label because of what it has come to mean?

JS: Labels are just tools: If it works for you, use it. If not, then don’t. I don’t use it when I’m pretty sure it’s going to misrepresent me in this or that conversation or group. But it’s a pretty good label for a genuine phenomenon: this distinctive kind of Protestantism that emerges out of Puritanism (in Britain) and Pietism (on the Continent), blossoms in the trans-Atlantic revivals of the eighteenth century, and carries on to this day in varied but related streams. If we drop “evangelical” as a descriptive term because of political poisoning, okay, but we’ll have to find another one, because there is something there that needs a label.

RNS: It seems to me that the meaning of a word is comprised of both a definition and connotation. You seem to value the definition, but some people are reacting against the connotation. That is, the negative associations that have been strapped to this word. Are you talking about different things?

JS: Identifying a movement by what strikes you as most interesting (most admirable, most terrifying, most ugly) is one way to pick it out, but another is to see it on its own terms, calming down one’s emotional reaction to analyze what’s actually there. So, yes, I’m using the term as one does in the quiet of the historian’s study. But I sympathize with those are triggered by it to blast off in rage about the excesses of the prosperity gospel, racist and sexist elements in evangelicalism, and, of course, the current U. S. president.

I’m reminded of a scholar of John Calvin, who taught at a Calvinist school and belonged to a Calvinist church, finishing a public lecture once and fielding this question from the audience: “So are you a Calvinist?”

He wisely paused, and then replied, “What do you mean by that?”

“I mean someone who enjoys worshiping a God who delights in damning babies to hell.”

“Oh. Well, then, no. I’m not a Calvinist. And neither was John Calvin.”

RNS: There is a racial problem with this term, isn’t there? “Evangelical” commonly refers to white evangelicals and leaves out many Black, Latinx, Asians, and others who share similar beliefs. How do you address this problem?

JS: Again, this is a much more acute problem in America than elsewhere. I don’t mean to deny Canada’s chequered past when it comes to relations between white and non-white evangelicals, but it isn’t nearly as major part of our story. In fact, despite some horrific history of forcible residential schooling of First Nations children, our native population is now significantly more evangelical than is the white. Asian-Canadian evangelicals have significant presence in evangelical organizations alongside whites. And black evangelicals are simply not numerous in our country outside some historic churches in the Maritimes.

In the United States, however, there are still divides that keep large populations of blacks, Latinx, Asians, and others apart from the networks and fellowships of white evangelicals. I’m glad for the signs that that’s been changing positively especially over the last generation, and it remains to be seen whether the Trump phenomenon will help or hurt attempts to connect evangelicals across these lines. It hasn’t been a good start, that’s for sure.

RNS: In the book Still Evangelical?, Mark Young writes that most Americans perceive modern evangelicalism and Christian fundamentalism to be one in the same, but he says, they are not. What are the differences in your mind?

JS: George Marsden’s magisterial study, Fundamentalism and American Culture (Oxford, 1980), helped us see that “evangelicalism” is a big Venn circle with “fundamentalism” a smaller circle within it—even as fundamentalists themselves would cry, “We’re not with you!”

Fundamentalism was more-or-less a synonym for evangelicalism until the 1920s, and even into the 1950s in Britain, Canada, and elsewhere. After the infamous Scopes “Monkey Trial” of 1925, however, American fundamentalism rapidly lost public prestige and increasingly came to resemble the caricatures sketched by H. L. Mencken and other hostile journalists at the time. From a northern, urban, sophisticated movement of people concerned about certain modern trends in American Christianity it became southern, rural, and anti-intellectual with a phobia of everything “worldly.”

Militant separatism became its hallmark and, as Joel Carpenter and others have shown, fundamentalists got busy through mid-century erecting an entire parallel culture of schools, colleges, denominations, missions, and other organizations to replace the ones they lost.

Jerry Falwell’s move in the late 1970s, therefore, to bring fundamentalists back into the cultural-political contest for America’s soul is one of the most important events in American history. I’m not kidding. Falwell helped re-engage millions of previously alienated citizens in American public life, and every election since 1980 bears marks of that change. Fundamentalists nowadays are still militant, but, as the alliance of Jerry Falwell, Jr., and Donald Trump proves, they’re now apparently willing to work with anybody who can advance their interests.

RNS: Some have talked about a split between “elite evangelicals” and “ordinary evangelicals.” They point out that real divide is between the professional, educated, leadership class and those who are church-attending, pew-sitting, Trump-voting evangelicals. What do you think?

JS: As an elite evangelical who despises Donald Trump, of course I’d like to think that all right-thinking people agree with me! But I’d have to see serious data to believe that. I know too many college-educated American evangelicals who held their noses and voted for Trump to believe that class is the main dividing line here. 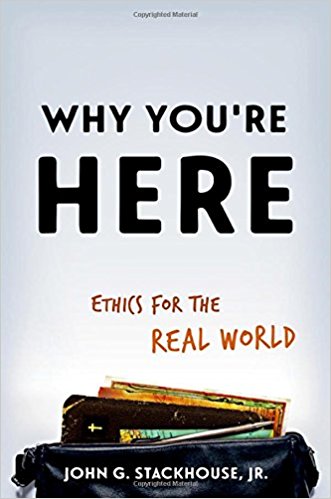 RNS: Look into the future and tell me what you see. What does the future of evangelicalism in the Western world look like in 25 years?

JS: The Western world is pretty big, and evangelicalism is going to proceed apace, no matter what happens in the U.S. Continued immigration of fervent Christian Koreans and Chinese people throughout the Anglosphere and beyond is going to revitalize and reshape evangelical fellowships heretofore dominated by people of northwest European heritage. Pentecostal-charismatic Christianity is going to mature: last summer I enjoyed discussion with serious people about theological education at, of all places, Hillsong (the hipster megachurch in Sydney, Australia). And the prosperity gospel is going to continue to confuse and distract people from authentic Christianity, even as many will tire of its nonsense and then, I hope, seek out a realistic form of faith.

Evangelicalism is a populist tradition, so big churches and big-name pastors will keep setting the pace. But when those pastors look more like New York’s Tim Keller, Chicago’s Bill Hybels, and Atlanta’s Andy Stanley, and less like the abrasive Mark Driscoll and the heavy-handed John Piper, there are grounds for hope that even mainstream white evangelical culture can improve.

RNS: You’ve written a book on ethics. That is, how to live rightly. What advice would you give your fellow evangelicals on how to live the Christian life in our current moment?

JS: The best thing about evangelicalism is its relentless focus on Jesus Christ. Not on “God-in-general” or even on the define-him-however-you-like Holy Spirit, but the very particular person of Jesus Christ. The next best thing about evangelicalism is its commitment to the Bible. If the Bible really says it, I will try to believe it, and that should settle it.

The combination of a Christ-centred piety and a Scripture-centred epistemology is a powerful and healthy alternative to what else is being offered out there. I certainly don’t mean to reduce Christianity to just Jesus and Bible. But evangelicalism in my view puts first things first.

And a lot of interesting ethical conclusions can be derived from those commitments, as I detail in this book—such as, for instance, grounds for dealing with corrupt regimes, with stupid bosses, with frustrating institutions, and with murderous enemies. Not platitudes, nor even a set of subtle principles, but actually hearing, as Dietrich Bonhoeffer wanted us to do, the voice of Jesus here and now so as to do what he wants us to do.

And that, as the great evangelical preacher John Stott used to say, is just basic Christianity.