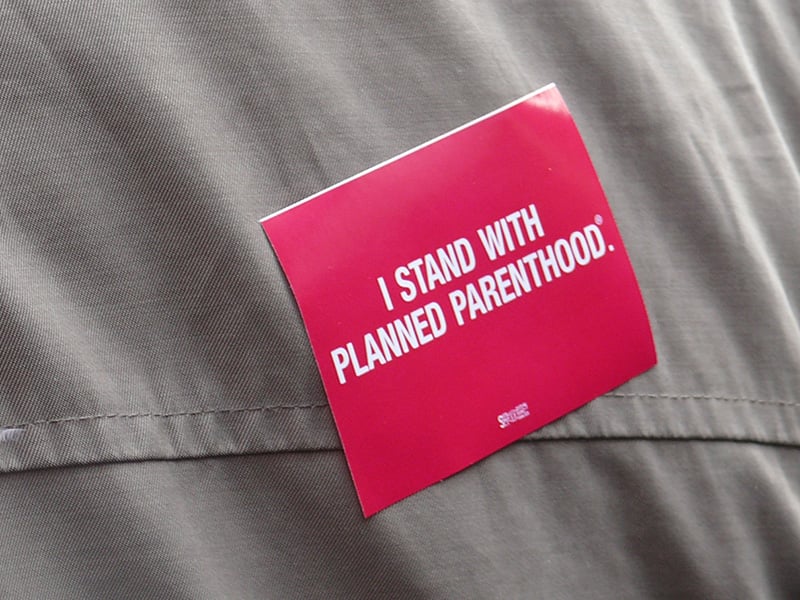 A sticker from a Planned Parenthood rally in New York City in 2011. Photo courtesy of Creative Commons
February 9, 2018
Associated Press

GREENWICH, Conn. (AP) — A student at a Roman Catholic school in Connecticut was told to remove a Planned Parenthood sticker from her laptop or she wouldn’t be allowed to re-enroll, her parents said.

The “I stand with Planned Parenthood” sticker was one of several on Sacred Heart Greenwich sophomore Kate Murray’s laptop.

Brian and Tracy Murray told the Greenwich Time on Thursday (Feb. 8) that their daughter removed the pro-abortion rights group’s sticker so she could attend class this week but hasn’t decided if she’ll stay long term.

“It is a small sticker,” Tracy Murray said. “It is not incendiary. It is not vulgar. It is not hurtful.”

Brian Murray said the sticker addresses a political issue about government funding and does not violate church doctrine.

The school’s head, Pamela Hayes, wouldn’t discuss the situation directly but wrote that the school discourages the display of anything “supporting or opposing political candidates, positions or organizations.”

“Open dialogue is alive and well on our campus and that’s why we discourage the displays of slogans and bumper stickers, which in an educational environment can have the unintended consequence of stifling open debate,” Hayes wrote on the school’s website. “We know there are better forums.”

The outgoing president of Planned Parenthood, Cecile Richards, tweeted her support for the student, saying, “Keep fighting for what you believe in.”

The all-girls school is not a diocesan school, but the Bridgeport Diocese has said it supports the decision. A statement from the diocese says the school should affirm the church’s opposition to abortion while respecting the right of students to raise questions about moral issues.