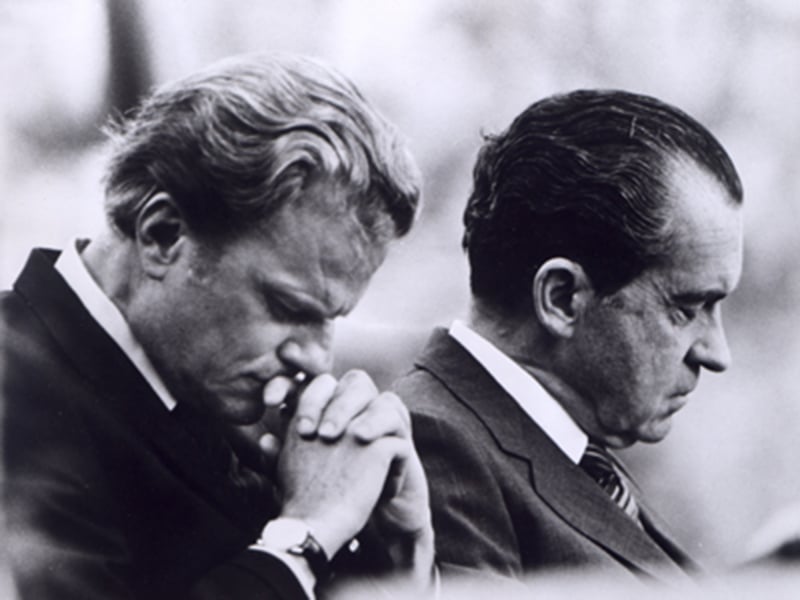 WASHINGTON (RNS) — Conservative Christian leaders have President Trump's ear, but they are certainly not the first evangelicals to counsel the leader of the free world. The most famous evangelist of the 20th century, Billy Graham, advised many an American president, though differently than Trump's faith advisers approach the job.

When news broke on Wednesday (Feb. 21) that Billy Graham died at age 99, social media was awash with warm reflections on his legacy from evangelical leaders as well as prominent politicians — including Barack Obama and Donald Trump.

Few mentioned Graham's political affiliations (he was a registered Democrat who often supported Republicans), and National Association of Evangelicals President Leith Anderson championed how he "transcended political and religious differences to faithfully proclaim the gospel of Jesus Christ.” But when Graham was an up-and-coming preacher wearing hand-painted ties, and later, when he was America's leading Christian evangelist in the heart of the Cold War, everyone knew where he stood on politics.

Graham railed against communism and anti-war demonstrators. He helped presidential candidates and gave them advice once they made it to the White House.

Over the years, Graham spoke to an estimated 84 million people at his crusades around the world, his wide reach increasing to 215 million when it includes live audiences that watched him via satellite. His success, religious historians say, was a precursor to the political rise of evangelicals and set the stage for recent faith-based public discourse on abortion, gay marriage and other issues.

As other conservative religious figures such as late Rev. Jerry Falwell, religious broadcaster Pat Robertson and others gained sway in the political arena, Graham deliberately withdrew from it, at least in public. His focus was on the gospel, not politics, when he visited Flushing Meadows Corona Park in June 2005. "If I get up and talk about some political issue, it divides the audience," Graham said at a news conference preceding the New York crusade. "What I want is a united audience to hear only the gospel. Many times (in the past) ... I went too far in (dividing people on) such issues, and I think this time I want to stick only to the gospel."

The substance of Graham's crusades changed little, aside from the addition of Christian rock and hip-hop music, said William Martin, author of "A Prophet With Honor," a biography of Graham. They still involved singing by George Beverly Shea, who became part of Graham's inner circle in the 1940s, and ended with Graham speaking for 20 to 30 minutes and asking people to respond to his "invitation" to convert. (Shea died in 2013 at the age of 104.)

Graham's son Franklin has spoken publicly against Islam in recent years, garnering the type of publicity his father studiously avoided since the 1970s after his association with President Nixon hurt his reputation. Since then, as evangelicals have increasingly linked themselves to the Republican Party, Graham cautioned religious leaders not to align too closely with any political program.

Franklin Graham in particular has joined Jerry Falwell Jr., Falwell Sr.’s son, and other evangelical leaders as a critic of President Obama and frequent public defender of Trump. Franklin Graham backed the business mogul’s proposal to bar Muslims from entering the United States (he said it was “not a Bible issue”), deflected criticism of Trump following race-related violence in Charlottesville, Va. (Graham shamed politicians for trying to “blame” the president), and dismissed accusations about the president’s alleged extramarital affair (Graham called Trump a “changed person”).

"Billy Graham ... has been unwilling to draw lines that would alienate other people or rule them out of his circle," Martin said. "Many of the other conservative Christians who are involved in politics are not only willing to do that; they seem bent on doing that." Graham gained White House access in his 30s and advised Presidents Eisenhower, Johnson and Nixon on politics.

After Graham's stature grew in the 1940s and 1950s with well-publicized crusades in Los Angeles, Washington, New York and Britain, presidents found it in their interest to meet and be seen with him. He used the access to offer political advice that belied a professed desire to avoid taking sides, Martin wrote in his book.

While Graham rarely endorsed candidates, from the 1950s to the 1970s "he was more partisan than he let out," said Mark Noll, a professor of history at the University of Notre Dame in Indiana. "He did keep politics out of his public messages, but he wanted to take a part in public life, and the engines of publicity were there for somebody who was charismatic and could keep out of scandal like Graham."

Graham had a close association with Nixon, and the president's downfall shocked Graham in many ways, not the least of which was the profanity that Oval Office tapes showed Nixon freely used, according to Martin. The release of other tapes almost 30 years later dealt an embarrassing blow because they showed Graham speaking with Nixon negatively about Jewish news media figures in ways many Jews found offensive. Graham apologized repeatedly for the comments about Jews and for becoming too close to power.

His humility earned praise for his character, said Leo Sandon, professor emeritus of religion and American studies at the University of Chicago Divinity School.

"At times when Billy Graham, I thought, was showing the worst judgment, which in my opinion would be ... with Nixon, even then, no one ever doubted his integrity, his honesty," Sandon said. "His greatest problem was a lot of celebrity and publicity. He loved to be in that White House."

It helped Graham's recovery, Martin said, that he had since led global conferences — including two in the Netherlands in the 1980s — to bring Christians of various denominations together and help ministers preach. Graham's willingness to associate with liberal mainline Protestants led to a break with Christian fundamentalists.

Through the years, his views became less conservative on many issues social conservatives care about most. According to "A Prophet With Honor," Graham remained generally conservative but believed administration of the death penalty is biased against poor people. He regarded homosexuality as sinful "but no more so than adultery" and said, "There are worse sins."

At a time when many conservative Christian leaders were trying to focus public concern on secularism and gay marriage, Graham stressed poverty as the most pressing social issue.

But more recently, Graham's messages on social issues waded into the political fray, leading some observers to speculate that his outspoken son played a role in his father’s political participation. (Franklin Graham’s hard-line stance on homosexuality and Islam was cited by lawmakers in the United Kingdom who called for him to be banned from their country for "hate speech.")

In 2012, in a prayer letter released by his ministry, Billy Graham decried abortion and “a lack of shame over sin” and took a more prominent role in partisan politics, after years of public avoidance.

That same year, as voters in North Carolina considered an amendment to the state constitution stipulating that marriage was between a man and a woman, a full-page ad taken out in several papers quoted Billy Graham saying:

(A version of this story ran on Billy Graham's 99th birthday.)

Related Posts
By Ira Rifkin
As Dalai Lama turns 85, his lineage’s future is as uncertain as Tibet’s
By Alejandra Molina
‘Your fight is my fight’: Latino clergy and faith leaders rally behind Black Lives Matter
By Jack Jenkins
In the wake of rocky polling, Trump camp doubles down on conservative Christians
By Jack Jenkins
Mitt Romney joins thousands of evangelicals marching against racial injustice in DC
By Timothy Keller
How Ravi Zacharias changed the way evangelism is done