(RNS) — For evangelist Billy Graham, it all came down to the “invitation,” the climactic point at the end of his crusades when he invited people to leave their seats and “make a decision for Christ.” 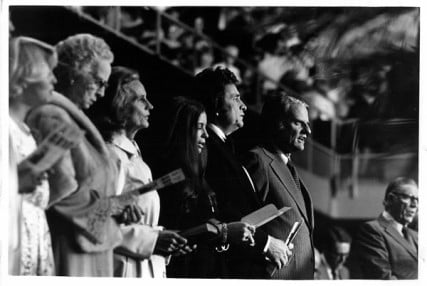 And it wouldn’t be a Billy Graham invitation without “Just As I Am,” the slow-moving, soul-moving hymn that accompanied millions down the aisle and became Graham’s signature anthem and title of his 1997 autobiography.

“Just as I am, without one plea, but that thy blood was shed for me,” the hymn’s familiar first verse goes. “And that thou bidd’st me come to thee, O Lamb of God, I come, I come.”

But “Just As I Am” was more than a favorite Graham hymn. It became — almost more than any other hymn — a sort of national anthem for evangelical Christians, a musical creed that laid out in simple terms the life-changing spiritual transaction between the sinner and the Redeemer.

“We always began with ‘Just As I Am’ because Billy felt it was the most effective invitation hymn, inviting people to make a commitment to Christ,” Cliff Barrows, Graham’s longtime musical director, said in a 2005 interview.

The hymn was written in 1835 by a British woman, Charlotte Elliott (1789-1871), who had convinced herself that her physical disabilities left her nothing to offer God at midlife.

As one version of the story goes, Elliott was struck by the words of a minister who asked whether she had truly given her heart to Christ. The question at first bothered Elliot, and after some days she told the minister that she wanted to serve God but didn’t know how. He replied, “Just come to him as you are.”

The hymn was originally written as a poem to raise money for a local hospital. It was first published in 1841 and then wedded with its familiar tune in 1849 by American William Bradbury. It soon soared in popularity in 19th-century evangelical revivals in the U.S. and Great Britain.

“The refrain in each stanza — ‘O Lamb of God, I come, I come’ — is essentially a vehicle for moving people down the aisle to the point where the preacher is waiting to receive them,” said Carl Daw Jr., former executive director of the Hymn Society of the United States and Canada.

By 1925, it appeared in at least 20 separate hymnals. In Daw’s survey of hymnals published between 1976 and 1996, it was found in 30 of 40 hymnbooks. Only Christmas carols were more popular.

Graham’s personal connection to the hymn began at the pivotal moment in his life, when in 1934 he experienced his own conversion in Charlotte, N.C. But it was actually the second hymn that was sung, “Almost Persuaded, Now to Believe,” that prompted Graham down the aisle.

“On the last verse of that second song, I responded,” Graham wrote in his autobiography. “I walked down to the front, feeling as if I had lead weights attached to my feet, and stood in the space before the platform.”

Nevertheless, “Just As I Am” soon became Graham’s go-to hymn for his own crusades. In fact, the one time he didn’t use it, preferring instead to let the Holy Spirit move people out of their seats in silence at a 1966 crusade in London, there was a near mutiny from the press corps. 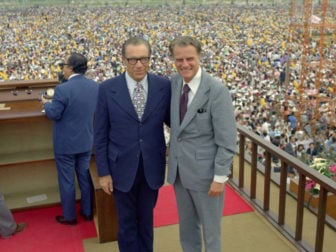 Over the years, the hymn came to embody Graham’s easy invitation style that never featured much fire-and-brimstone rhetoric. It was more like a lullaby, moving softly over the crowd like the mists rolling over Graham’s beloved North Carolina mountains.

“There is no coercion in this hymn, no wailing at heaven’s gates because you are still a sinner,” said C. Michael Hawn, director of the Sacred Music Program at Perkins School of Theology in Dallas. “The message is a more positive one of unconditional acceptance.”

Although the hymn was well-known long before Graham, it became so popular partly because Graham used it so much. At the same time, it became a beloved favorite of his associates and rank-and-file Protestants everywhere.

George Beverly Shea, Graham’s longtime crusade soloist, recalled a harrowing flight out of Newark, N.J., in 2000 when he wasn’t sure if he would ever touch the ground again. Clutching his wife’s hand, he started to pray the text of the hymn.

Over the years, the song was embraced by evangelicals for its simplicity. Like “Amazing Grace,” said Mark Noll of the University of Notre Dame, it embodied the essence of evangelical theology. “They’re not deep hymns,” he said, “but they’re solid hymns.”