The gun isn’t new; he’s had it for years. But it was not until the shooting rampage nearly four months ago that killed more than two dozen at First Baptist Church including a pregnant woman — and his own daughter — that he began wearing it regularly, in a holster on his hip.

As fresh mass shootings such as the one at Marjory Stoneman Douglas High School in Parkland, Fla., which killed 17, reopen debates about gun control, members of this  Southern Baptist congregation are relying on what they hope is added safety plus  ongoing prayer as they move forward.

At this 92-year-old congregation near the town’s one blinking red light, many members believe God allowed the Nov. 5 massacre to happen as — in Pomeroy’s words — “blood’s seed for revival.”

Those beliefs couldn’t be more different from those of the Florida teenagers who believe they can reform an American political culture that has resisted curbs on the availability of weapons.

Pastor Frank Pomeroy wears a pistol in a holster on his hip during Sunday worship at First Baptist Church in Sutherland Springs on Feb. 18, 2018. RNS photo by Yonat Shimron

Here in Sutherland Springs, a few days earlier at a Sunday morning Bible study, Pomeroy told members that for Christians, prayer, not protests, is the primary Christian response.

“When I see the aftermath of what’s happening in Florida, I thank God for your faith here,” said Pomeroy. “I am just thankful that we chose to lift up God, rather than man. Pray for those who are truly involved, not all the secondary people that are getting the noise on TV.”

That prayer has been constant and heartfelt: The names of the survivors and their families are listed in each week’s church bulletin. And numerous prayer services have been held — sometimes jointly with other churches — to support and strengthen the grieving and the wounded.

It’s not that the people of Sutherland Springs haven’t talked about guns. But mostly there have been debates about whether a church member with a gun might have stopped the shooter.

“The main conversation is, ‘If this, or if that,'” said Judy Green, who manages the church’s food pantry. She and her husband were running an errand on the morning of the shooting and were instructed to stay in their car as they approached the church.

For Green, that resistance to engage the gun control debate is understood.

“It’s a Bible-based church,” she said.  “We study strictly out of the Bible.”

An outpouring of goodwill

On Nov. 5, a 26-year-old former U.S. Air Force airman drove to Sutherland Springs with a mission. He wanted to kill the mother of his estranged wife and take down as many others as possible. He failed on the first count. Michelle Shields wasn’t in church that day. But he succeeded on the second.

The assailant knew the church well and had attended a fall festival there less than a week before. Armed with a semi-automatic rifle, he sprayed the church with bullets during Sunday services, killing congregants, including Pomeroy’s daughter, Annabelle, whom they adopted at age 2.  The pastor and his wife were away that weekend.

A local man shot the killer as he fled the scene. He was later found dead in his car from a self-inflicted gunshot wound about eight miles from the church.

Overnight, the rural unincorporated town in Wilson County, with its median household income of $40,000, was deluged with media from all over the world. Vice President Mike Pence paid a visit. Area churches and charities responded with an outpouring of food — pallets of water bottles, casseroles in aluminum trays, boxes of cookies — more than the congregation could ever consume.

After burying its dead, the church turned to tending the wounded.

The old, bullet-scarred sanctuary was turned into a memorial where people can come to pray or receive grief counseling. Around it, the chain-link fence has become a kind of shrine to those killed, adorned with banners, flowers, candles and stars. 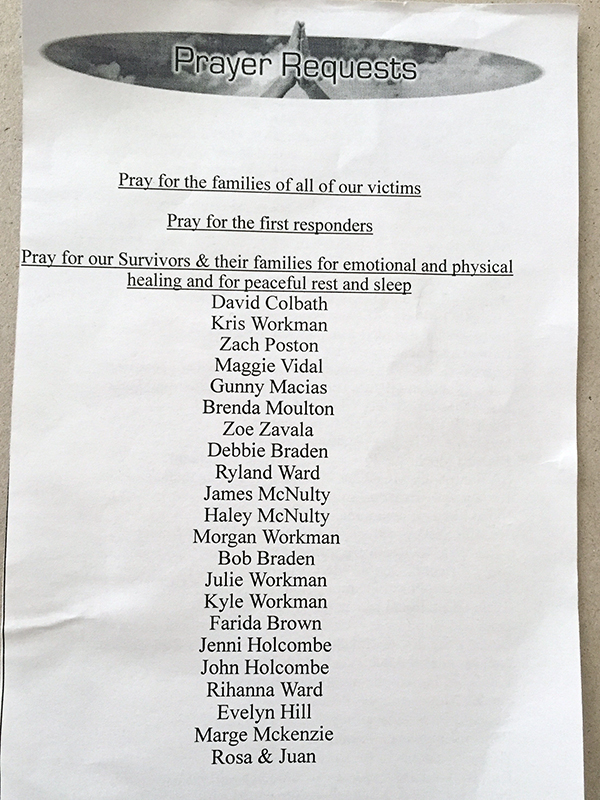 The weekly prayer request list features the names of survivors and their families and appears in each church bulletin. RNS photo by Yonat Shimron

The first few weekends after the shooting, well-wishers and members of other congregations thronged the church in solidarity, swelling the ranks. Services now average about 170, more than the church’s 140 members. Thirty new members have joined, more than replacing those that were killed.

The weekly bulletin exhorts members to pray for “healing and for peaceful rest and sleep” for the survivors. Its “prayer requests” listing of 22 survivors and their families remains the same week in, week out.

But the church has also installed security cameras and exterior lighting.

And more changes are on the way. On March 1, the church will review architectural drawings for a new permanent sanctuary. (The Southern Baptists’ North American Mission Board is largely funding the project, expected to cost $1 to 1.5 million.)

Two weeks ago, a group of 22 women went on a “ladies retreat” in the Texas Hill Country paid for by a Southern Baptist camp and conference center.

Sherri Pomeroy, the pastor’s wife, acknowledged she didn’t want to go. But at a church service, she said the time away helped her come to terms with the massacre.

In this congregation, church members are searching for signs of redemption. 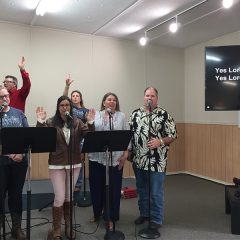 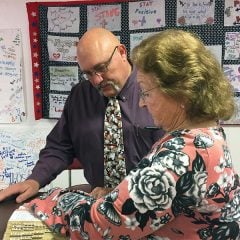 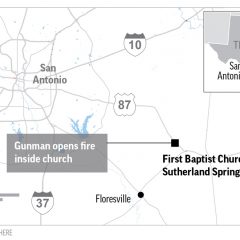 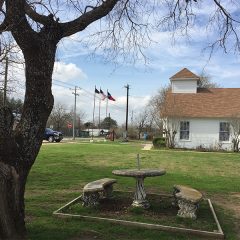 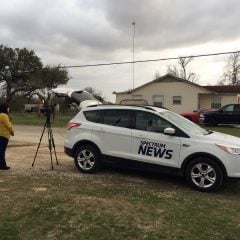 News media are still a fixture outside the church in Sutherland Springs. RNS photo by Yonat Shimron

On a recent Sunday, the congregation welcomed back Juan “Gunny” Macias, the last person to be released from the hospital after the massacre. He walked into services with an IV drip draped over his walker.

The homes of seven other survivors are being remodeled to make them wheelchair accessible. Among them is Kris Workman, the church’s worship leader.

Workman, who plays lead guitar in the band, was shot twice; one bullet fractured his L2 vertebra; the other nestled in soft tissue in his hip. He can no longer walk but said he is recovering some muscle control in his legs.

On a recent Sunday, after leading the band in a mix of hymns (“The Old Rugged Cross”) and praise songs (“I Exalt Thee”), he sat beaming. Kris Workman, the church worship leader at First Baptist Church in Sutherland Springs, Texas, was wounded in the November shooting and now uses a wheelchair. RNS photo by Yonat Shimron

“The way I see it, the loss of control of my legs is just a small price to pay to see the revival and outpouring that has come from this,” Workman said. “What Satan intended for evil, God spun for his glory.”

Workman, who is 34, married, with a 3-year-old daughter, said he expects to return to work soon as a manager at Rackspace, a managed cloud computing company in Windcrest, north of San Antonio.

He credited the H-E-B grocery chain with sending out construction crews to build a ramp and remodel the bathroom in his home.

Workman echoes his pastor who spoke of “the blood seed that was spilled here for revival.” In recollecting the day of the shooting he said he saw God at work:

“Even while it was happening, I was able to see God saying, ‘Not this one. Spare this one. I’m taking this one home. This one’s coming home, too.’ When you can see God working that granularly, it just strengthens your faith so much. I’m just happy to be alive and happy to share my story.”