(RNS) — Billy Graham — who died Wednesday (Feb. 21) at age 99 — met with 13 American presidents, from Harry Truman to Donald Trump. Quotes from interviews, correspondence and other writings give a glimpse into the evangelist’s relationship with each successive occupant of the Oval Office.

“Don’t worry about it. I realized you hadn’t been properly briefed.”

— Billy Graham in his autobiography, “Just As I Am,” recalling Truman’s acceptance of his apology in 1967 for his actions during a White House visit years earlier

“Billy, you’ve told me how to be sure my sins are forgiven and that I’m going to heaven. Would you tell me again?”

— Graham, in “Just As I Am,” recalling a question posed by Eisenhower months before his death in 1969

“Very interesting. We’ll have to talk more about that someday.”

— Graham, in “Just As I Am,” recalling Kennedy’s response to his explanation of the Second Coming of Jesus Christ, which Kennedy had asked Graham to discuss after a golf game a few days before Kennedy became president in 1961 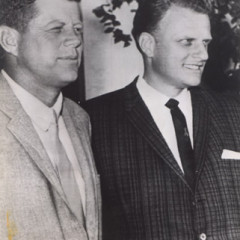 Shortly before his inauguration as the first Roman Catholic to be elected President of the United States, John F. Kennedy welcomed evangelist Billy Graham at his Palm Beach home for an afternoon of discussion and golf in 1961. RNS file photo 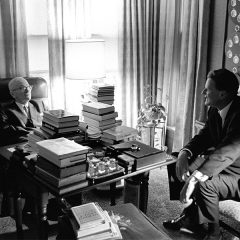 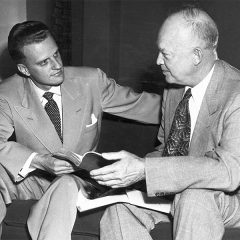 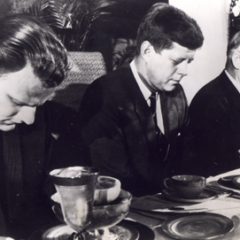 Evangelist Billy Graham, center, is flanked by GOP Presidential candidate Richard Nixon, right, and Gov. Spiro T. Agnew, the vice-presidential choice, left, as he delivers the benediction at the Republican National Convention in Miami Beach in 1968. Mr. Graham prayed for the unity and welfare of the nation. Religion News Service file photo. 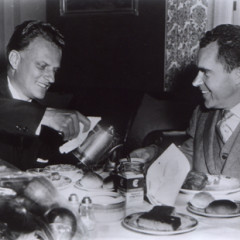 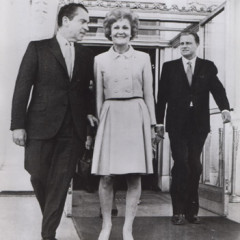 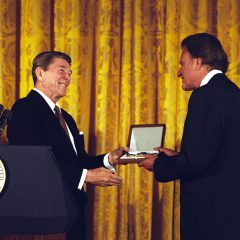 President Ronald Reagan presents the Presidential Medal of Freedom (the highest award the president can bestow on a private citizen) to Billy Graham on Feb. 23, 1983, for his “exceptional contributions to the United States on behalf of world peace.” Photo courtesy of Billy Graham Evangelistic Association 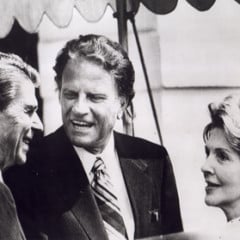 Billy Graham is welcomed to the White House on July 18, 1981 by President Ronald Reagan and First Lady Nancy Reagan. 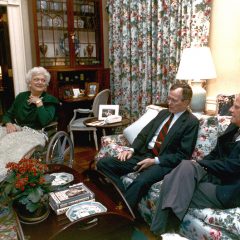 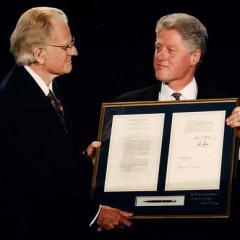 Billy Graham with President Bill Clinton in an undated photo. Photo courtesy of The White House 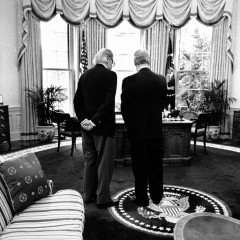 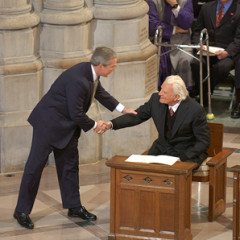 “Your message met the need. The knowledge that one of God’s greatest messengers was seeking Divine Counsel on my behalf provided me with a strong source of strength, courage and comfort. … I shall cherish this in the days ahead.”

— Johnson, writing to Graham after the evangelist sent a telegram saying he was praying for the president after Kennedy’s assassination in 1963. Noted in “The Preacher and the Presidents” by Nancy Gibbs and Michael Duffy.

“I have deeply appreciated the spiritual inspiration and guidance you have given me but, in addition to that, your political advice has been as wise as any I have received from any man I know. I have often told friends that when you went into the ministry, politics lost one of its potentially greatest practitioners.”

— Nixon, in a letter to Graham after Nixon was defeated by Kennedy in 1960. Noted in “The Preacher and the Presidents” by Nancy Gibbs and Michael Duffy.

“During the election period, I prayed constantly that ‘God’s will’ be done. This was the prayer of Jesus the night before the cross. He said, ‘not my will but Thine be done.’ For some mysterious reason unknown to us, Mr. Carter won.”

— Graham, in a letter to Ford after he was defeated by Jimmy Carter in 1976. Ford saved the letter, reported Nancy Gibbs and Michael Duffy in “The Preacher and the Presidents,” for his personal scrapbook.

“Ruth and I came away with a new insight into the dedication of both of you to the causes of not only peace and justice in the world, but your evangelistic urgency. We are deeply grateful for your spiritual leadership and boldness in witnessing for Christ. We have vowed to pray for you more often that God will continue to give you wisdom, courage, faith and guidance in the months ahead.”

— Graham, in a letter dictated to his wife, Ruth, and sent to Jimmy and Rosalynn Carter after the Grahams spent the night at the White House in 1979

“God gave you a marvelous charisma that did not come just from your Hollywood days as some would like to assert. It came from something God gave you. No matter how bad the circumstances or how harsh the questions from the reporters were, you always had a smile, you had a way of saying the right thing. I doubt if America will ever see another Ronald Reagan.”

— Graham, in a letter to Reagan as he concluded his second presidential term in 1989, reported by Nancy Gibbs and Michael Duffy in “The Preacher and the Presidents”

“Presidents need comfort that faith gives and Billy Graham was a great dispenser of comfort.”

“What he wanted me to know was that the Christ he believed in was a God of second chances.”

“Before I left, Reverend Graham started praying for me, as he had prayed for so many presidents before me. And when he finished praying, I felt the urge to pray for him. I didn’t really know what to say. What do you pray for when it comes to the man who has prayed for so many? But like that verse in Romans, the Holy Spirit interceded when I didn’t know quite what to say.”

— Barack Obama, speaking at the 2012 National Prayer Breakfast and recalling his visit to Graham’s home

“Melania and I were privileged to get to know Reverend Graham and his extraordinary family over the last several years, and we are deeply grateful for their love and support.

“Billy Graham was truly one of a kind. Christians and people of all faiths and backgrounds will miss him dearly. We are thinking of him today, finally at home in Heaven.”

— President Trump, in a Feb. 21 statement on the death of Billy Graham