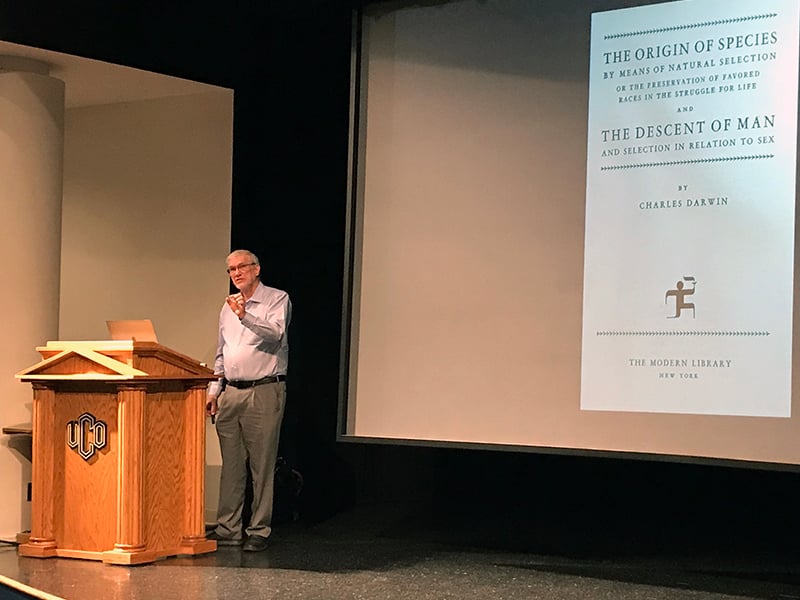 EDMOND, Okla. (RNS) — Students at the University of Central Oklahoma got a lesson in free speech as the 16,000-student public university welcomed a presentation by Ken Ham, a nationally known creationist who rejects Charles Darwin’s theory of evolution.

The lecture Monday (March 5) by the founder of the Ark Encounter — a $102 million, 800-acre Noah’s Ark theme park that opened in Williamstown, Ky., two years ago — came weeks after the university’s student government association rescinded an invitation for Ham to speak on campus. Some students, who deem Ham homophobic, objected to student funds being used to bring him to campus.

After the student group’s decision made national headlines, UCO President Don Betz stepped in and reinvited Ham to offer his talk on “Genesis and the State of the Culture” at the public university’s Constitution Hall.

Betz cited the historic commitment of the 127-year-old university, about 15 miles north of Oklahoma City, to critical and civil examination of ideas, no matter how controversial. And ultimately, Betz funded Ham’s $4,500 fee through unrestricted donations made to the university by individuals and organizations, said Adrienne Nobles, a UCO spokeswoman.

“No tuition or state-appropriated funds were used,” Nobles said.

Ham is president of the Christian apologetics organization Answers in Genesis, which also owns the $27 million, 75,000-square-foot Creation Museum, west of the Cincinnati Airport in Petersburg, Ky.

“We have generations today that are so secular in their thinking, and they have this idea that you have to embrace all views," he added. "But, of course, they don’t want to embrace my view that I start with the Bible, and I have a particular worldview because of that.”

Ham said his only surprise was that the furor involved a university in the heart of Bible Belt Oklahoma: The socially conservative state of 3.9 million residents is known as one of the reddest of the red states. Nearly two-thirds of voters (65.3 percent) supported President Trump in the 2016 election, the third-highest proportion behind Wyoming (68.2 percent) and West Virginia (67.9 percent).

Last month, Stockton Duvall, UCO’s student body president, cited “bullying” by gay-rights activists as a contributing factor in his decision not to move forward with a speaking contract with Ham.

The idea for his visit to UCO came from a student group called Valid Worldview, which is associated with Fairview Baptist Church in Edmond. Ham gained fame not only through his theme park, website and museum, but his 2014 debate with “Science Guy” Bill Nye, which was watched by millions.

Ham believes God created Earth about 6,000 years ago, while scientists say the planet formed some 4.5 billion years ago.

Duvall said he was dismayed by the reaction of some of his fellow students to the invitation to Ham.

“I am not the first person to be personally attacked by a very vocal group on campus that has little tolerance for opposing viewpoints,” Duvall said in a Feb. 7 statement on Twitter. In his own statement, Ham said activists had opposed him speaking because of his belief that marriage is between one man and one woman.

Rachel Watson, president of UCO’s Student Alliance for Equality or "SAFE," a group that supports LGBTQ students and faculty, told Religion News Service on Monday that her organization also supports free speech and was not involved in pressuring the student government association.

“We do support his right to free speech and his right to express his ideas,” Watson, who describes herself as queer, said of Ham.

Watson said she neither attended Ham’s presentation nor protested it.

Joe Hight, a Pulitzer Prize-winning former newspaper editor who holds the the E.K. Gaylord Endowed Chair of Journalism Ethics at UCO, said the controversy is not just over the question of free speech but also whether student activities funds should be used to cover Ham’s fee.

The forum held by the university Monday and Tuesday was titled “The Freedom of Expression: Teaching and Learning in Our Time.” Sessions tackled civil discourse under the First Amendment and freedom of speech and expression at public universities, UCO officials said.

“That, to me, is so important — no matter if it’s Ken Ham or if it’s another speaker —  that we’re constantly thinking about the importance of the First Amendment and the rights we’re guaranteed in this country,” the journalism professor said. “And that we all should come together at times to hear different perspectives in this country.”

Before Ham spoke, Charlie Johnson, vice president of university communications, welcomed the crowd and warned that anyone causing a disruption could be removed.

“I am proud to say that this is a place where the free exchange of ideas is encouraged,” Johnson said of UCO, which was founded in 1890 and is the state’s third-largest public university.

“Amen!” someone shouted — a frequent refrain by some audience members during Ham’s discussion of the creation account in the Bible’s Book of Genesis.

University police cars were highly visible outside the venue. Inside, officers stood watch at the top and bottom of the lecture hall. However, Police Chief Jeffrey Harp said he knew of only one or two protesters who showed up. No one was arrested.

If any opponents of Ham’s message came to his presentation, they seemed to maintain the respectful decorum requested. No boos were heard.

At the end, Ham and Answers in Genesis faculty member Georgia Purdom, who earned a doctorate in molecular genetics from Ohio State University, answered written, anonymous questions from the audience.

One questioner — a self-described “spirit-filled Christian” and member of the LGBTQ community — said: “I sought the Lord and churches for why I feel attracted to the same sex. I found the church nor churches’ traditional view on (LGBTQ) fit my experience of hearing the Lord speak directly to me. Science, not the church, gave me peace. How can you say my experience of still being a child of God isn’t valid?”

Ham said he would start by asking how the person heard from God: “My way of dealing with that would be to say, ‘Let’s judge what the actual written word of God says. Let’s judge what you’re saying against what it says.’

“Because I have a different worldview in relation to marriage and gender doesn’t mean I hate that person,” Ham added. “Sometimes, people accuse us of hate speech because we disagree with them. It’s a clash of worldviews. That doesn’t mean we hate someone. In fact, the Bible commands us to love everyone, and that’s what we do.”

SAFE’s Walker was raised Southern Baptist but isn’t active in a congregation. She said she’s not concerned with how Ham views marriage.

“In the Old Testament, there are a lot of different kinds of marriages that take place,” she said, mentioning polygamous marriages and brothers expected to marry a deceased sibling’s widow.

Another student, McKay Bronn, who describes herself as Christian, said the First Amendment gives Ham the right to speak and students who don’t like his message the right to protest his speech.

“I was home-schooled, so I was always raised on creationist-type philosophy and comparing that to evolution. So, I was just curious to hear what he had to say,” Bronn, a 21-year-old accounting and forensic science major, said of why she came to Ham’s presentation.