(RNS) — When you think about the great theologians, what names come to mind?

Those who have profoundly impacted my theological foundation include the Rev. James Cone, philosopher Cornel West, the Rev. Eboni Marshall Turman and theologian Christopher Morse.

Cone, West and Morse were among my professors in seminary so I had the privilege of actually engaging with these revered minds. But is my list, our collective lists of theologians, missing someone?

Why don’t more of us study and think of theological giants like the Rev. Martin Luther King Jr. and his chief of staff, the Rev. Wyatt Tee Walker, as theologians? Social justice luminaries such as King and Walker are somehow viewed only as activists or civil rights leaders — but not as theologians. This is problematic.

If you explore the writings and scholarship of Walker in particular, who died in January at the age of 88, you will discover that he was nothing short of a civil rights icon — but a giant in so many other fields as well.

He was a composer, an ethnomusicologist, affordable housing developer and also one of the most important theologians of our time. He was the author of some 30 books and chapters that cover a rich theological tapestry of topics such as “Living in Hell” and “Spirituality as an Instrument of Social Change.” He taught and mentored countless graduate theological students at Virginia Union University, United Theological Seminary in Dayton, Ohio, and a myriad of other universities as a guest speaker or lecturer.

Take a look at the deep roots of how we (especially within the African-American church) think about G-d, how G-d relates to creation and the contours and purpose of our faith — and you should be compelled to acknowledge and appreciate the writings, teachings and scholarship of Walker as he thrived simultaneously as a social justice activist and theologian.

“For him social justice was his focus of Christianity and you can trace that directly to the gospels,” said the Rev. W. Franklyn Richardson, who gave Walker’s eulogy at his memorial service at New York’s Canaan Baptist Church of Christ, where Walker served as pastor for more than 35 years.

Richardson, chairman of the Conference of National Black Churches and of the board of trustees of Virginia Union University — his and Walker’s alma mater —  added that Walker was also responsible for connecting him and hundreds of other African-American ministers to doctoral studies at United Theological Seminary. 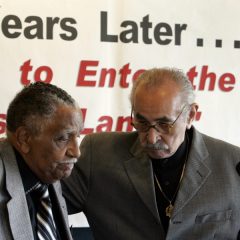 Civil rights leaders Joseph Lowery, left, and Wyatt Tee Walker take to the podium during a rally at the National Press Club in Washington on July 2, 2008, to present a retrospective of where the nation has come in the 45 years since the Rev. Martin Luther King Jr.’s “I Have a Dream” speech. (AP Photo/Susan Walsh) The Rev. Wyatt Tee Walker, integration leader of the Southern Christian Leadership Conference, stands atop a car while speaking with a megaphone to the crowd gathered to protest recent bombing attacks on a motel and another black community leader’s home in Birmingham, Ala., on May 12, 1963. (AP Photo) 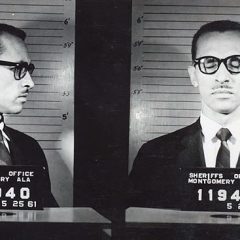 The Rev. Wyatt Tee Walker’s mug shot from Birmingham, Ala., on May 25, 1961. Photo courtesy of Creative Commons

He was “a prophet and professor, a preacher and scholar,” said the Rev. Sherry B. Austin, once a Wyatt Tee Walker Fellow at United Seminary. “He was true to the principles of the church and academia and he combined profundity with simplicity,” she said during the memorial service.

Theologians are important in all our lives. They are the researchers and scholars who write and lecture about the weighty questions we all — people of faith and no faith — contemplate and wrestle with.

For centuries, humankind has looked to theologians in Judaism, Christianity and Islam for answers to our most significant challenges. And over the course of time, seminaries and universities have given us a pantheon of nearly all European, male theologians to revere and esteem. This small corpus of white male religious scholars is considered by some to be the authors but not finishers of our faith. But they are not its last sages.

As we witness the youth in this country speak truth to power, hear women give voice to age-old traumas hiding in plain sight and watch queer and transgender people expand our understanding of G-d’s penchant for diversity, is it not time to open up the list of who is counted among the great theologians?

It is time to hold up more than just the names of dead old white men such as Karl Barth, Reinhold Niebuhr, Abraham Kuyper and Paul Tillich. Theologians such as Walker, who explored the unique religious experience and formation of faith of African-American Christians, must also be studied by anyone seeking to know what faith looks like in action.

Some of Walker’s papers are at the Schomburg Center for Research in Black Culture at the New York Public Library in Harlem, and others have been donated to the University of Richmond. The papers at the Schomburg include unpublished works such as “The Phenomenon of Afrocentric Christian Faith” and his work with the International Freedom Mobilization, a 1979 U.N. conference of African and African-American religious leaders fighting to end apartheid in South Africa.

I advocate for the inclusion of Walker as a giant among theologians in hopes that his work will inspire others to wrestle, debate and formulate their own theologies. In a world filled with so much injustice, the theological works of Walker help us to think critically about how our faith must respond.

(The Rev. F. Romall Smalls is associate minister for social justice at Grace Baptist Church in Mount Vernon, N.Y.; the spiritual care counselor at the Gay Men’s Health Crisis Center; and a senior affiliate chaplain at New York University. The views expressed in this commentary do not necessarily reflect those of Religion News Service or the other institutions listed above.)