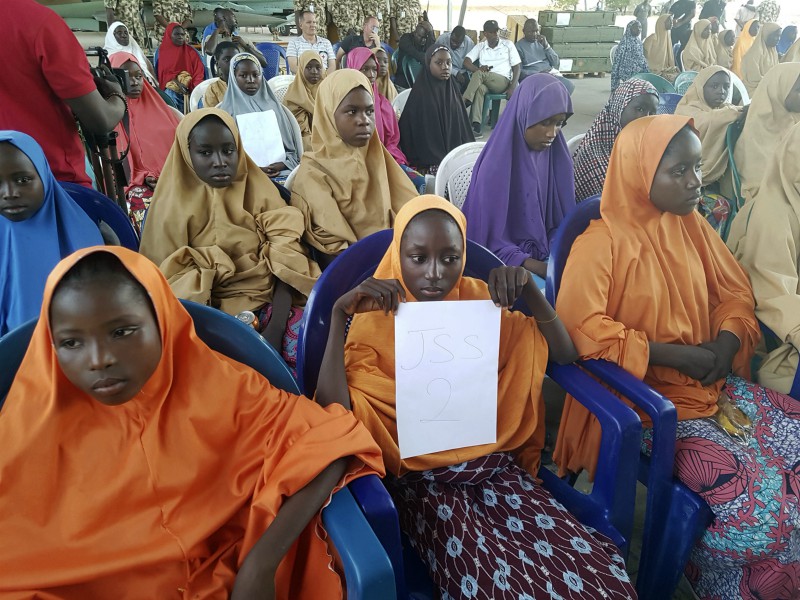 Freed schoolgirls from the Government Girls Science and Technical College Dapchi are photographed during a handover to government officials in Maiduguri, Nigeria, on March 21, 2018. Witnesses say Boko Haram militants have returned an unknown number of the 110 girls who were abducted from their Nigeria school a month ago. (AP Photo/Hamza Suleiman)
March 22, 2018
Sam Olukoya

LAGOS, Nigeria (AP) — The mother of the only Nigerian schoolgirl still in Boko Haram captivity after the extremists released 104 classmates said Thursday (March 22) her daughter was blocked from boarding the vehicle to freedom with her classmates and told to convert to Islam.

"She was about to board the vehicle that was to bring them back. Then Boko Haram said she should convert," the mother said.

Leah Sharibu asked her departing Muslim classmates to pray for her.

President Muhammadu Buhari confirmed that Sharibu was the only schoolgirl still in captivity after the extraordinary release of the girls on Wednesday and vowed that she "will not be abandoned."

Buhari, himself a Muslim, said "true followers of Islam all over the world respect the injunction that there is no compulsion in religion." He added that he looked forward to meeting with the girls who were freed.

The president's statement had no word on five girls still unaccounted for.

Also Thursday, the father of one of the five girls said he has been told his daughter and others are dead.

Inuwa Garba told the AP that friends of his daughter who were freed told him the 16-year-old died from injuries in the frightened stampede that occurred during the mass abduction in Dapchi a month ago.

"They told me five of the girls died and my daughter, who was among them, was the first to die" the day the girls were seized, Garba said. The survivors told him the bodies were buried in the bush.

"I believe what the girls told me because they were all together and saw what happened," he said.

On Wednesday, one 14-year-old released by the fighters told reporters that five girls had died but did not provide details. Maj. Gen. Rogers Nicholas, theater commander, Operation Lafiya Dole, carries one of the freed schoolgirls from the Government Girls Science and Technical College Dapchi during a handover to government officials in Maiduguri, Nigeria, on March 21, 2018. Witnesses say Boko Haram militants have returned an unknown number of the 110 girls who were abducted from their Nigeria school a month ago. (AP Photo/Hamza Suleiman)

The freed girls have been taken to the capital, Abuja, where they are expected to meet Buhari on Friday.

The Boko Haram extremists brought back the girls they had kidnapped from a boarding school, dropping them off with a warning: "Don't ever put your daughters in school again." Boko Haram means "Western education is forbidden" in the Hausa language.

The abductions in Dapchi have evoked painful memories of the tragedy in Chibok, where 276 girls were kidnapped from their boarding school. Nearly four years later, about 100 of them have never returned home. Many had been forced to marry their captors and had children fathered by them.

The Nigerian government denies that it paid a ransom or made a prisoner swap in exchange for the Dapchi girls' freedom. Both occurred before the largest release of Chibok schoolgirls last year.

The latest mass abduction is thought to have been carried out by a Boko Haram splinter group aligned with the Islamic State group that has criticized the leader of the main Boko Haram organization for targeting civilians and has focused instead on military and Western targets.

Nigeria's government under Buhari has repeatedly claimed victory over Boko Haram in recent months, but the extremists continue to carry out deadly suicide bombings in the north, often using young women who have been abducted and indoctrinated.

The Dapchi mass abduction has caused a fresh round of outrage, especially about the protection of schools in a region where Boko Haram has kidnapped thousands of people over nearly a decade.

The release of the girls came a day after an Amnesty International report accused the Nigerian military of failing to heed several warnings of the imminent attack on Feb. 19 during which the girls were seized. The military has called the report an "outright falsehood."