But the musical by composer Andrew Lloyd Webber and lyricist Tim Rice has been around for almost 50 years and has a long production history that has been both triumphant and troubled.

So what’s the back story on this British import being revisited and reimagined on television Sunday night (April 1)? Let us ’Splain …

What is “Jesus Christ Superstar”?

“Jesus Christ Superstar” is a musical play loosely based on the Gospels of the New Testament. It is a kind of late 20th-century Passion play with a late point-of-attack — just as Jesus enters Jerusalem the week before his death. The main characters are all familiar to anyone with a working knowledge of the New Testament — Jesus, Judas, Mary Magdalene, Caiaphas, Pontius Pilate, Herod and the disciples.

But “Jesus Christ Superstar” isn’t really a musical. A musical is a spoken play with sung interludes that advance the plot. “Jesus Christ Superstar” is a “rock opera” — there are no spoken sections in the original version. Lloyd Weber and Rice pioneered the form and wrote a lot of them, including “Joseph and the Amazing Technicolor Dreamcoat,” “Evita,” “Cats” and “Phantom of the Opera.”

Rice, the lyricist, said he was inspired by a verse in the 1964 Bob Dylan song “With God on Our Side“:

Through many a dark hour
I’ve been thinkin’ about this
That Jesus Christ was
Betrayed by a kiss
But I can’t think for you
You’ll have to decide
Whether Judas Iscariot
Had God on his side.

Judas, more than Jesus, is at the center of the drama in “Superstar.” His songs reveal a tortured soul with a divided mind about Jesus, whom he both loves and doubts and will famously come to betray.

Nope. It is way older than most of the audience NBC is aiming at. It was written in 1970 — when your faithful ’Splainer herself was but a mere babe — and first appeared as a concept album (remember those?) that year. The album sold over 3 million copies and was an international sensation.

One of the main reasons for the album’s success (and the fact that this 48-year-old show is still around) is the way Lloyd Webber and Rice — both from Christian backgrounds — approached the Jesus story. Instead of framing his divinity or his ministry, they focus instead on the sociopolitical factors working on him and his followers. The result is a Jesus who is a radical revolutionary fighting against the establishment — a very resonant idea in 1970. 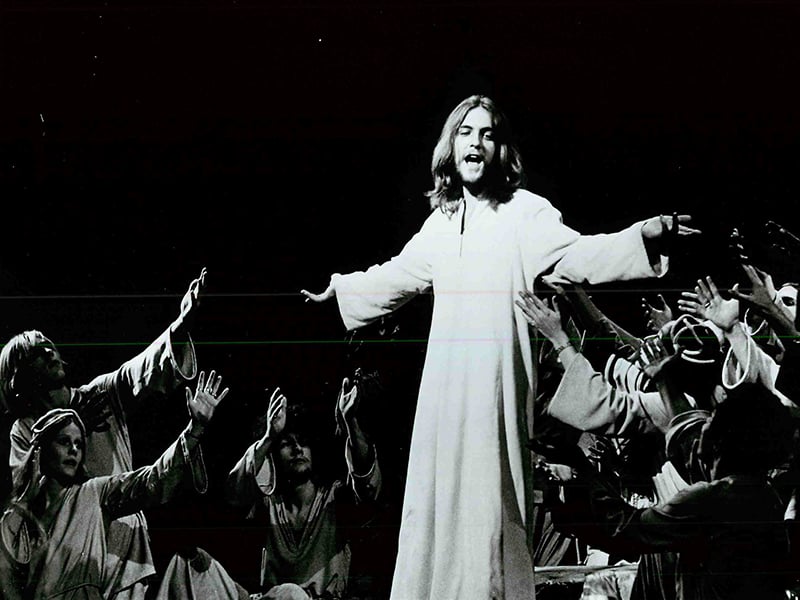 Actor Jeff Fenholt portrays Jesus Christ in a scene from the rock-opera “Jesus Christ Superstar” in 1971. The musical opened at the Mark Hellinger Theatre in New York. RNS file photo

The concept album got the full Broadway treatment in 1971. Some critics hated what they saw as an overwrought production (including a drag queen King Herod), while others lauded the in-your-face reinterpretation of the biblical story and what was then out-of-the-box casting (the African-American Ben Vereen as Judas). The show was nominated for five Tony Awards but cast and creators went home empty-handed.

Wrong.  The opening night was picketed by Christians who saw the suggestion that Jesus and Mary Magdalene had a physical relationship as sacrilege and thought the whole production made a hero of Judas, not Jesus.

Jewish groups were unhappy, too. The American Jewish Committee and the Anti-Defamation League worried the show’s depiction of Caiaphas and Herod as scheming against Jesus would revive charges that Jews were responsible for Jesus’ death.

Lloyd Webber and Rice, who were ages 23 and 26 at the time of the show’s Broadway opening, were upset. “If opera had to be realistic, we would not be able to have a Black Judas, or a half Japanese Mary, or a Jewish Pilate,” Lloyd Weber told The New York Times at the opening night party. “Sure, we’ve taken great dramatic license, but no major trait of character is there that was not in the gospels.”

And Norman Jewison, who went on to direct the 1973 film version, said, “My hope is that audiences will take this for what it is – an opera, not history. These kids are trying to take Jesus off the stained-glass windows and get him down on the street. Some people are not going to like that.”

So what can I expect in the new NBC production?

That’s anyone’s guess. In past productions around the world, Judas and Jesus have been played as lovers; the disciples have been depicted as a band of circus performers and a band of traveling players. Sometimes the show is done in period costume — sandals and robes — and sometimes it is done in modern dress. Several productions have featured female Judases — an added layer of psychological complexity. It’s an “anything goes” kind of show. John Legend, as Jesus, is carried during a dress rehearsal scene from NBC’s “Jesus Christ Superstar Live in Concert.” Photo by Virginia Sherwood/NBC

But the original “Superstar” ends with the Crucifixion. There is no Easter Sunday Resurrection. Will NBC rewrite or restage the ending to leave viewers on a hopeful note?

One thing you can expect: Despite its choice of the sometimes controversial “Superstar,” NBC isn’t looking to alienate any viewers. Its Christmastime 2013 live airing of “The Sound of Music” drew more than 18 million viewers and started a network tradition of producing a live holiday musical. And that proved very lucrative — “Hairspray Live!” brought NBC $24.9 million in 2016 and “Grease Live” brought in $15.7 million for Fox in January 2016.