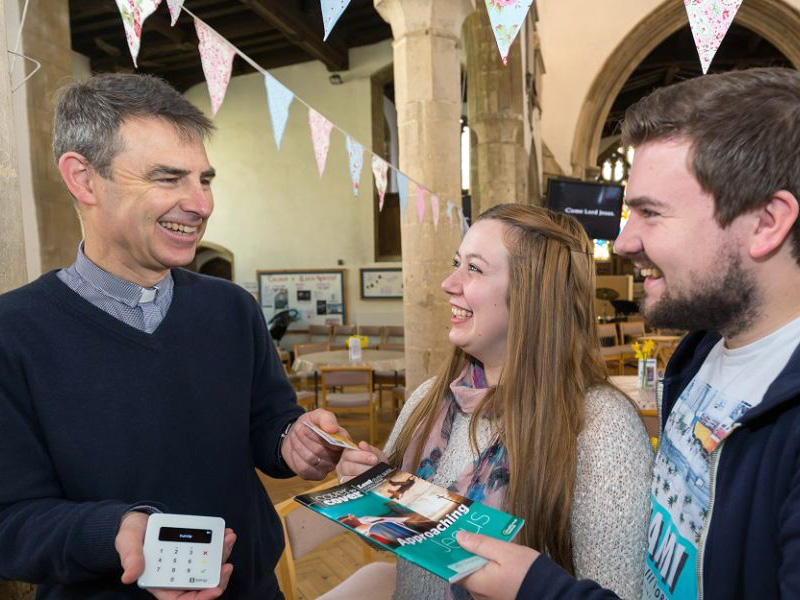 LONDON (RNS) — Like the widow offering small coins at the Temple in Luke’s Gospel, Christians have long been encouraged to not only pray but also make a financial contribution at their place of worship.

The Church of England has now decided to make their financial transactions easier. Instead of expecting people to rummage for a few coins or bills, it plans to introduce cashless, contactless payments in its 16,000 churches and cathedrals.

The payment machines will first be used for funeral fees, wedding notices or even to buy a coffee after the service. Later, people will also be able to make their weekly offering with the machines.

After a trial carried out in 40 Anglican churches since last year, the contactless plan will be used in all dioceses. The idea took root because declining numbers of people use cash nowadays.

“There is a clear need for our parishes to introduce card and contactless facilities and we are excited to make this available,” said John Preston, the Church of England’s national stewardship officer.

“How we pay for things is changing fast, especially for younger churchgoers who no longer carry cash, and we want all generations to be able to make the most of their place of worship.

“Installing this technology does mean that one-off fees can be done via card, as can making one-off donations.“

Contactless payment, also known as “tap-and-go,” is barely known in America, but its speed and convenience has made the technology very popular across Europe, where it has been widely adopted.

One British church keen to embrace the new technology is Holy Nativity in Mixenden, on the outskirts of Halifax in West Yorkshire. Its vicar, the Rev. Robb Sutherland, who already has a terminal, said:

“The world has changed. When I was a student and going to church in Newcastle, I commented to my now wife that I didn’t have any cash and the church needed a card machine. That’s 20 years ago. Now in 2018, I just bought my lunch using my watch for contactless. It is important that we’re able to enable people to do their giving in whatever way feels best for them.

“It was so easy to set up, literally took me three minutes and even someone with no technical knowledge could have it up and running in 10 minutes.”

Holy Nativity has a Rock Mass on the third Sunday every month, complete with a live rock band, smoke and lights, processions and incense.

“I can see that congregation being really up for trying something new,” Sutherland said. “The Rock Mass does tend to have a lot of people who only come to church for that service because it has its own distinctive community. I guess that is the nature of a fresh expression of church.”

Now he is working out ways of making contactless payment always available at the back of the church for special events such as baptisms and other large services.

A special reader that can be passed around for the collection during church services will be tested out soon in the Church of England.

Although some churches will welcome it, others think it is not for them because the amount of cash they take in is so small that buying the contactless system and running it will not be worthwhile.

The Church of England receives around 580 million pounds ($820 million) in donations each year, mostly through regular contributions.

The Rev. Matthew Cashmore, based at All Saints Church in Hereford near the border with Wales, said: “We decided not to do it because of the cost and most of our collection comes through standing orders.”

Others say it will help with another problem for rural churches: the growing shortage of banks.

Simon Sarmiento, who runs the Thinking Anglicans website, said the problem was usually not the volume of cash a church has to handle, but the logistics of dealing with it in town centers with limited parking.

“It’s the continual closure of bank branches in smaller towns, so that there’s a longer distance to go to make the actual cash deposits into a bank,” he said. “Who wants to have to carry cash — and I’m talking in part about metal money — three miles to a place where you can’t park outside the door?”