They turn onto a gravel road 10 miles east of Waco and pass through a black gate leading to a rural complex where David Koresh — leader of an apocalyptic religious sect known as the Branch Davidians — and 75 followers perished in a firestorm on April 19, 1993. That came after six Branch Davidians and four federal agents earlier died amid a flurry of gunfire in the government’s initial Feb. 28, 1993, raid on the 77-acre Mount Carmel property.

RELATED: Forged in Waco’s fires: The FBI and religion scholars reflect on their 25-year relationship

“I was just really curious about seeing this memorial and seeing what’s out here,” said Eric Williams, a Seattle film producer who made it a point to visit the site during a leisure trip to Texas.

Nearby, a woman snapped a picture of a monument listing the names of Koresh and the other 81 Branch Davidians — including 18 children ages 10 or younger — who lost their lives in the 51-day federal standoff that ended in a nationally televised inferno.

Twenty-five years after the siege, interest in what happened outside Waco — and who’s to blame — remains immense.

Evidence of that can be seen in the spate of recent television specials coinciding with the anniversary — from ABC’s “Truth and Lies: Waco” to the Paramount Network’s six-part miniseries “Waco” to the Smithsonian Channel’s documentary “Waco: The Longest Siege.”

The Waco Tribune-Herald, the local newspaper that launched a seven-part investigative series on “The Sinful Messiah” the day before the Feb. 28, 1993, raid, has published the articles online for the first time.

“I think people would like for it to go away, but I don’t think it has,” said Bill Pitts, a longtime religion professor at Baylor University in Waco.

He said that just a few weeks ago, when he took a group of church history students to England, he stepped into a cab and “the taxicab driver asked us where we were from, and so we told him.

“And he said, ‘Oh, I remember that,’ and he went on with the story” of the Waco tragedy, Pitts said.

Other longtime residents say the popularity of Waco-based home-improvement experts Chip and Joanna Gaines of “Fixer Upper” fame has given this Central Texas city of 130,000 — halfway between Dallas and Austin — a more positive image.

“It’s definitely faded,” Chelsa Brindley Ressetar, director of advancement for a college-prep school in Waco, said of her hometown’s association with the Branch Davidians.

“I don’t think you can brand a city based on an event that happened outside the town. I don’t think that was fair,” added Ressetar, who was a teen working as a store clerk when she first heard Blackhawk helicopters headed to the Mount Carmel complex.

Some dubbed Koresh the “wacko from Waco,” a term the Rev. George Johnson remembers hearing when he’d travel out of town after the siege.

“At some point, people realized how silly that was,” said Johnson, who served 25 years as senior pastor of Waco’s St. Paul African Methodist Episcopal Church and is now the presiding elder for the denomination’s district that includes Central Texas.

Still, many out-of-towners flock to the Branch Davidian site.

On a recent weekend, pastor Charles Pace said he counted 100 cars that came through the gate.

A sign near the entrance requests $5 donations from each car to maintain the property, of which Pace serves as trustee.

“They (the visitors) need closure because they can’t believe what the government did, but they also can’t believe that David Koresh claimed to be God,” said Pace, a Branch Davidian who greets visitors at a small church on the Mount Carmel site and teaches that the fire was God’s judgment on Koresh’s “apostate leadership.”

Pace said he confronted Koresh about his “blasphemous claims” in 1984.

But Koresh refused to repent of his teachings, said Pace, who was leading a small house church in Gadsden, Ala., at the time of the 1993 standoff.

Pace said he returned to the Mount Carmel site in 1997 and later renamed the church “The Branch, The Lord Our Righteousness” after what he describes as “the purification that took place.” He said he lives on the property with his wife, daughter, son-in-law and youngest son.

Asked how many people attend the church constructed years after the fire, Pace replied: “I don’t have a number because it’s basically a cyber-church. I put studies online, and people will look at them. Some will write me and ask questions, and I will give them answers or make another study. I don’t know what the number is. That’s all up to the Holy Ghost.” 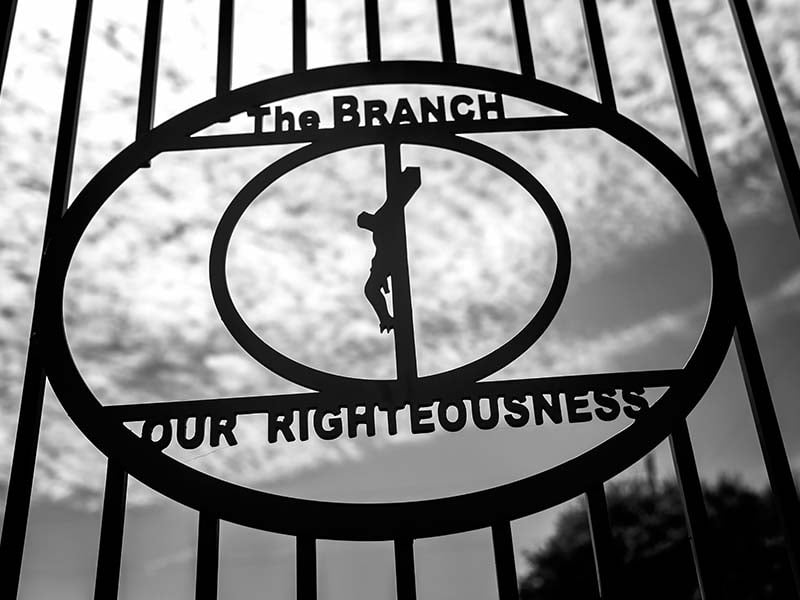 Detail from the entrance gate at the Mount Carmel Center (Branch Davidian compound), outside of Waco, Texas | Photo by Lorie Shaull/Creative Commons

The few Branch Davidians who survived the fire and still live in the Waco area — including Clive Doyle and Sheila Martin — do not associate with Pace.

Texas Monthly recently reported that those survivors even now believe that Koresh “was not a crazed cult leader, or a delusional narcissist, or even merely a gifted interpreter of scripture, but a genuine prophet of God.”

Religious scholars, however, make a distinction between Koresh’s followers seeing him as a messianic figure in the end times and believing he was the actual Messiah (as in Jesus).

Who started the fire?

As noted in the book “Why Waco?: Cults and the Battle for Religious Freedom in America” by James D. Tabor and Eugene V. Gallagher, federal officials spent months planning the Feb. 28, 1993, raid on the Branch Davidian complex.

At the time of the raid, 123 people — including 43 children — were inside the multistory building where Koresh lived with followers, including multiple wives and children he was accused of physically and sexually abusing.

The concerns of the Bureau of Alcohol, Tobacco, Firearms and Explosives, known as ATF, were based on allegations that the sect — an offshoot of a group that broke away from the Seventh-day Adventist Church — possessed illegal firearms materials and was possibly converting AR-15 semiautomatic rifles into machine guns.

Shortly after 9 a.m. that Sunday, an 80-vehicle convoy — including two cattle trailers pulled by trucks and loaded with 76 heavily armed agents — raced up to the property and halted in front as agents stormed the center, Tabor and Gallagher wrote. Overhead, two Blackhawk helicopters arrived almost simultaneously.

FBI agents called to Mount Carmel after the failed raid “can hardly be expected to have packed their Bibles,” the “Why Waco?” authors suggested in the 1995 book’s opening. “In retrospect, it would not have been such a bad idea.”

More than two decades later, Tabor — a religion professor at the University of North Carolina at Charlotte — said he remains “completely uncertain” about who started the fire that claimed so many lives. On the morning of April 19, 1993, federal agents used tanks to inject tear gas into the Branch Davidian building in an effort to force Koresh and his remaining followers to surrender. But at about noon, fire broke out in multiple locations in the building. Agents alleged that the sect had started the blaze, while survivors blamed the government for igniting the inferno.

Regardless of the fire’s cause, Tabor faults the FBI’s tactical experts for failing, in his view, to understand Koresh’s apocalyptic theology, based on the Book of Revelation texts about the Seven Seals and “the Lamb,” a mysterious figure with seven horns and seven eyes who would open those seals in the Last Days.

“The FBI delivered to David the apocalypse that he expected to come in Israel in 1995,” Tabor told Religion News Service — a statement the professor first made in a 1995 congregational hearing on what went wrong in Waco.

“I don’t believe anything David taught, OK?” Tabor added. “But it’s important to understand what he taught. And the plan was very simple. They believed that God would gather 144,000 people before the end. They would be armed and trained to go to Israel, and they would fight side by side with the Israelis in the Battle of Armageddon. That was their crazy idea.”

But the FBI refused to view the Branch Davidians as sincere believers convinced through deep Bible study that Koresh was a final prophet, Tabor said.

Instead, agents portrayed the sect’s members as “brainwashed victims” and characterized Koresh as a cult leader, the professor said.

“I don’t think anybody understood their theology,” responded Bob Ricks, who served as the FBI’s main media spokesman throughout the standoff. “We tried to get as many experts as we possibly could.”

Ricks, now director of the Oklahoma State Bureau of Investigation, bristles at conspiracy theories tying the FBI to the siege’s deadly end. 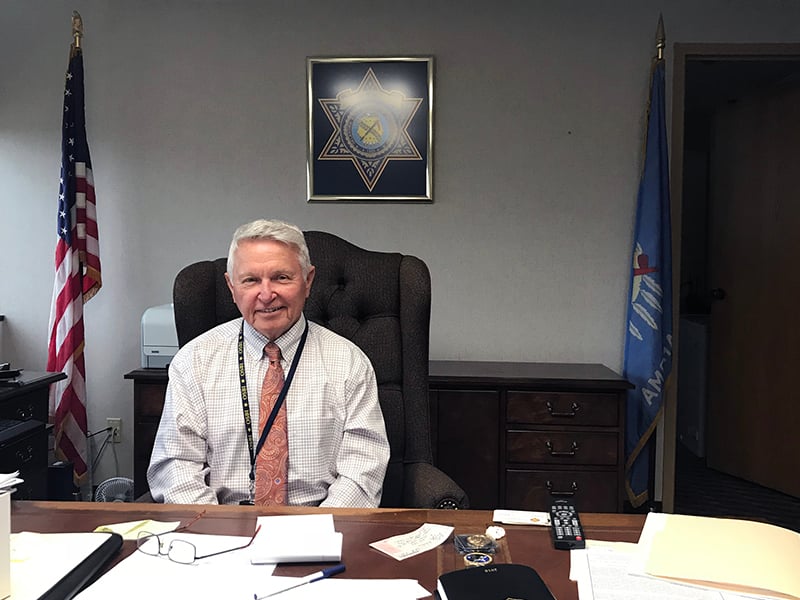 Bob Ricks, who was the face of the FBI during the 1993 Waco siege, reflects on the 25th anniversary in an interview at his Oklahoma State Bureau of Investigation office in Oklahoma City. RNS photo by Bobby Ross Jr.

“The FBI never fired a shot the last day. We did not start any fires,” Ricks said at his Oklahoma City office. “There have been multiple independent investigations, and they know that we did not do that. If you believed your government was that vile and corrupt — I mean, how could you even support a government of that nature?”

“I don’t think he was a madman,” the law enforcement official said of Koresh. “I think probably the best description of him is a master manipulator. I don’t believe he suffered from a true psychosis that some people tried to ascribe.

“Did he believe he was Christ?” Ricks added. “I think it was to his benefit to believe that and that he was able to get his people to follow him by believing that. … All the power, prestige, special benefits that he got by being the so-called Sinful Messiah would dissipate if he were not.”

Baylor professor Pitts, who was familiar with the Branch Davidians before the raid, said questions remain about whether the ATF — while seeking a budget renewal — saw the sect as a nice target “for a decisive kind of show.”

“If that’s the case, then that was not a good thing,” Pitts said at his Baylor office, stacked wall to wall with books.

“But the Branch Davidians also have problems of legitimacy from the standpoint of the ordinary public, especially with Koresh taking the wives of his members and having sex with them and saying that he was siring the 24 elders who are going to be the judges in heaven,” the professor added.

“So there again, did he really believe that? Or was he using that as a ruse for his own self-gratification?”