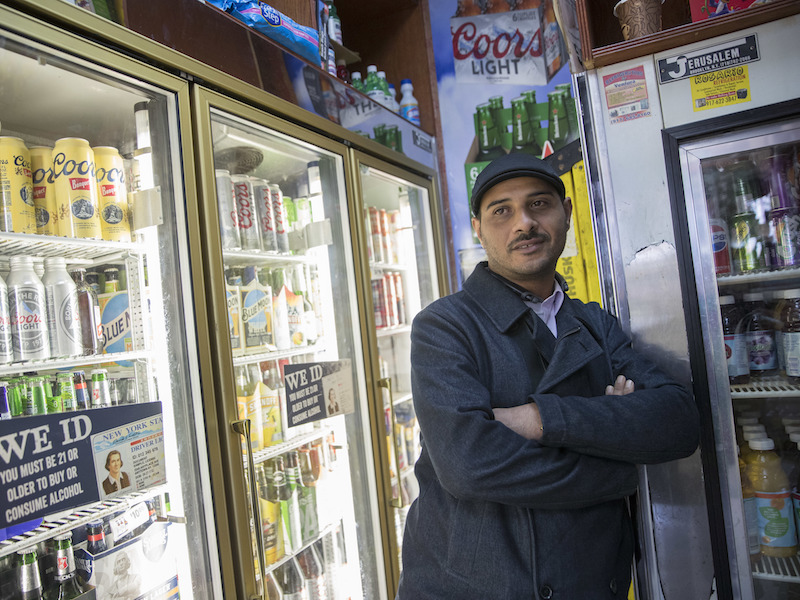 In this April 5, 2018 photo, Radad Alborati, a Yemeni-American, speaks during an interview with The Associated Press in New York. Alborati's wife is stuck in war-torn Yemen after his years-long effort to bring her to the U.S. ended last month, when a U.S. consulate said she was ineligible for a waiver from President Donald Trump’s restrictions on immigration and travel from certain countries. (AP Photo/Mary Altaffer)
April 21, 2018
Jack Jenkins

NEW YORK (AP) — At the New York City convenience store where he works the overnight shift, Radad Alborati takes a sip of coffee and surveys his life.

His wife is stuck in war-torn Yemen after his yearslong effort to bring her to the U.S. ended last month with a few phrases on a letter from an embassy.

“Ineligible for a visa” due to President Donald Trump’s restrictions on immigration and travel from certain countries. “A waiver will not be granted.”

As the U.S. Supreme Court prepares to hear arguments next week on Trump’s travel ban, its effects are playing out for Alborati and others from Manhattan to Minnesota to the Middle East. Whatever the outcome of the legal debate between an administration that says the policy is a national security necessity and challengers who say it’s discriminatory, it is already shaping lives and plans.

Alborati got visas for his and his wife’s three sons last fall, while the travel ban was temporarily blocked by a court. He was relieved to be able to bring the boys, ages 10 through 16, to New York. But they’re not living with him or one another. They’re bunking with three separate sets of family friends because he doesn’t want to leave them home alone during his midnight-to-noon workdays.

As the U.S. Supreme Court prepares to weigh President Donald Trump’s ban on travel from certain countries, a New York convenience store worker worries for his wife in war-torn Yemen after she was deemed ineligible for a waiver. (April 20)

The savings he had hoped to put toward buying the family a house in New Jersey are gone. They were swallowed by costs of getting the family to visa interviews in Djibouti — the U.S. embassy in Yemen closed because of the war — and staying there during a five-month wait for his wife’s denial, he said.

“I never felt like that’s the America I was dreaming about,” says Alborati, 38, who followed an older brother to the U.S. at 15 and became a citizen in 2010.

He applied two years later to bring his wife, whom he has known since childhood, and the family they built during his visits to Yemen.

“I get that you want to make the country safer — not that way,” he says. “Separating families, that’s sick.”

With the visa denial, Alborati went back to New York to provide for the children. His wife, 33, returned to a country where three years of fighting between rebels and a Saudi-led coalition, backing an internationally recognized government, have killed over 10,000 people.

On twice-daily phone calls, he hears the fear in her voice. He worries, tries to keep his sons’ spirits up and hopes the Supreme Court will give his family another chance to be together.

“This is my real life. That’s what I’m fighting for,” Alborati says, holding a photo of him and his sons. “This country is built on family. And this is my family.”

Trump was clear about the ban’s goal when he issued its first version: to “keep radical Islamic terrorists out.”

“We only want to admit those into our country who will support our country and love deeply our people,” the Republican president added as he signed the order days after his January 2017 inauguration.

The initial ban was temporary and evolved, amid court challenges, into the prohibition that is now in place at least until the Supreme Court rules.

The measure bars various categories of travelers and immigrants from Iran, Libya, North Korea, Somalia, Syria and Yemen, plus some Venezuelan officials.

The State Department, which won’t discuss any individual cases, says the policy aims to encourage foreign governments to share information and protect the U.S. until they do. Chad was taken off the list this month.

“The restrictions imposed by the president were carefully considered,” the department said in a statement this month to The Associated Press.

However much consideration was given, families and others separated by the ban are struggling, in places near and far.

Fresh from finishing his master’s degree in filmmaking in San Francisco, Payam Jafari wanted to celebrate his accomplishment and his 26th birthday last August with his family back home in Iran. But he didn’t make the trip.

His student visa allowed him to come and go. But Jafari remembered how the initial ban, which for a time barred even people with prior permission to come to the U.S., came suddenly while he was in Iran for winter break in January 2017 and almost derailed his return for his final semester at the Academy of Art University in San Francisco.

Since then, he has felt like he can’t take a chance on going home, lest the rules abruptly change again.

“I cannot risk it, although I want to see my family so bad,” he says. “I’m in the middle of my project I spent five years of my life on.”

As Jafari raises funds to make his first feature film, he and his relatives in Tehran aren’t sure when they’ll see one another next. Their uncertainty about U.S. travel policy weighs on his mom, Mehrnoosh: “Waiting for what will happen in the end — this is very difficult for a mother,” she said by email.

Adds his sister, Parastoo, “Politics treats everyone in the world’s lives like toys. We all get burned in the end by it.”

The travel ban debate has been stoked by Trump’s campaign-trail call for a “total and complete shutdown of Muslims entering the United States.”

While the ban now cites concerns about security screening, not religion, its impact falls mainly on Muslim-majority countries. Challengers, led by the state of Hawaii, say it amounts to illegal religious and nationality-based discrimination.

But James Carafano, a national security expert at the conservative Heritage Foundation and a Trump transition team member, says the policy was driven by concerns about visa vetting and the possibility that Islamic State fighters could stream out of the militants’ shrinking territory and aim for the U.S.

The video projected in a Cincinnati theater showed three Syrian dancers in a piece inspired by the lives of their fellow citizens amid the civil war that has ravaged their homeland. But onstage, only two dancers performed the piece in its U.S. premiere on a January night.

The third hadn’t been allowed into the country.

A week earlier, it wasn’t clear the show would go on at all. The Contemporary Arts Center in Cincinnati and New York-based immigration lawyer Matthew Covey were scrambling to seek a travel ban waiver for Syrian choreographer Mithkal Alzghair and two fellow dancers to perform his “Displacement.”

The ban allows for case-by-case waivers, and they have been relatively scarce. Over 8,400 people sought to travel from the listed countries in the first month after the latest version took effect Dec. 8, according to the State Department. About 450 have been granted since then, according to a letter that Democratic Sens. Chris Van Hollen, Chris Murphy and Richard Blumenthal sent Thursday to administration officials. The letter, obtained by the AP, seeks more information about the waiver process.

The arts center’s Drew Klein recalls word came with just six days to go: The Paris-based Alzghair could come, with only one of the other dancers.

Watching from the audience, artist Kate Kern noticed the third dancer in the video and later learned why he wasn’t there. “It really brought home the effects of the travel ban,” she says.

Alzghair didn’t respond to interview requests. To Covey and Klein, the performances stand as a reason to keep trying to bring in artists from countries affected by the ban when many presenters are wary.

“People, on a human level, still want to be connected and hear each other’s stories,” Klein says.

When Abdisalan Mohamed Jele brought his two young sons from Kenya to Minnesota, he thought his wife and new baby girl would follow two weeks later.

Jele and his wife, Nimo Abdi Hassan, are from Somalia, which has been ravaged by civil war for a quarter-century. He came to the U.S. in 2007, became a citizen five years later and rejoiced when she was issued a visa shortly after giving birth last year. But the visa expired before she could get the newborn a passport. The couple figured a new visa would be issued quickly.

Instead, the family has been waiting six months, with no reunion in sight. A March 8 email from the U.S. Embassy in Nairobi, where Hassan lives, says the travel ban makes her ineligible for a visa, but consular officials are reviewing the possibility of a waiver.

Their sons, 7 and 4, sometimes ask when their mother is coming. Jele tries to reassure them: “Soon. Soon.”

“It’s so hard,” he says, wiping tears from his cheeks. “I’m American. I don’t know why my family can’t come here.”

Jele’s attorney, Laura Tripiciano, says Hassan, 32, easily qualifies for a waiver. But there’s no timeline for a decision, and Jele, 31, isn’t sure how much longer he can wait. He’s supporting Hassan in Kenya while paying for a St. Cloud, Minnesota, apartment big enough for a family of five.

On a typical day, Jele drops his elder son at the school bus and the younger one with the boys’ aunt, then goes to school himself to learn English and earn his GED. After taking the older boy from school to the aunt’s, Jele works from 3:30 p.m. to midnight at a life jacket factory. Finally, he takes the sleeping boys home.

Some days, he has no time to eat. Once, he was so frazzled he forgot his work badge, safety glasses and shoes. He appreciates his sister’s help with child care, but it’s becoming too much to ask.

If his wife doesn’t get a visa soon, Jele thinks he might have to send their boys — who are U.S. citizens — back to Kenya or quit his job to care for them. He said he understands security concerns but believes Hassan is being singled out because she’s Somali.

“I love this country because we have a lot of opportunity, education, health, peace,” Jele says. “I live here. I want to live here. But if my wife, she lives in Nairobi ... sometimes, I’m thinking I move back to Africa.”