This group has a looser interpretation of the transcendent. Some call it God; others don’t.

The survey of 4,729 respondents conducted online in December offers some insight into the diversity of U.S. beliefs. And like other surveys over the past decade, it suggests the number of Americans who believe in God is slowly declining.

“One of the key questions that motivated the study was to get more detail among those who say they don’t believe in God,” said Gregory Smith, associate director of research at Pew. “Among those people who say ‘no’ in a straightforward way when asked, ‘Do you believe in God?’ what are they rejecting? Are they rejecting belief in God or a higher power altogether?”

In the survey, those who answered that they do not believe in God were asked a follow-up question, whether they believed in “some other higher power or spiritual force in the universe.”

To be sure, a majority, if a slim one — 56 percent — say they believe in the conventional all-loving, all-knowing, all-powerful God of the Bible.

Then there are the hardcore disbelievers: about 10 percent who say they don’t believe in the God of the Bible or a higher power. 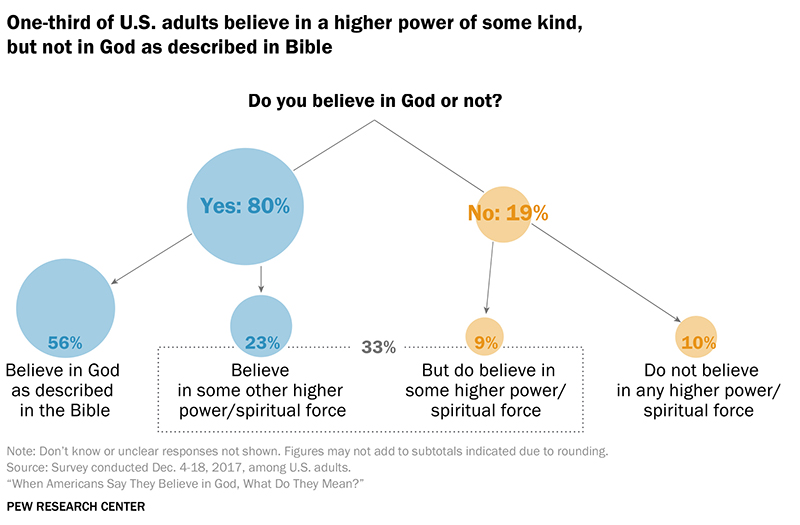 One-third of U.S. adults believe in a higher power of some kind, but not in God as described in Bible. Graphic courtesy of Pew Research Center

But among the so-called “nones” — a broad category of atheists, agnostics and those who answer “none of the above” on questions about religion — fully 72 percent believe in a higher power of some kind.

Two previous Pew surveys found that belief in God generally is falling. A 2007 Pew survey tabulated belief in God at 92 percent; by 2014 it was 89 percent. This most recent poll, though methodologically different —  it was an online poll as opposed to a telephone poll — put the number at 80 percent.

Belief in God as described in the Bible is highest among Christians — 80 percent, the survey found. Evangelicals and black Protestants had the highest rates of belief in a God of the Bible — 91 and 92 percent respectively. That number falls to 72 percent among mainline Protestants and 69 percent among Catholics. Only one-third of Jews, by contrast, believe in the God of the Bible. (The survey did not include enough respondents who were Muslim or members of other faiths to be included.)

The survey also showed that:

“The Ancient of Days” by William Blake. Image courtesy of Creative Commons

Just why so many agnostics, and even atheists, believe in a higher power is a matter of debate.

Ryan Cragun, a sociologist at the University of Tampa who studies the nonreligious, said some people may say they believe in a higher power to avoid the social stigma and even discrimination atheists face.

“To what extent are they saying that to avoid prejudice is an interesting question,” Cragun said. He pointed to studies suggesting that white heterosexual men are the most likely to say they’re atheist because they have a certain social privilege that others don’t, and therefore may feel less at risk in making such a statement.

Others say the category of belief with its binary options — yes or no — can’t fully account for the diversity of human experience. Transcendence, for example, can be a supernatural experience but also a natural one, said Elizabeth Drescher, a professor of religious studies at Santa Clara University and the author of “Choosing Our Religion: The Spiritual Lives of America’s Nones.”

Some people may have faith in life’s animating force or in the human spirit, she said.

“There are lots of people who experience things in their lives that feel mysterious or unexplainable or awe-inspiring and who might logically identify as nonreligious or nonbelieving, but who nonetheless have a sense that we don’t know everything,” Drescher said. “The reality of people’s experience is much more complex and nuanced.”

The margin of sampling error for the full sample of 4,729 respondents was plus or minus 2.3 percentage points.