(RNS) — Since as far back as 2012, Liberty University has touted itself as the “world’s largest Christian university.” The claim has been repeated by journalists and prominent figures, such as Liberty President Jerry Falwell Jr. during his 2016 speech before the Republican National Convention and President Donald Trump during his May 2017 commencement speech at the Lynchburg, Va., evangelical Christian school.

That line has since been removed, and no longer appears on Liberty press releases.

Following an inquiry from Religion News Service this week, school officials said it will erase similar references on possibly “hundreds” of pages across the school’s website, such as one that still appeared as of Thursday (April 26) on a page promoting its booming online degree program; that page was also changed by mid-afternoon the following day.

Liberty officials are downplaying the loss of the distinction they can no longer tout.

“We are focusing more on quality than the sheer size of our university,” said Len Stevens, executive director of external communications for the school.

Where the loss of the mantle of “largest” in its category might go unnoticed for other universities, it may cause more of a stir for Liberty. The university has been one of the highest-profile institutions of higher education in the world for more than a year because of the close connection between Trump and Falwell, a member of the president’s informal evangelical advisory committee. Falwell stands accused by many within and beyond evangelicalism for providing cover for Trump’s most offending behavior.

And what is now the largest Christian university? According to federal enrollment data Liberty also cites, that title in the U.S. — and perhaps the world — belongs to Grand Canyon University, a for-profit Christian school in Phoenix. Like Liberty, it has benefited from heavy investment in online education.

But it also differs from Liberty in several ways, especially in its approach to religion and politics.

A spokesperson for Liberty initially said the school enrolls “about 110,000 students,” including “more than 15,000” who take classes on campus, a datapoint based on a more precise number the school provides to the Integrated Postsecondary Education Data System database. The database is a project of the U.S. Department of Education that publishes school enrollment information as part of the National Center for Education Statistics.

A second Liberty official later claimed the number is “more than 100,000 students,” and pointed to the latest iteration of the data — from the 2015-2016 IPEDS  — which reported Liberty’s “12-month unduplicated headcount” enrollment (meaning every student should be only counted once) to be 109,921.

The same database release puts Liberty’s enrollment at more than a thousand students less than GCU’s, which is listed as having an enrollment for that same time period of 111,211. 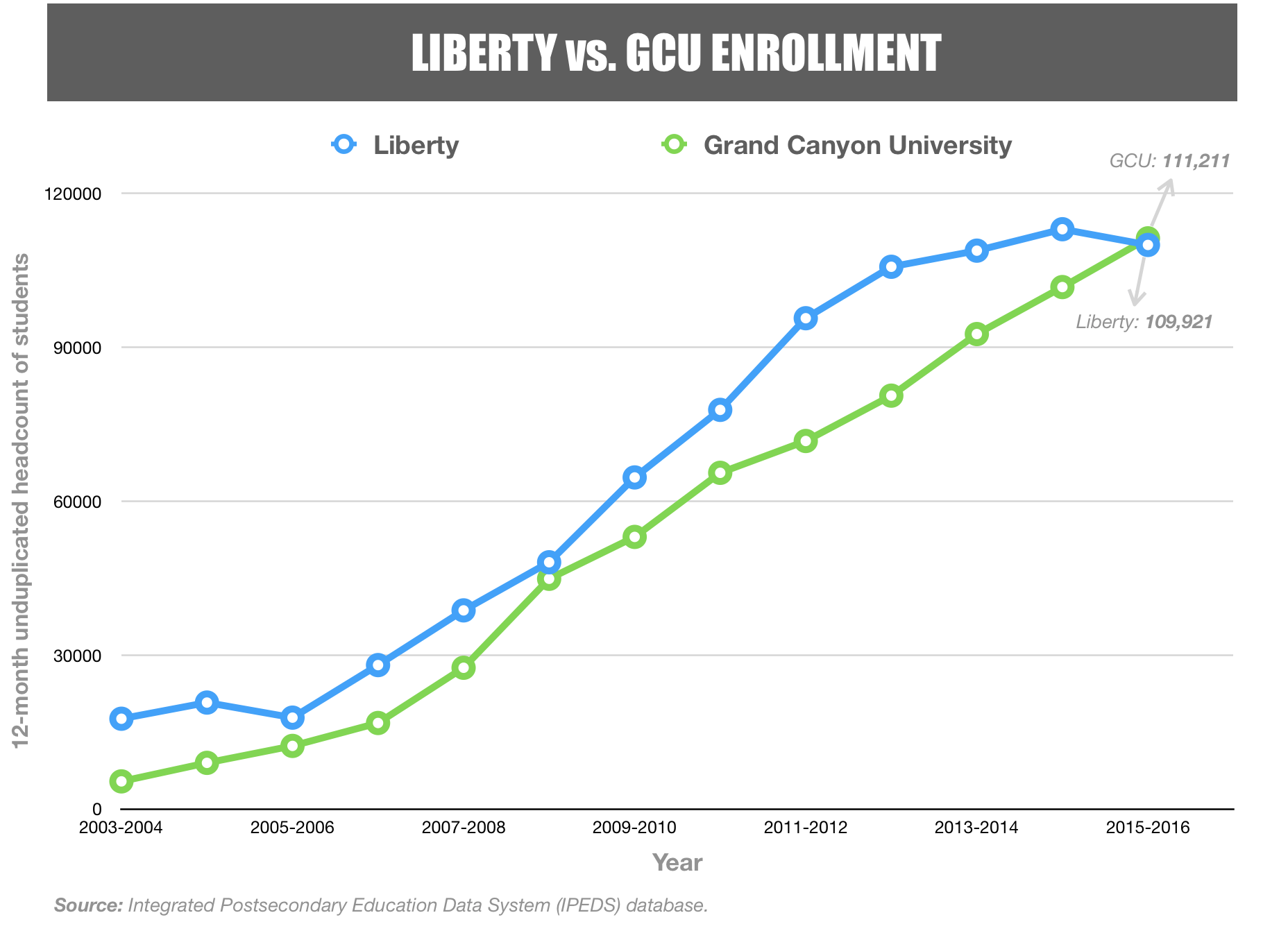 According to Tom Snyder, a spokesman for the National Center for Education Statistics, the 2015-2016 IPEDS numbers are technically “provisional” and may be subject to further editing. But he noted the data is reported by the institutions themselves.

Liberty declined to provide the 2016-2017 12-month unduplicated headcount it submitted to IPEDS. But Stevens acknowledged in an email to RNS that it no longer holds the top spot among Christian schools, and had been “supplanted” by GCU.

“Anything that we can do to promote or help other Christian universities grow — that’s the most important thing to us,” he said. “That’s a lot more important than us being the largest. … We think the world of Liberty and we’re glad they’re the size they are and we hope they continue to experience prosperity.”

RNS reached out to both schools with questions for leadership, but only GCU provided answers from anyone other than a spokesperson.

Although Liberty and GCU may be kindred spirits in some ways, they differ in others. For example, Liberty requires students to attend “convocations” that usually include a worship element but GCU does not — although Mueller said between 5,000 to 7,000 students attend Monday morning chapel voluntarily.

“We’re a university, not a church,” Mueller said.

And while Jerry Falwell is well known for taking public stances in support of Trump, Mueller says his school prefers a more bipartisan approach. He noted that GCU has a “significant number” of undocumented students who benefit from the Deferred Action for Childhood Arrivals program, and that the school is “about immigration reform.”

Falwell has been largely silent regarding the DACA program, which Trump rescinded last year and is currently in legal limbo.

A shared shift to online education

The numerical changing of the guard between the schools, both of which are among the largest in the country, reflects their mutual embrace of online education — a practice some see as an extension of their Christian mission, as well as a way of addressing financial troubles.

Liberty’s use of web-based learning has garnered significant media attention, and ramped up after Falwell took control of the school following the death of his father, Jerry Falwell Sr., in 2007. According to Inside Higher Ed, the school was struggling with debt issues at the time, but Liberty’s online program began to flourish under the younger Falwell’s leadership. The investment in online learning paid off, and contributed to an increase in the university’s net assets from about $150 million in 2007 to more than $1.8 billion in 2016.

GCU’s Mueller says his college’s story is similar. It was mired in debt in 2004, but it hired him in 2008 shortly after declaring itself a publicly traded company. He had just finished 22 years with the University of Phoenix — another for-profit school and a titan of the online education industry — and quickly expanded GCU’s online program, focusing on outreach to working adults.

When asked if he saw this growth as a part of GCU’s mission as a Christian school, Mueller said yes.

“We are a Christian university that has tentacles that stretch to 90,000 students,” referencing another enrollment number the school cites that is not the IPEDS number.

He argued their online program helps bolster the on-campus students (and vice versa), which the university expects to climb to 20,000 by fall 2018. Meanwhile, GCU has begun the process of becoming a nonprofit university again, with plans to spin off its online apparatus as an independent for-profit company that would manage the school’s web-based education.

Web-based learning has expanded to seminary education as well. One of the largest seminaries in the country — Fuller Theological Seminary in Pasadena, Calif., — has made extensive use of online tutelage since the 1990s, and recently ramped up its online programs.

“Our student population has shifted significantly online,” said Kevin Osborn, associate provost for enrollment management and vocation formation at the evangelical Christian seminary. “Even those who would consider themselves a Pasadena student (on campus) … the majority are taking at least one online course a year.”

Liberty officials did not respond to questions about whether they see investment in web-based education as part of their Christian mission, but a spokesperson for the school noted that he is not aware of any plans to permanently “cap” online enrollment. He added that administrators want to keep the on-campus student population “under 16,000.”

Richard DeMillo, executive director of the Center for 21st Century Universities at Georgia Tech, said the shift to online for religious schools is “a natural strategic direction for them to go.” He outlined a scenario in which high-quality online coursework would allow a university to spend more resources on classes that reflect their unique mission, such as religious education.

“I’m a little surprised there haven’t been more,” he said.

Online education has encountered intense scrutiny in recent years, however. A recent New York Times Magazine/ProPublica investigation reported that Liberty’s web-based learning program has been criticized by former students and professors who say it can leave students “to flounder” and resulted in a “drop-off” in academic quality.

Di Xu, an assistant professor at School of Education at the University of California, Irvine who has published studies on online education, said she has seen a general performance gap between online coursework and face-to-face education in her research. Pointing to her experience researching distance learning at community colleges, she said that while web-based classes can produce results in many instances, it can be challenging for students who may not be as well prepared as others to thrive in school.