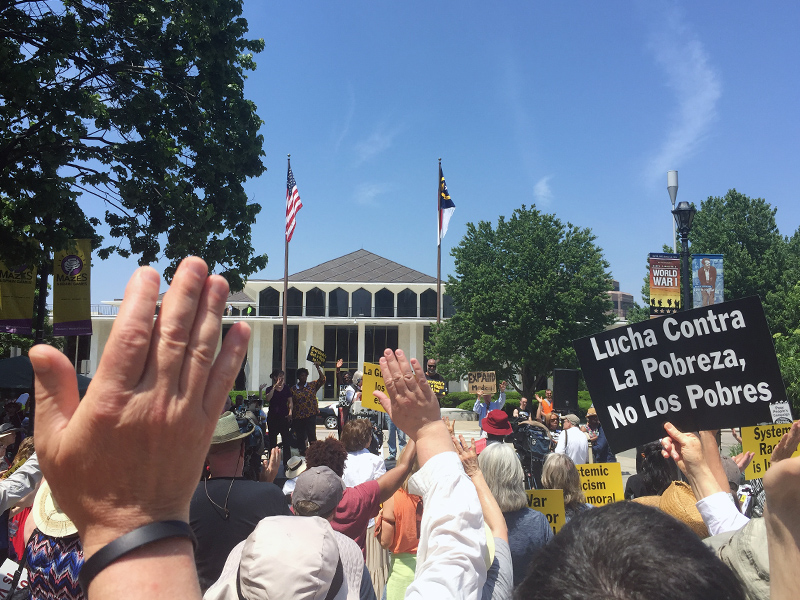 People participate in a Poor People’s Campaign event in Raleigh, N.C., on May 14, 2018 in front of the state legislature building. Coordinated events took occurred at many state capitols across the country. RNS photo by Yonat Shimron
May 14, 2018
Yonat Shimron

Whereas that campaign foundered after King’s assassination in 1968, the relaunch Monday (May 14) outside some 35 statehouses across the nation was intended to draw attention to the ways the government has neglected its moral obligation to the country’s poor.

In Raleigh, a group of more than 200 activists, led by the Rev. Nancy Petty of Pullen Memorial Baptist Church, the city’s preeminent social justice church, made a list of demands. They pushed for a repeal of the tax law passed last year that primarily benefits the wealthy as well as a raft of other issues, including equal pay for women, paid maternity leave, an end to job discrimination against LGBTQ people and better access to quality education for poor children.

“Somebody is hurting our people, and it’s gone on far too long,” was the refrain shouted by a dozen speakers. Those speakers Monday focused on four groups: women, children, LGBTQ people and disabled people.

“We want to build sufficient power to bend the moral arc of this nation out of this poverty rut into the land of plenty,” said the Rev. Nelson Johnson of Greensboro. “We are the huddled masses and we are still yearning to be free.”

At the conclusion of the hourlong protest, some 50 people linked hands in the middle of Jones Street singing “We shall not be moved.” Most were cited by police for impeding traffic by standing in the street.

In North Carolina, this is a familiar rite.

Beginning in 2013, the Moral Monday movement, led by the Rev. William J. Barber II, forged the blueprint for weekly demonstrations followed by civil disobedience. Those protests were intended to oppose the Republican-dominated legislature’s agenda, its  cuts in unemployment benefits, opposition to expanding Medicaid, and restrictive voting rights laws. The Moral Monday movement is credited, in part, with helping defeat Republican Gov. Pat McCrory, who was succeeded by Democratic Gov. Roy Cooper in the 2016 election.

This time, Barber has teamed up with the Rev. Liz Theoharis, a Presbyterian minister and co-director of the Kairos Center for Religions, Rights, and Social Justice at Union Theological Seminary in New York, to take the protests national. 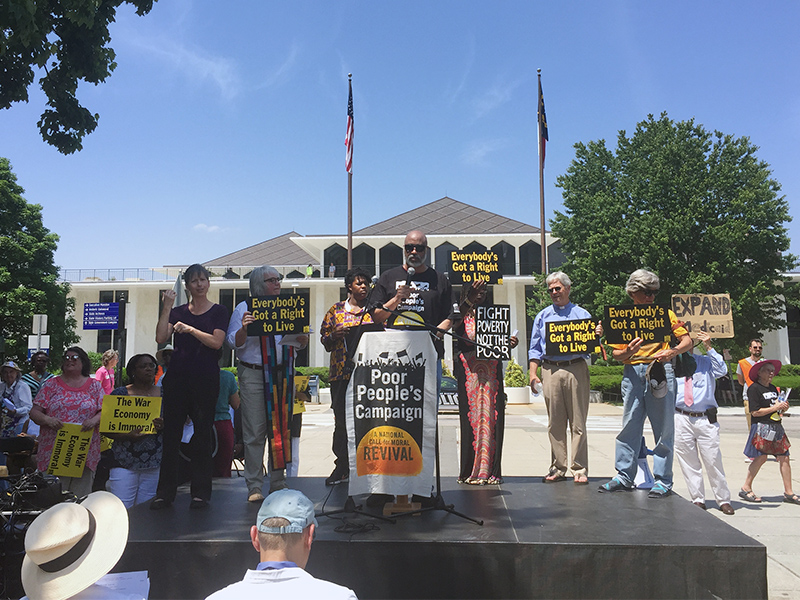 Derick Smith, a political education coordinator for the Poor People’s Campaign, speaks to the crowd in Raleigh, N.C., on May 14, 2018 in front of the state legislature building. Coordinated events occurred at many state capitols across the country. RNS photo by Yonat Shimron

On Monday, Barber, the former president of the state’s NAACP chapter and the pastor of Greenleaf Christian Church in Goldsboro, was not in Raleigh, but in Washington, D.C., leading a similar protest in front of Congress. Barber and Theoharis were taken into custody outside the U.S. Capitol.

The campaign is intended to create a network of people and organizations willing to nonviolently confront government and its policies regarding the poor. Over the next 40 days, in cities across the nation protesters will conduct teach-ins, knock on tens of thousands of doors to mobilize voters, and conduct other forms of civil disobedience.

At issue are several policies they believe are heartless, if not cruel, to poor people. They want to see a massive overhaul of the nation’s voting rights laws, new programs to lift up Americans living in poverty, immediate attention to ecological devastation and measures to curb militarism and the war economy.

Barber and Theoharis take their inspiration from the biblical prophets who admonished leaders for policies that harmed the poor at the expense of the wealthy. The 40-day duration echoes a typical biblical period of preparation, such as Jesus' 40 days of fasting in the desert before his ministry began.

The alliance formed by Barber and Theoharis is made up of Christians, Jews, Muslims, nonbelievers, and a broad cross section of African-Americans, Hispanics, LGBT people feminists, environmentalists and others.

At its heart, it is made up of clergy — mostly on the liberal left.