When I drafted the singles chapter of The Next Mormons, I threw in a line, attributed to Brigham Young, that Mormon culture has a saying that a single man over the age of 25 (or 24, or 27, depending on how the person who is quoting it first heard the saying) is a “menace to society.” I have heard this mentioned at church. It’s also quoted in the rom com The Singles Ward. It’s a thing.

But when I was fact-checking the chapter I couldn’t find it in the Journal of Discourses or in John G. Turner’s outstanding biography of Brigham Young, Pioneer Prophet. So I emailed John to get the scoop, and he responded that it is “very, very unlikely that Brigham Young said this.”

For starters, John said, it’s not in Young’s collected discourses, which you can check out here. I duly downloaded all five (!) volumes of The Complete Discourses of Brigham Young and sure enough, I could not find it. This set includes every known published or unpublished sermon, speech, or discourse of Young’s from 1832 to 1877, so if he ever said it in public, it would be in there.

Second, John noted, Young never used the word “menace” as a noun in his lifetime. (He did use it several times as a verb.)

In fact, the phrase “menace to society” didn’t become prevalent until after Young’s death in 1877.

This was easy to verify. According to a WordWizard search into the Oxford English Dictionary, the earliest usage of “menace to society” occurred in the New York Times in 1884, the Chicago Tribune in 1890, and the Wall Street Journal in 1893. WordWizard found a couple of earlier instances of “menace to,” but not the full phrase “menace to society.” 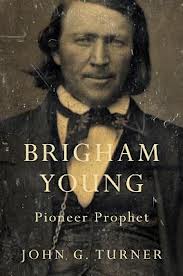 All told, this precise wording is all but impossible given the time period. So the next time someone winds up for the pitch in church by saying, “You know, Brigham Young said that a single man over the age of—” you can just cut them off right there. There’s no credible historical evidence Young ever uttered those words.

That’s not to say that Young wouldn’t have agreed with the gist of the statement, however, even if the words themselves came later. Here’s something he said on the subject of single men in 1868:

I will give each of the young men in Israel, who have arrived at an age to marry, a mission to go straightaway and get married to a good sister, fence a city lot, lay out a garden and orchard and make a home, and especially do not forget to plant a proper proportion of mulberry trees. This is the mission that I give to all the young men in Israel.

So, not only an expectation for hasty marriage but also for a “proper proportion” of mulberry trees so young couples can raise their own silkworms. Bar = raised.

Young didn’t hold much truck with young men who said they couldn’t afford to get married. As part of a General Conference sermon in 1869 about industry and self-reliance, he humblebragged on what it felt like to support not one but multiple wives, as he did.

A great many ask me how many wives I have, but to tell the honest truth I never thought enough about it to stop and think . . . . I suppose I have a dozen or fifteen that I am taking care of, perhaps a few more, I do not know, and I care nothing about it. I try to do good and try to save the people, and I say do not let a lady come to destruction.

Lest you fear he was overly critical of single men, here’s some great news. He also found fault with women! (This was true whether they were single or married.) He called out women who were idle, women who carped on men, women who lived for the fashions of the world, women who didn’t wash their children in his exact prescribed manner, etc.

And people who did not raise their own mulberry trees were simply beyond the pale.

Young didn’t single out single men for judgment; he had more than enough censure for everybody. We are all, to paraphrase him, a menace to society in one way or another.

St. Francis didn’t say that. (Or Thomas Merton. Or Buddha. Or C. S. Lewis.) Where do we get these fake religion memes?