(RNS) — Of the two evangelical pastors who offered prayers Monday (May 14) at the ceremony for the opening of the American Embassy in Jerusalem, Robert Jeffress received most of the publicity. And understandably so.

Jeffress is known for making controversial religious pronouncements. Mitt Romney has rightly criticized President Trump’s choice of a “religious bigot” to participate in this event, pointing to Jeffress’ condemnatory comments about other religions — including the pastor’s characterization of Romney’s own Mormon faith as “a heresy from the pit of hell.” 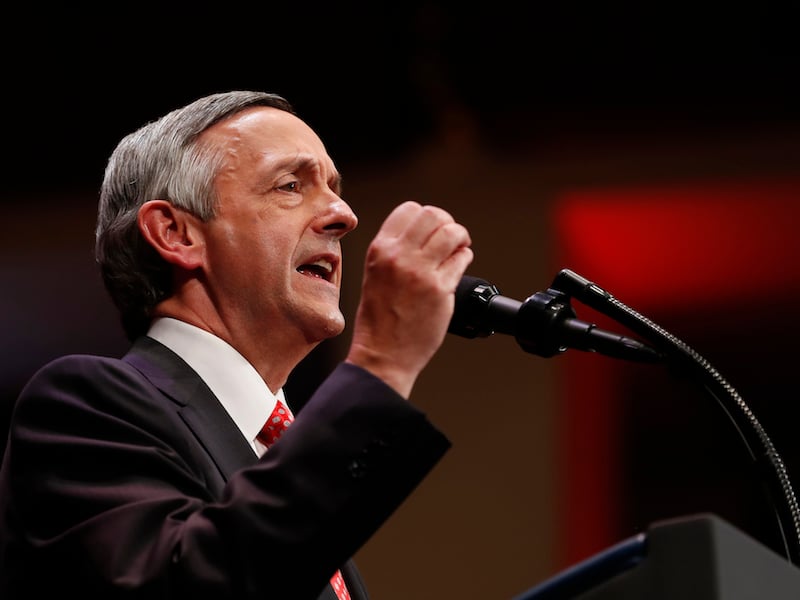 Pastor Robert Jeffress of  First Baptist Dallas Church speaks as he introduces President Trump during the Celebrate Freedom event at the Kennedy Center for the Performing Arts in Washington on July 1, 2017. (AP Photo/Carolyn Kaster)

The most theologically significant prayer at the ceremony, however, was offered by John Hagee, a megachurch pastor from San Antonio. Hagee, a longtime supporter of Israeli policies, thanked the Lord on this occasion “that Jerusalem is and always shall be the eternal capital of the Jewish people.”

“Eternal” covers a long timespan. It is not often that presidential administrations get to make decisions with that kind of staying power, but for those evangelicals who endorse the theology that informed Hagee’s prayer, Trump was simply doing God’s will in relocating the embassy in Jerusalem. They see the establishment of the state of Israel in 1948 as a fulfillment of an ancient prophecy.

Many Jewish people of Jesus’ day, of course, did not accept the claim that he was the promised Messiah — a refusal so serious in Jeffress’ mind that those who continue in the Jewish religion are on a path to hell.

But Jeffress, Hagee and others who hold to this version of the “Bible prophecy” scenario also insist that when Jesus returns the Jews as a people will recognize him as their true Messiah, and Jesus will establish his eternal kingdom in Jerusalem. Israel, in this view, has a great future, and the event this week is yet another step in the unfolding of God’s plan for the ages. Texas evangelist John Hagee, of Christians United for Israel, addresses a crowd of his followers and Israeli supporters at a rally at the Jerusalem convention center on April 6, 2008. (AP Photo/Sebastian Scheiner)

Those of us in the evangelical world who have on occasion publicly criticized the policies of the Benjamin Netanyahu government have been quickly reminded of the ways we are evoking God’s displeasure with us. My hate mail regularly features the promise that God made to Abraham when he informed the patriarch that he would be the father of a great nation: “I will bless them that bless thee, and curse him that curseth thee” (Genesis 12:3).

Well, let the hate mail keep coming, but this needs to be said: It was a shameful thing for evangelical pastors to be celebrating the opening of the embassy in Jerusalem while just a few miles away the Israeli army was killing dozens of Palestinian protesters against Israeli policies. (The death toll stood at 60 as of Tuesday, Palestinian officials said, and more than 1,700 people had been hospitalized.) It’s shameful, not only because they use their theology to make the moving of the embassy from Tel Aviv to Jerusalem a matter of “eternal” significance, but also because they refuse to hold the Netanyahu government accountable for Israel’s treatment of Palestinians, some of whom are themselves evangelical Christians.

Do I fear being cursed by God for saying that it was a shameful thing for these two pastors to join in the celebration at the opening of the Jerusalem embassy? No, because those who so easily invoke that ancient promise fail to think about what it covers. I do want God to “bless” Israel, as did the ancient prophets who regularly delivered divine messages to their compatriots.

But those prophets never called for an uncritical acceptance of whatever happened to be the current policies and practices of Israel’s leaders. Here, for example, is a typical one of those ancient messages from the Lord: “So I will come to put you on trial. I will be quick to testify against sorcerers, adulterers and perjurers, against those who defraud laborers of their wages, who oppress the widows and the fatherless, and deprive the foreigners among you of justice” (Malachi 3:5).

God is not indiscriminate in handing out blessings to Israel. God wants the leaders to promote the cause of righteousness, which has to do with, among other things, how they treat “the stranger in the land.” The ancient Hebrew writers were consistent in emphasizing his point: “And if a stranger sojourn with thee in your land, ye shall not vex him. But the stranger that dwelleth with you shall be unto you as one born among you, and thou shalt love him as thyself; for ye were strangers in the land of Egypt: I am the Lord your God” (Leviticus 19:33-34).

If we want God to “bless” Israel we should keep calling the present Israeli government to treat the Palestinians as those who are “born among you.” We do Israel no favors by praying at its celebrations while ignoring the grave injustices taking place not far away.

The evangelicals who send angry messages quoting the biblical passage about blessings and curses are right to insist that God both blesses and curses nations for what they do. And the time is long past for us as evangelicals to talk seriously together about God’s concern for justice in the Middle East. And while we are at it we can also talk, as evangelicals, about God’s concern for “the stranger” who is within and at our own American borders. It is always important to attend to these things. They are matters for which divine blessings and divine curses are at stake.