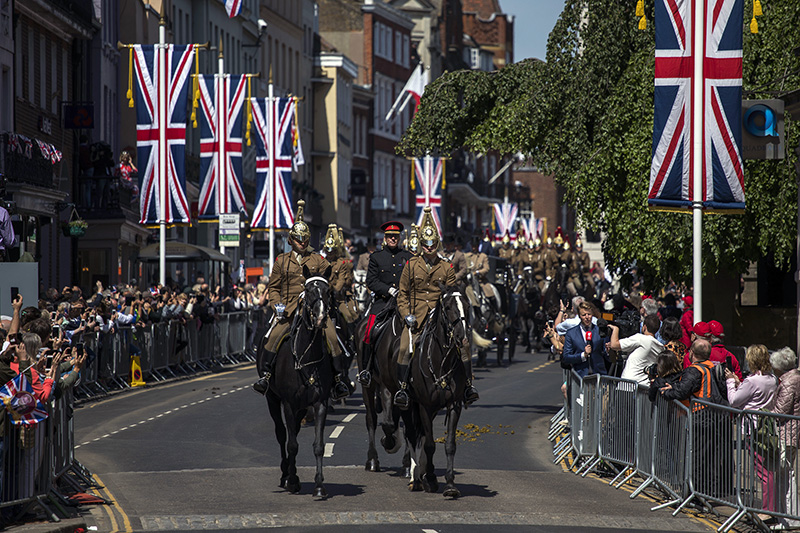 Members of the armed forces ride horses during a parade rehearsal on May 17, 2018, ahead of Prince Harry and Meghan Markle’s wedding Saturday in Windsor, England. (AP Photo/Emilio Morenatti)

(RNS) — As 3 billion people worldwide prepare to watch the royal wedding of Prince Harry and actress Meghan Markle on Saturday (May 19), one faith group is especially keen to make the most of every pageantry-filled moment: Episcopalians.

From North Carolina to Washington state, they’ve been scrambling all week to set up for parish viewing parties, update church websites and get their hands on bingo cards designed to reward those who listen most closely.

And why not? Episcopalians not only trace their religious roots through King Henry VIII, whose 16th-century reign ushered in the Church of England. They’ll also have one of their own in the pulpit when Presiding Bishop Michael Curry delivers the wedding sermon.

“The idea that someone you’ve (known), that this individual with this message, is given the opportunity to be heard by 3 billion people — how could we not be listening to this together while he delivers this good news to the entire globe,” said Helen Probst-Mills, who will join fellow members of Emmanuel Episcopal Church in Southern Pines, N.C.,  for a 6:30 a.m. viewing party at the parish. “The whole point is that we’re all hearing it while the rest of the globe is hearing it.”

Curry leads the 1.7 million-member Episcopal Church, which encompasses dioceses in 17 countries, including the United States. He’s the church’s first African-American bishop and the first American to give a homily address at a royal wedding. For the Episcopal Church, the occasion marks a moment of opportunity to welcome newcomers and show the world Episcopalians are not entirely marginalized for their progressive views on gay ordination and same-sex marriage.

“After all those threats of schism … the presiding bishop has been invited to preach at a royal wedding,” said the Rev. Susan Russell, senior associate for communication at All Saints Episcopal Church in Pasadena, Calif. “It’s hard not to be proud that Bishop Curry will bring the good news not only to the royal couple but to everyone who has ears to hear.”

The Episcopal Church has had a bumpy ride since 2003, when the church’s first openly gay bishop, the Rt. Rev. Gene Robinson, was consecrated in the Diocese of New Hampshire. Hundreds of congregations left the denomination to join the newly formed Anglican Church in North America. After the Episcopal Church redefined marriage to include same-sex couples in 2015, the church was barred from Anglican Communion decision-making and from ecumenical dialogue on behalf of the communion. From 2006 to 2016, the denomination’s active membership dropped by 19 percent, according to the most recent Episcopal Church statistics.

But none of that history is the focus this weekend, when all eyes turn to St. George’s Chapel at Windsor Castle for the main event.

Probst-Mills and fellow Emmanuel parishioner Lynn Healy got the idea for a viewing party two days after Curry’s address was announced. They had gotten to know Curry in his prior role as bishop of North Carolina and are excited for him to step onto his biggest stage yet.

Meanwhile, some sermon watchers are going to pay particular attention to his words — and by design.

Specifically, the design comes in the form of a bingo card, where listeners can mark off Curry’s use of phrases known to pepper his sermons, such as “I’m not going to be up here long” or “If you’re breathing, God’s calling.”

The communications staff of the Episcopal Diocese of Fort Worth, Texas, put together a “Michael Curry Sermon Bingo” card that can be downloaded and printed for use during the broadcast. Demand for the download was so great, according to Communications Director Katie Sherrod, that the diocese’s website crashed for several hours on Wednesday.

Sherrod noted that “in the wake of Barbara Bush’s funeral (on April 21), our website got thousands of hits asking about the Episcopal Church,” which led staffers to wonder what the response to Curry’s royal wedding role might bring.

“We were just trying to look at our website through new eyes,” Sherrod said. “Not through the insider’s eyes, but the (eyes of the) seekers.”

That led Sherrod and colleagues to adapt an infographic on the “Top Ten Things You Might Hear Michael Curry Say in a Sermon” and then develop the game card.

“We hope it gives people fun and gets them to focus on what Michael is saying,” Sherrod said. “He can change lives with this sermon, and we hope they’ll pay attention to what he’s saying.”

At the Church of the Advocate in Chapel Hill, N.C., about 10 members will gather early Saturday to watch the wedding live, said the Rev. Lisa Fischbeck, rector of the 175-member parish.

“If Michael weren’t preaching, we’d watch the reruns on YouTube,” Fischbeck said. “Here he is, one of our own, going to speak at the royal wedding — and there’s something pretty stunning on its own.”

But, she added, it’s the sermon more than the ceremony that’s the draw.

“It’s got to be something good to get me out of bed so early in the morning,” she said.

Not every Episcopal church will host a viewing at the crack of dawn, however. St. Bartholomew’s Episcopal Church in New York City will convene a British-style tea at 1 p.m. and show a recording of the event. On the menu: cucumber sandwiches, scones and strawberries with clotted cream.

Vicki Zust, spokeswoman for the Episcopal Diocese of Western New York, which includes Curry’s hometown of Buffalo, said pre-wedding publicity about Curry’s address has boosted web traffic by 30 percent. Zust said parishes around the diocese are getting ready for new visitors on Sunday, the day after the nuptials.

Episcopalians are hopeful they can capitalize on all the attention paid this weekend to Anglican ritual and spirituality. If all goes well, Curry might be their ticket to framing the church in a fresh light.

“For those who know enough about Christians not to want to be one,” Russell said, the wedding brings a chance “to hear someone who gives a message of justice and compassion.”