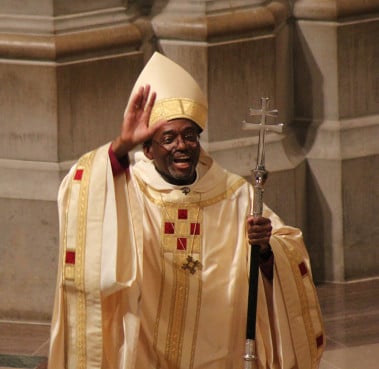 On Saturday, Michael Curry, Presiding Bishop of The Episcopal Church (TEC), will be giving the sermon at the wedding of Prince Harry and Meghan Markle.

For those of you who are interested in the British royal family, this gig would seem to involve some identity politics. As an African-American, Curry can count the bride, a biracial Yank, as one of his peeps.

It was two months ago that the future Princess Meghan was baptized and confirmed into the Church of England (CoE) by the Archbishop of Canterbury (ABC), Justin Welby. Welby will be officiating at the wedding, just as one of his predecessors, Robert Runcie, officiated at the wedding of Harry parents, Prince Charles and the late Princess Diana.

What’s of interest to this column, which in all candor could care less about royals, is the ABC’s hearty endorsement of the designated preacher—naturally enough in this day and age, via tweet:

I’m thrilled that Prince Harry and Meghan Markle have asked Bishop Michael Curry to preach at their wedding. @PB_Curry is a brilliant pastor, stunning preacher and someone with a great gift for sharing the good news of Jesus Christ.

Curry is doubtless all of those things. But he also happens to be the head of a Church—or, as the Anglicans say, Primate of a Province—that is disdained by a goodly portion of what’s known as the Anglican Communion. A couple of years ago, a majority of the other Primates, most of them hailing from the Global South, met in Canterbury and issued a communiqué “requiring” TEC not to participate in decision-making roles on ecumenical or internal committees of the Anglican Communion for a period of three years.

The communiqué was provoked by TEC’s decision to change canonical language defining marriage as being between a man and a woman and authorizing two new marriage rites with language allowing them to be used by same-sex or opposite-sex couples. For the record, the Anglican Communion has no authority to require any of its constituent members to do or not do anything.

For its part, the Church of England is currently in the midst of its own vigorous debate over same-sex marriage.

TEC’s plan to change its marriage service to accommodate same-sex couples was sharply criticized by CoE General Secretary William Nye in a letter—written in October but only made public last month—that threatened to cut ties with the U.S. Church. Pushback has come  in the form of an open letter from 300 Anglicans including Alan Wilson, the bishop of Buckingham, taking exception to Nye’s letter.

It’s not unlikely that Welby played a part in selecting Curry to preach the royal wedding sermon. And it’s impossible to see his enthusiastic sanctioning of the TEC Primate as anything but a rebuke to his own general secretary.

What Curry has to say in re: marriage could be quite interesting.