DURHAM, N.C. (RNS) — Long before President Trump’s travel ban, barring entry to the U.S. from several mostly Muslim countries, and before millions of Syrians and Iraqis fleeing civil war began flooding Europe and trickling into the U.S., there was another wave of Muslim migration to this county.

Almasa Bass was among them.

She and about 130,000 other Bosnian Muslims, known as Bosniaks, settled in the U.S. as a result of the bloody conflict in the former Yugoslavia. Arriving in Washington state as a teenager alongside her parents and her younger sister, Bass started life anew — learning a new language and a new culture and adopting a new national identity.

On World Refugee Day (June 20), established by the United Nations to draw attention to the plights of the world’s 68.5 million displaced people (about 25 million are refugees), Bass is grateful to President Clinton and the U.S. for providing her family refuge and a home.

But she looks around with sadness at the difference 20-plus years have wrought.

“When we came here we felt welcomed. We never felt any vitriol, and to this day I never felt any animosity because of who I am,” said Bass, 41, who now lives in Durham, N.C., with her husband and 8-year-old son.

He has pushed for a crackdown on asylum seekers, a reduction in immigrant visas and the construction of a border wall. His “zero-tolerance” policy calls for criminal prosecution of all those caught illegally crossing the border. And in recent weeks he separated parents and children at the border.

It’s part of a larger post-World War II rethinking about refugees and other migrants happening not only in the United States but across Europe, too, said Niklaus Steiner, director of the Center for Global Initiatives at the University of North Carolina at Chapel Hill.

After the war, Western leaders were willing to offer respite to war-weary citizens of the world’s conflict zones. The rise of of nationalism is changing all that. Refugees are now caught in the middle.

“It’s ultimately about identity,” Steiner said. “A country’s refugee policy is about how it sees itself and wants to be seen by others.”

Increasingly, the U.S. doesn’t want to be seen as taking in immigrants, whether they are crossing the border from Latin America or fleeing war and persecution abroad, Steiner said. 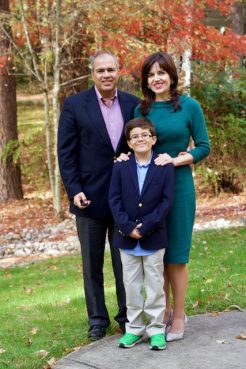 Steffen, left, and Almasa Bass with their son, Reiner, in 2017. Photo courtesy of Almasa Bass

Bass is careful to note that immigrants are different from refugees. The first want to move; the latter have to.

“My parents would never have thought of uprooting themselves and moving,” she said. “They didn’t have a choice.”

In 1992, Bosnia-Herzegovina declared its independence from Yugoslavia. Over the next several years, Bosnian Serbs began an ethnic cleansing campaign directed at Muslims, resulting in the deaths of some 100,000 people. It was considered the worst act of genocide since the Nazi regime’s destruction of some 6 million Jews during World War II.

Bass’ family, the Hadziahmetovics, were among the displaced. They lived in the town of the Donji Vakuf, about 80 miles north of Sarajevo, when the fighting began. As the Serbs began razing property and terrorizing the Bosniaks, Almasa, her mother and sister were able to leave to nearby Croatia, where they doubled up in friends’ summer home and later in a hotel overtaken by others fleeing Bosnia.

Her father joined them three months later, trekking on foot over the mountains with a group of other fleeing Muslims. Bass’ grandmother was less fortunate. She was beaten to death by Serb soldiers.

Thanks to U.S. refugee policy, the family was able to come to America. They arrived in Washington state in December, 1993, and were taken in by Kathleene and Randy Carville of Benton City. The Carvilles are evangelical Christians, and at the time, worshipped at a Foursquare church that encouraged its members to sponsor refugees.

The fact that the Hadziahmetovics were Muslim was never an issue.

“The Lord says to help refugees,” Carville said. “If you can, you should. So I did.”

Several months later, the family found an apartment with the help of a local mosque. But they eventually relocated to Toledo, Ohio, where Bass’ parents were able to find a series of factory jobs through a network of Bosnian expats.

Bass and her sister had begun learning English in school back in Bosnia. Now they became American teens, riding a school bus and watching TV sitcoms such as “Saved by the Bell.”

Both girls were determined to do well in school. Almasa graduated from high school and eventually earned a doctor of pharmacy degree. Her younger sister, Mersiha, became an oncologist.

Bass now works for a pharmaceutical company as a medical science liaison in infectious diseases. She is one of the founding members of the Bosnian-Herzegovinian American Academy of Arts and Sciences.

She notes how another refugee scientist, Albert Einstein, fled Nazi persecution to resettle in the U.S.

“Refugees have contributed quite a bit to the advancement of science and technology in the U.S.,” she said.

Bass said she dreams of helping people of all ethnic groups in the Balkans get genetic testing to access their personal genome and learn about their ancestry. She expects the results will show “we’re much more alike than we’re different.”

Several years ago, her parents returned to Bosnia and fixed up their home, which suffered significant damage during the war. They are now retired and tend to their garden and their dog.

But Bass  remains a proud U.S. citizen and wants her legacy to be defined beyond the circumstances of her youth. Like many Bosniaks, she does not wear a headscarf and these days she feels less connected to the Muslim community.

“I don’t want to be branded as a refugee, but as a productive citizen who gives back and pays it forward,” Bass said. “I want to be part of something bigger than my own story.”