(RNS) — Last week during the height of the media’s fixation on the United States’ southwestern border, some accused the evangelical leaders who advise President Trump, of whom I’m one, of staying silent about children being separated from their parents. While this is not a new problem, the media’s attention has brought it to the forefront of public discussion, and I have been a part of that discussion.

Our relationship with the administration means that we have the opportunity to communicate our concerns, which we have done and continue to do. In a meeting last week between Attorney General Jeff Sessions and a small group of evangelical leaders and pastors, including me, the message was clear: We support the rule of law, the “zero-tolerance” policy, but we also want to see a compassionate response to the families attempting to cross the border illegally.

The dramatic increase in families flowing across the border has also led to a growth in the exploitation and trafficking of children. According to the administration, there has been a 315 percent increase in adults detained at the border with minors who turned out not to be their children. We also discussed expanding the use of DNA tests to verify family relationships to prevent or at least deter human trafficking.

In fact, being compassionate and upholding the rule of law are not competing and incompatible ideals; to the contrary, justice and mercy are cornerstones of civil society.

In the absence of comprehensive action by Congress — which would address all the factors that have contributed to the current situation — Trump’s executive order on detaining families at the border establishes a framework for addressing the crisis that is both consistent with our law and compassionate in its application.

Our government cannot make any headway if its measures are not enforced. Over the last decade and a half, previous administrations have failed to uphold the rule of law on the border, undercutting the very foundation of genuine compassion and leading to the current crisis. The ugly scenes of families being separated are blatant examples of the cruelty that flows from ignoring the law.

We see this in the growth of families as a percentage of illegal immigrants coming across the border. From October 2012 to September 2013 (fiscal 2013), just under 15,000 families were apprehended at the U.S. Border Patrol’s southwest border stations. By fiscal 2017, that number had mushroomed to over 75,000.

What drove the 400 percent increase? The rapid and unsustainable growth in families illegally crossing the southwest border is the result of a combination of factors.

First, the growing violence, poverty and instability of Central America are causing many families to flee countries like El Salvador, Honduras and Guatemala. According to the United Nations, from 2011 to 2016 there has been an astounding 2,249 percent increase in the number of people just fleeing these three countries.

This situation has been compounded by the Obama administration’s unilateral decision in 2012 not to adequately enforce the immigration laws. Without congressional action, the Obama administration effectively declared through the Deferred Action for Childhood Arrivals policy that an estimated 800,000 children who’d come to the U.S. illegally would not be deported.

This fueled a steady flow of unaccompanied minors illegally crossing the U.S.-Mexico border. Just two years after DACA, the number of unaccompanied children, some as young as 3 and 4 years old, exploded, with 28,579 of them being apprehended at the border.

Intentionally or not, a further policy dictating that adults apprehended at the border with children would not be arrested but released pending a deportation hearing would turn children into free tickets to cross the border.

Most Americans recognize that parents who choose to send or bring their children on the dangerous and often deadly journey across the border bear the ultimate responsibility. But we cannot ignore the contributing factors of societal instability and the lax enforcement of our laws; both serve as incentives. These issues, combined with many problems within our current immigration law, make it abundantly clear Congress must act on comprehensive immigration reform.

If the executive order survives the courts, it will undoubtedly be more compassionate than previous policies, which enticed parents and other adults attempting illegal crossings to subject children to the dangers of the desert, the division of families and even death.

(Tony Perkins is president of Family Research Council. The views expressed in this commentary do not necessarily reflect those of Religion News Service.) 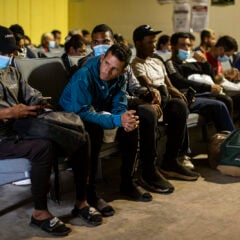