(RNS) — Each week Religion News Service presents a gallery of photos of religious expression around the world. This week’s gallery includes reactions to the U.S. Supreme Court travel ban decision, Hindu festivals in Asia, and more. 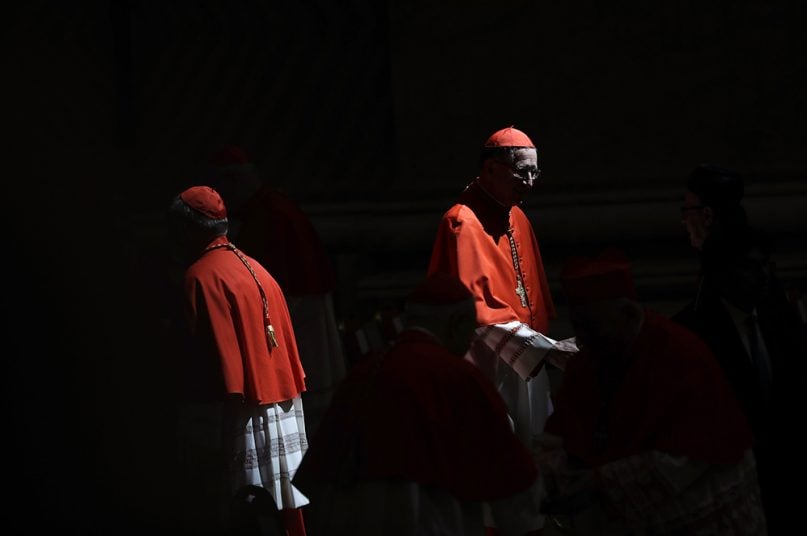 Cardinals take their places prior to a consistory in St. Peter’s Basilica at the Vatican, on June 28, 2018. Pope Francis made 14 new Cardinals during the consistory. (AP Photo/Alessandra Tarantino) A Muslim man and a Jewish man ride a tandem bicycle together during a tour to campaign against religious intolerance in Berlin, Germany, on June 24, 2018. (AP Photo/Markus Schreiber) A protester holds up a sign that reads “No Muslim Ban Ever” as he protests against the Supreme Court ruling upholding President Trump’s travel ban outside the the Supreme Court in Washington, on June 26, 2018. (AP Photo/Carolyn Kaster) Indian Hindu married women perform ritual prayers and tie cotton threads around a Banyan tree for the Vat Savitri festival in Ahmadabad, India, on June 27, 2018. Vat Savitri is celebrated during a full moon day, and women pray for the longevity of their husbands. (AP Photo/Ajit Solanki) Members of the ancient Samaritan community pray during the holiday of Shavuot on Mount Gerizim near the West Bank town of Nablus, early Sunday, June 24, 2018. Samaritans descended from the ancient Israelite tribes of Menashe and Efraim but broke away from mainstream Judaism 2,800 years ago. Today, the remaining 700 Samaritans live in the Palestinian city of Nablus in the West Bank and the Israeli seaside town of Holon, south of Tel Aviv. (AP Photo/Majdi Mohammed) Hindu priests pour milk on idols of deities Lord Jagannath, Balabhadra and Subhadra during the holy “Snan Yatra” or bathing ceremony in Kolkata, India, on June 28, 2018. The ritual was held ahead of an annual chariot procession scheduled for July 14. (AP Photo/Bikas Das) A Thai Buddhist monk prays for 12 boys and their soccer coach in Mae Sai, Chiang Rai province, in northern Thailand, on June 27, 2018. Rain continued to fall and water levels kept rising inside a cave in northern Thailand, frustrating the search for the boys and the coach who have been missing in the sprawling underground caverns since last weekend. (AP Photo/Sakchai Lalit)