(RNS) — For some American Buddhists, seeing a photo of Mipham Rinpoche on the front page of The New York Times this week was a shock. Though he’s the leader of the largest Western Buddhist organization, Shambhala International, Rinpoche rarely draws attention from the mainstream press.  His last appearance in the Times was in 2005 when he ran the New York City Marathon.

This time the headline read: “The ‘King’ of Shambhala Buddhism Is Undone by Abuse Report.”

Certainly those who have found in Shambhala, based in Nova Scotia, a community that offers the promise of well-being and steady inner peace, the allegations that Rinpoche had sexually abused female followers for years are powerfully disillusioning.

As a psychoanalyst, a woman, and long-term practitioner of Tibetan Buddhism, I find these recent allegations sadly predictable. Some years back a documentary about Mipham Rinpoche’s father, the famous Chogyam Trungpa, was released, detailing his life as a beloved spiritual mentor. The film failed to explore Trungpa’s personal trauma history, his well-known addiction history, and countless examples of sexual misconduct.

Trungpa fled Tibet amid severe political turmoil, survived a life-threatening car accident, and founded a Buddhist community in a country far from home. He was also a heavy drinker, and engaged in behaviors that most clinicians would identify as clear indicators of trauma, possibly psychosis.

Yet Trungpa’s students were encouraged to interpret these extreme behaviors as examples of “crazy wisdom.” As in all Tibetan traditions, they were taught to perceive Trungpa as an enlightened being, and to cull spiritual meaning from his every word and action.

Teachers, however, are people, too. They have the capacity to get badly hurt, and like many, to protectively resist seeking help for problems that have become too much to manage alone. When they are identified as exceptional beings, endowed with spiritual insight that can generate boundless healing, teachers may feel they have to camouflage their personal problems — hide them away somewhere and live up to the idealizations they are saddled with.

The healthier spiritual teachers, such as the Dalai Lama, routinely try to soften students’ need for an ideal mentor.

“I’m just an ordinary monk,” he often says, as a needed reminder that he too suffers, needs help, gets annoyed, and must set limits to stay sane.

These reality checks help spiritual seekers cultivate within themselves the attributes they are tempted to place solely in the teacher. This gets to the basic Buddhist teaching – that the capacity for genuine well-being does not belong to the lucky few. It’s within us all, but must be cultivated and nurtured. 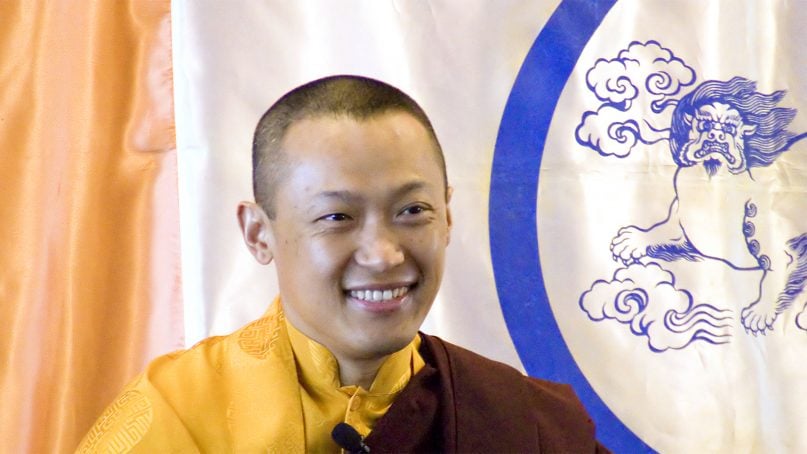 Mipham Rinpoche in Munich in 2007. Photo courtesy of Creative Commons

With the revelations about Mipham Rinpoche, we are contending with another generation of spiritual teachers who have clearly caused pain and suffering to many women and their loved ones. In the psychoanalytic tradition, there’s extensive discussion of what we call the intergenerational transmission of trauma. Research shows a parent’s acute, unaddressed suffering will be transmitted to the child through the attachment system; other studies have suggested that trauma is transmitted genetically, as is addiction.

If Rinpoche’s father sought refuge from feelings of aloneness and alienation by seeking sex and alcohol, in other words, it’s more than possible that his son inherited both the pain of feeling too alone and the defense against it through sex, the fantasy of being desirable to all, and the attempts to soften any residual guilt and shame through drinking.

There is a lesson here for all religious communities. No matter the wisdom a teacher or pastor or imam dispenses, no one is exempt from psychological suffering.

If this were more commonly understood in religious communities, it would be less shameful for exalted spiritual mentors to receive clinical treatment. It would also help students understand that it is possible to be simultaneously gifted and disturbed.

Great gifts of spiritual insight can coexist with psychological and psychiatric illness. Our talents and our troubles deserve respect and care. This is something I’ve tried to emphasize as a clinician active in spiritual communities where psychological problems are often treated as spiritual ones.

When Trungpa’s transgressions came to light, the #MeToo movement had not yet begun.I appreciate all the women who have risked exposing their personal pain in this movement. These acts of courage have ushered in a new level of awareness that sexual abuse and harassment are far too common in women’s experience, across socio-economic, racial, and religious differences.

I would respectfully add that the Buddhist tradition has also been impacted by the sexism and misogyny that a patriarchal perspective creates. What we have learned about in the Shambhala crisis is not due solely to personal trauma; it is also informed by a culture that sexualizes and insufficiently respects women.

Perhaps in the years to come, the #MeToo allegations will usher in a growing awareness that sexism invariably sets the stage for suffering in all faiths. I hope for mine that it will create increased opportunities for female Buddhist teachers, and male Buddhist teachers who have grappled with their own tendencies and values regarding gender and sexuality.

Doing so will go a long way toward living out the historical Buddha’s primary wish: to understand and reduce suffering until all human beings are well because they have learned to live in a way that does no harm, to self or others.

(Pilar Jennings is a writer and psychoanalyst in private practice based in New York City. The views expressed in this commentary do not necessarily represent those of Religion News Service.)