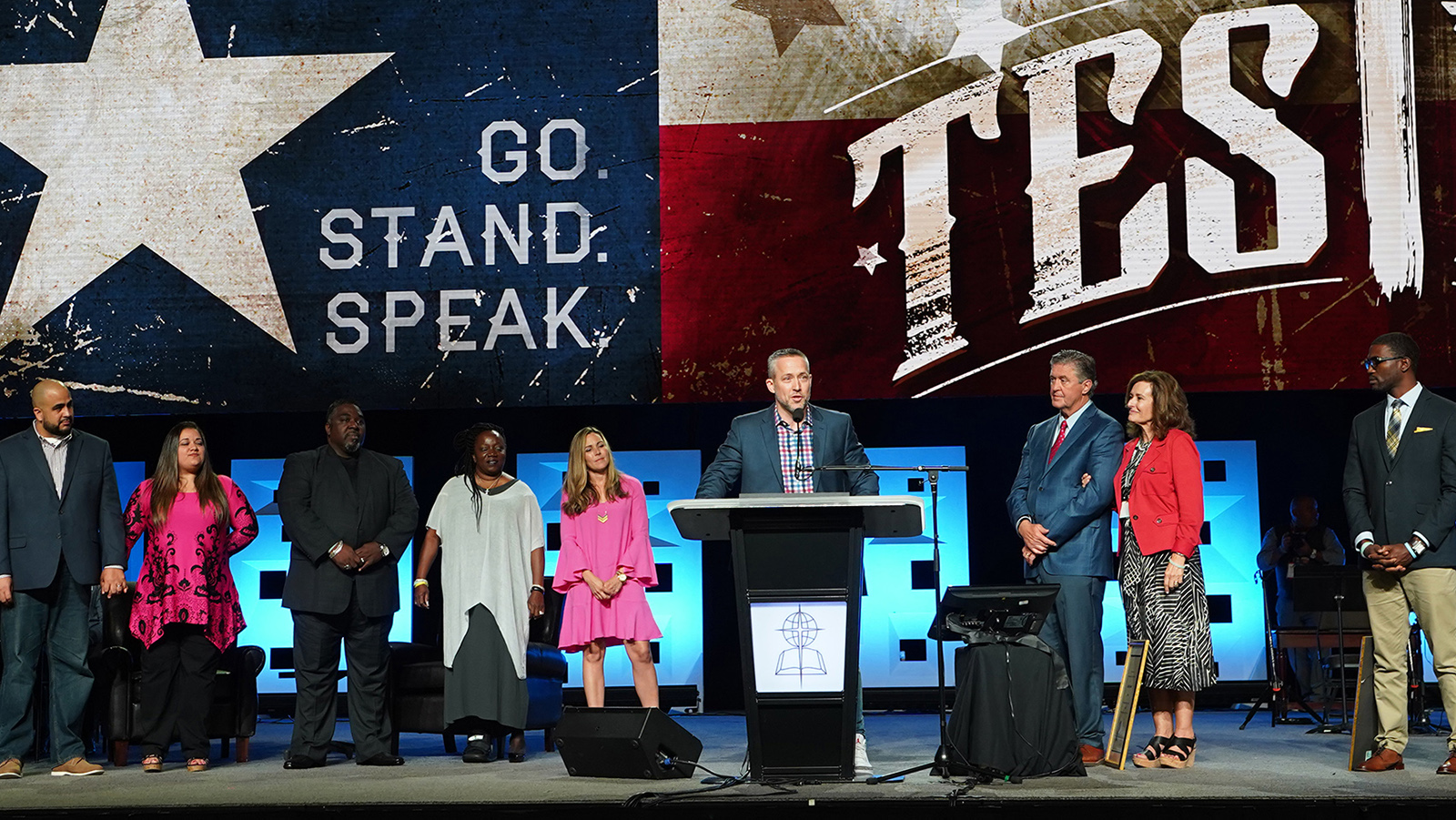 J.D. Greear, center, newly elected president of the Southern Baptist Convention, accepts the gavel from outgoing SBC president Steve Gaines, right, as newly elected officers and their spouses, left, are recognized on stage during the closing of the 2018 SBC annual meeting in Dallas on June 13, 2018. Photo by Matt Miller via Baptist Press

(RNS) — J.D. Greear has big intentions as he begins his presidency of the Southern Baptist Convention. He hopes to help the denomination step away from partisan politics and lean more on its bedrock mission of preaching the gospel and saving souls.

The first Generation X president of the nation’s largest Protestant body said he wants to focus more on what Southern Baptists embrace than what divides them.

“We have a lot of variety in our ranks when it comes to ethnicity and when it comes even to politics and age,” Greear, 45, told Religion News Service in an early July interview. “But what we’re unified around is gospel, gospel doctrine and gospel mission.”

How much the North Carolina megachurch pastor will succeed depends on how he responds to the challenge of the #MeToo movement that roiled the Southern Baptists’ annual meeting in June, as well as declining membership, historical ties to slavery and linkages with the Republican Party.

“He’s at a starting point where he’s saying to the denomination, one of the reasons that the culture is not listening to you the way they once did, particularly in the South, is that you have become so politicized as a denomination and in American politics,” said Bill Leonard, professor emeritus of Baptist studies at Wake Forest University School of Divinity.

“People are distancing themselves from you because it looks as if in order to choose Jesus, you have to choose the Republican Party.” J.D. Greear speaks during the Pastor’s Conference on June 11, 2018, at the Kay Bailey Hutchison Convention Center in Dallas. Photo by Marc Ira Hooks via Baptist Press

The day Vice President Mike Pence spoke to the SBC’s June meeting — a scheduled 15-minute time slot that became a 35-minute address, including a list of Trump administration accomplishments — Greear tweeted that it sent “a terribly mixed signal.” Weeks later, he remained concerned about the impression it could leave on observers.

“Right or wrong, a lot of our people of color are wondering: Is this what the SBC is about, that kind of white populism?” Greear told RNS. “There’s a place for that discussion, but it’s not in a convention of churches who come together to focus on the gospel and mission.”

While some of Greear’s Southern Baptist colleagues have made several trips to Washington to meet with the Trump administration, the new SBC president said he has made one. During his visit with aides to the president, he emphasized the administration’s need to “speak with clarity on our respect for people of different races and different cultural backgrounds.”

Despite appearing in a group photo outside the White House, Greear said he does not consider himself to belong to an ad hoc advisory council to the president.

“I was there to try to speak God’s word and say ‘thus says the Lord’ in places where it was asked of me,” said Greear, who has authored six books, including, “Not God Enough: Why Your Small God Leads to Big Problems.”

But critics say Greear may have stepped on his nonpolitical emphasis just a month after his election when he signed two statements supporting President Trump’s nomination of Brett Kavanaugh to succeed retiring Supreme Court Justice Anthony Kennedy.

Greear said that he and the two SBC vice presidents believe Kavanaugh’s record demonstrates his support for the “sanctity of life, the value of religious liberty, the dignity of all peoples.” 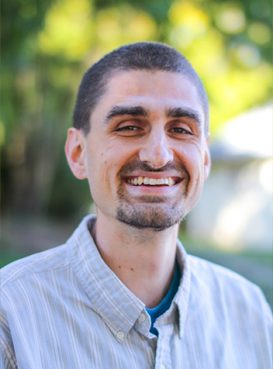 Jonathan Wilson-Hartgrove, a fellow North Carolinian and Christian activist who differs with Greear on cultural issues, questioned what he considered the narrow focus of the SBC officers on core conservative issues.

“That’s to completely ignore the way this Supreme Court nominee has voted on the circuit court on voting rights, on access to health care, on equal protection under the law for women and for LGBTQ people,” said the author of “Reconstructing the Gospel: Finding Freedom from Slaveholder Religion.”

Wilson-Hartgrove, a white evangelical who was raised in a Southern Baptist church, said the commitments to racial inclusiveness like the ones voiced by Greear and other leaders may be “cosmetic,” especially if there is not enough attention to social justice issues.

But others are praising Greear, who pastors a multiracial church, for his commitment to be inclusive in his congregation and to see more people of color in positions of power within the SBC.

RELATED: J.D. Greear is ready to give Southern Baptists a makeover

The Rev. Dwight McKissic, a black Arlington, Texas, pastor who was the original author of last year’s SBC resolution that ultimately condemned “alt-right white supremacy,” said Greear’s nonpolitical aims distinguish him from many SBC presidents who have been more committed to supporting the GOP. He considers Greear’s support of Kavanaugh, especially in light of conservative hopes about overturning Roe v. Wade, a “principled move” rather than a political one.

De-emphasizing politics in the denomination doesn’t mean that Greear won’t be “prophetic” when it comes to justice issues, McKissic said. “He’s expressing a desire for equality, empowerment, inclusion of women and different ethnic groups in SBC life.” 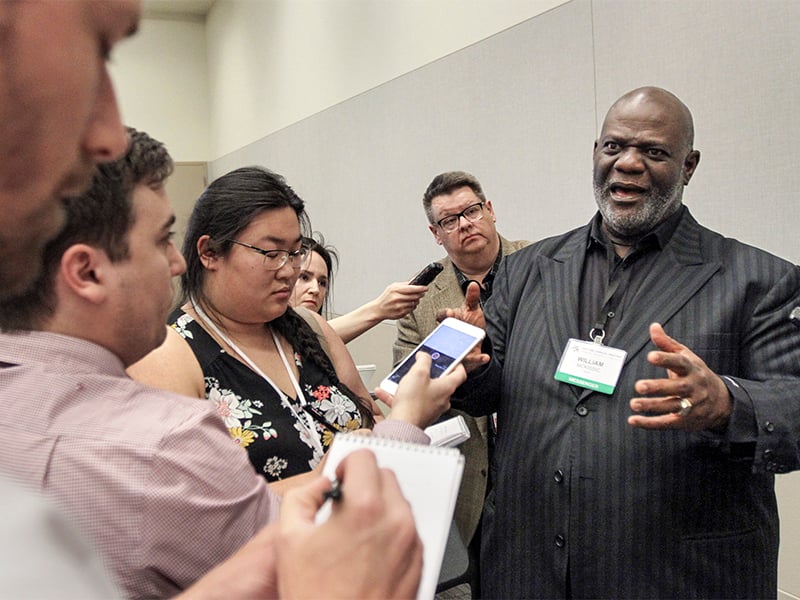 McKissic hopes that the percentage of racial and ethnic minorities serving on SBC agency trustee boards — who can hire and fire heads of seminaries and mission boards — will increase under Greear’s leadership after recent decreases. Statistics show undulating results in recent years: 16 percent in 2015; 25 percent in 2016; 14 percent in 2017; and 12.6 percent in 2018.

In the aftermath of a scandal involving Paige Patterson, an SBC luminary ousted in May from the presidency of Southwestern Baptist Theological Seminary for allegedly mishandling rape allegations by students, Greear is looking to include more women as well. Longtime admirers of Patterson, Greear said, are grappling with seeing him in a new light while recognizing that everyone should be held accountable. But he also said a recent letter from donors seeking a reconsideration of Patterson’s termination was not beneficial.

“I did not think that the letter pointed a helpful way forward because it basically is like, ‘hey, put us on your investigative committee or we’re going to stop giving our money,’” he said.

Last week, a month after anti-abuse activists demonstrated outside the Southern Baptists’ meeting in a For Such a Time As This Rally, a Greear representative met with a protest organizer to hear about the group’s continuing push for training to address domestic abuse and sexual assault.

Greear’s calls for repentance on the SBC’s failings — from mishandling reports of abused women and adulterous behavior by male leaders to its need for more people of color at boardroom tables — are signs of a “fresh wind blowing” in the SBC, said Karen Swallow Prior, one of the signers of an online letter urging seminary trustees to take action against Patterson. She said Greear is modeling a way to deal with the complexity of the Patterson scandal. 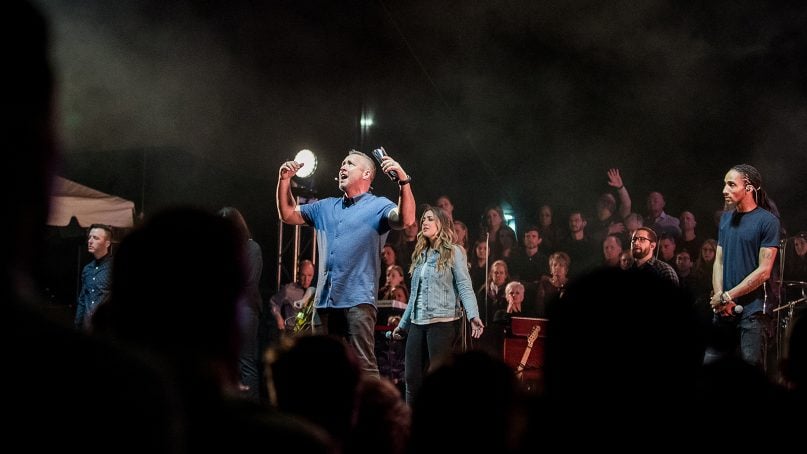 “It takes that kind of wisdom of Solomon to distinguish the good from the bad and to not brush in broad strokes but to still work toward changing the things that need to be changed,” said Prior, a professor of English at Liberty University.

Greear, she said, is “separating conservative theology with the cultural baggage that has resulted in the oppression of women and minorities. Those two are not the same thing.”

Russell Moore, leader of the SBC’s Ethics and Religious Liberty Commission and another official who has challenged the denomination’s ties to the GOP, said Greear is riding a wave of younger people attending the annual meeting while people of multiple generations are embracing his vision for the SBC’s future. The 2018 registration report from the SBC Executive Committee found that a quarter of surveyed attendees were 18 to 39 years old, compared to about a fifth the previous year.

“There’s definitely much more excitement and engagement on the part of younger people that’s been building for several years,” said Moore. “And the sign of a healthy denomination is a denomination that has both strollers and walkers. We need both and we need everything in between.”

As Greear juggles his new role as president while continuing to pastor his college-student-dominated megachurch, he said he hopes to make progress but that he doesn’t have all the answers for the challenges ahead for Southern Baptists.

“I’ll be one chapter in a conversation that will take an entire book to tell,” he said.