DALLAS (RNS) — The sermons, the hymn singing and the floor debates of the Southern Baptists’ annual meeting have concluded, but a key question remains: How will the denomination address the issues of sexual and physical abuse that loomed over the proceedings?

At this week’s (June 12-13) meeting, there was a sense that the nation’s largest Protestant denomination has only started down a long road toward an answer after months of scandals. Days before the Southern Baptists arrived here, Paige Patterson, an architect of the faith group’s conservative turn in the 1980s, was ousted from the presidency of Southwestern Baptist Theological Seminary after reports arose of his mishandling rape allegations by students. Other former luminaries have been accused of abuse or left positions unexpectedly due to immoral behavior.

The alleged untoward behavior by Southern Baptist leaders forced many of the messengers, as delegates to this meeting are called, to grapple with how to rein in abuse while respecting the autonomy of the convention’s local churches. One step that the messengers took was to pass a nonbinding statement that suggested that “church and ministry leaders have an obligation to implement policies and practices that protect against and confront any form of abuse.” 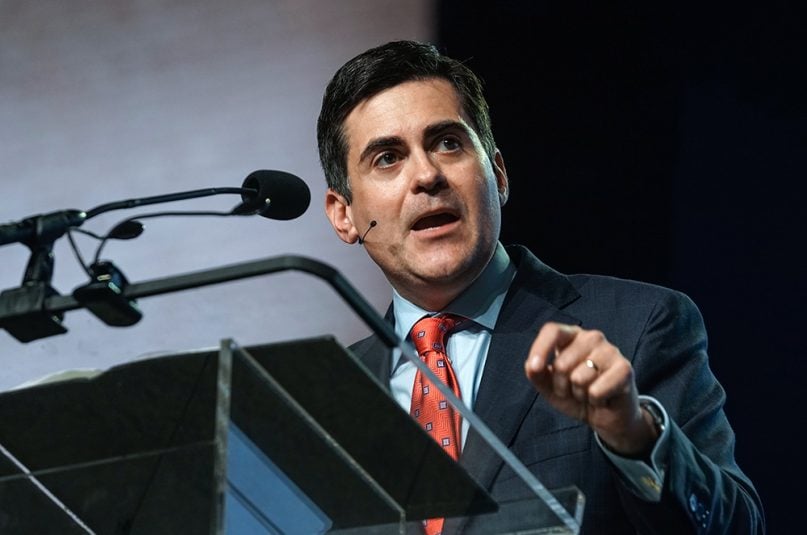 Russell Moore, president of the Ethics and Religious Liberty Commission, gives a report during the final session of the two-day Southern Baptist Convention annual meeting on June 13, 2018, in Dallas. Photo by Kathleen Murray via Baptist Press

The convention’s Ethics and Religious Liberty Commission announced that it will partner with a research firm to study the extent of abuse that is occurring in churches. The commission also has been referred a request from a messenger to evaluate the feasibility of establishing an “online verification database” of known sexual predators among ministers and other church personnel. It is scheduled to respond to that request at next year’s annual meeting.

Historian Bill Leonard said that a national database would be a challenge for the fiercely independent Southern Baptist congregations.

“It gets at the heart of both the freedom and the problem of Southern Baptist congregational autonomy,” said Leonard, professor of Baptist studies at Wake Forest University’s Divinity School in Winston-Salem, N.C. That autonomy, he said, “has often limited the ability to monitor the personal, moral and ethical life of candidates for ordination.”

Even proponents of the database are cautious about what it would mean for local churches’ independence. Oklahoma pastor Wade Burleson, who first suggested that churches share abuse information at an annual meeting more than a decade ago, noted that it would need to be maintained “in a manner consistent with our traditions of church autonomy and redemptive ministry.” Ginny Dodson attends the “For Such a Time as This Rally” outside the Southern Baptist Convention annual meeting at the Kay Bailey Hutchison Convention Center on June 12, 2018, in Dallas. RNS photo by Adelle M. Banks

Some congregations are already taking some precautionary measures to help avoid having predators in their midst. “More and more churches are doing background checks of the people they ordain and they’re doing it because of the danger of being sued if those persons are convicted of varying degrees of criminal acts, from embezzlement to sexual abuse,” said Leonard, who has recently served as an expert witness in lawsuits against churches that have ordained a minister accused of abuse.

The pressure to address abuse is not likely to end with the annual meeting’s last gavel. At a “For Such a Time as This Rally” held Tuesday outside the Kay Bailey Hutchison Convention Center as the messengers met inside, several dozen people, including anti-abuse activists of other faiths and members of the media, called for mandatory training about sexual assault and domestic abuse for all pastors and Southern Baptist seminaries.

Ginny Dodson, a former Southern Baptist who traveled 30 miles from Highland Village to attend the rally, said she thinks recent negative publicity could now prompt real changes. Dodson said her former church’s leadership told her to stay put in her marriage as she endured an abusive situation for two decades. She said she was told to “meet his sexual needs, make sure dinner was cooked properly, make sure I was doing all my wifely duties because if he had any reason to abuse, it was because I wasn’t doing my job.”

Asked about the possibility of mandatory training and a database shortly after his election as SBC president Tuesday, North Carolina megachurch pastor J.D. Greear said the “voluntary cooperation” of Southern Baptist churches would limit what could be required of them. But he said he is “very open to anything that can lead to a greater transparency and greater safety and that prioritizes the safety of the victim above everything.”

Greear also said he hopes to bridge what he considers to be a “gap of ignorance” within some congregations.

“There is an education problem in the Southern Baptist churches, I think, on this because
not everybody understands the laws,” he said. 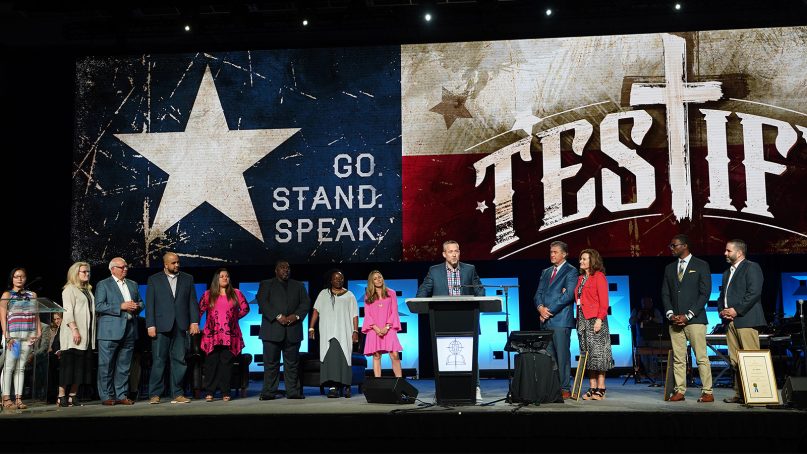 J.D. Greear, center, newly elected president of the Southern Baptist Convention, accepts the gavel from outgoing SBC President Steve Gaines as all newly elected officers and their spouses, left, are recognized on stage during the closing of the 2018 SBC annual meeting in Dallas on June 13, 2018. Gaines will preside over the 2019 meeting in Birmingham, Ala. Photo by Matt Miller via Baptist Press

First, others say, churches must understand the dimensions of the problem. On the day before the SBC meeting, Beth Moore, a prominent author and speaker, joined a pre-convention panel discussion in the convention center’s exhibit hall about abuse in the church. Speaking to a standing-room-only crowd, she recommended putting notices in bulletins and in church restrooms to let people know there’s help for them if they are in crisis. Like Greear, she said education about reporting abuse is necessary.

“There is a long, long shot of difference between sexual immorality and sexual criminality
that we have got to get straight,” said Moore, herself a sex abuse survivor. “Both are sin. Both demand repentance in order to be restored. But one calls the police.”

Steps away, at a booth for MinistrySafe, a company that provides background checks and other child protection services for churches, Olivia Mueller, a MinistrySafe staffer, said she had received hundreds of visitors on the eve of the SBC meeting.

“A lot of questions pertain to when to report, whether an incident is a reportable incident,” she said. “The attorneys almost always say, ‘When in doubt, report.’”

Danny Akin, president of Southeastern Baptist Theological Seminary, where Patterson was president before moving to Southwestern, told messengers his school in Wake Forest, N.C., is committed to providing “the safest possible environment” for its students, “especially our women.” 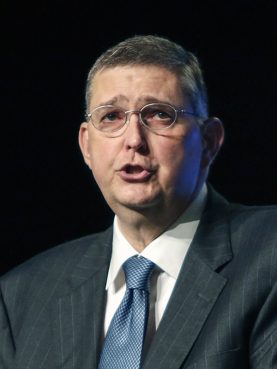 Jeffrey Bingham, interim president of Southwestern Baptist Theological Seminary, gives a report at the Southern Baptist Convention annual meeting on the last day of the two-day event in Dallas on June 13, 2018. Photo by Van Payne via Baptist Press

Jeffrey Bingham, who has succeeded Patterson as interim president at Southwestern, said he has instructed all his staff to retake and complete a sexual harassment course by July 31. The former dean of Southwestern’s School of Theology said he is also meeting with agencies and ministries that will aid the school in improving its response to abuse allegations.

“Let me state without any lack of clarity my intention, my priority is to create a safe environment and a campus culture that protects and cares for the victims of abuse,” he said, drawing applause from messengers.