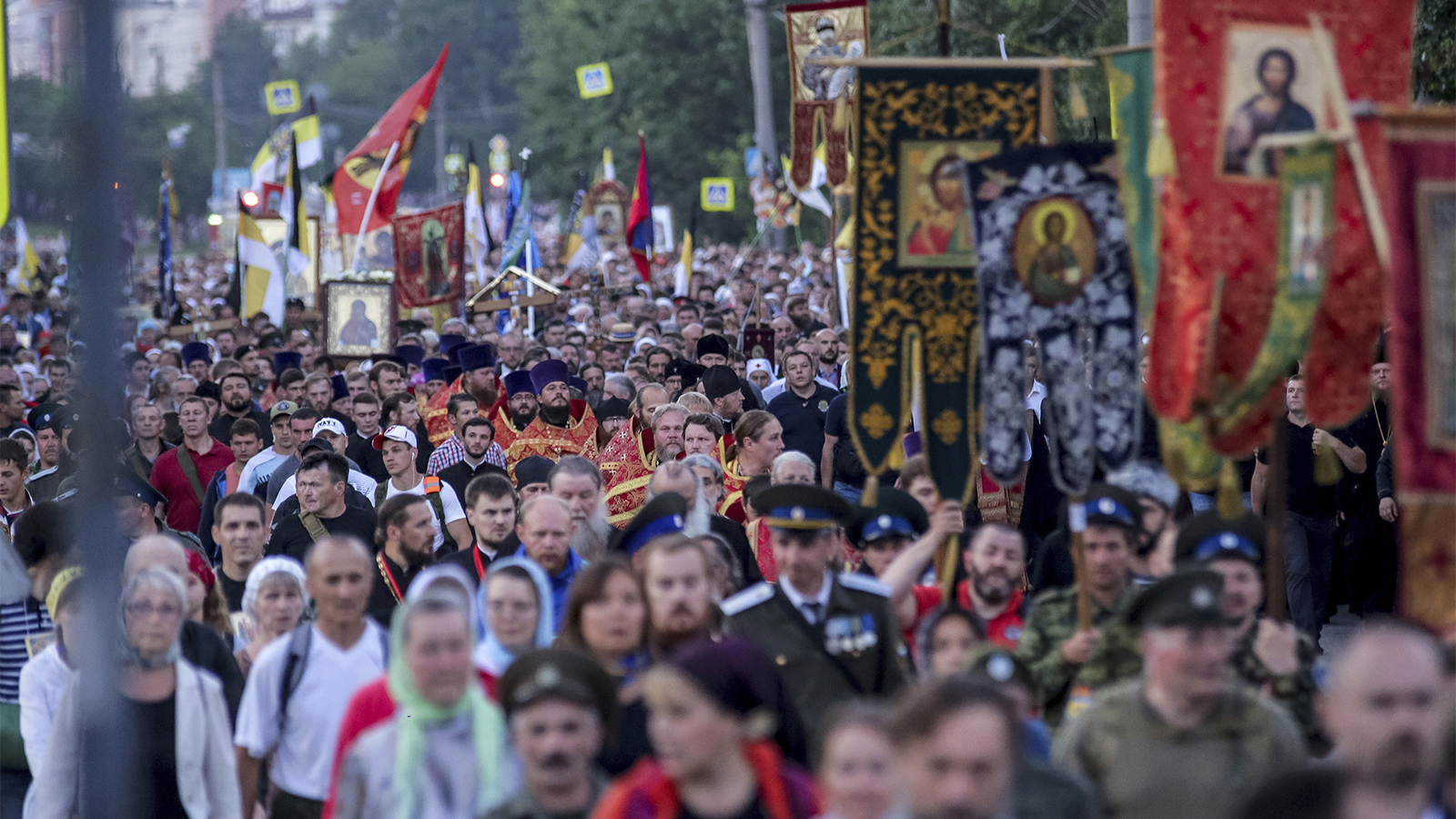 A walking procession starts from the Church on the Blood, which was built on the site of the Czar family execution, moves through the streets of Yekaterinburg, Russia, on July 17, 2018. Thousands of pilgrims participated in the procession marking the 100th anniversary of the execution of Czar Nicholas II and his family. (AP Photo/Aleksandr Abramenkov)
July 21, 2018
Kit Doyle

(RNS) — Each week Religion News Service presents a gallery of photos of religious expression around the world. This week’s gallery includes images from Russian and Indian processions, Israeli politics, the Thailand cave survivors, and more. In Yekaterinburg, Russia, a walking procession starts from the Church on the Blood, which was built on the site of the Czar family execution, and moves through the streets on July 17, 2018. Thousands of pilgrims participated in the procession marking the 100th anniversary of the execution of Czar Nicholas II and his family. (AP Photo/Aleksandr Abramenkov) 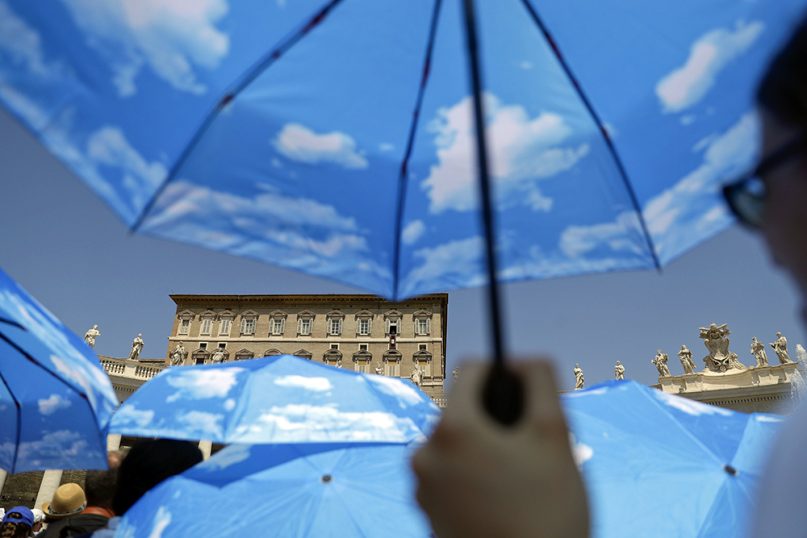 The Roman Catholic faithful use umbrellas to shelter from the sun as they listen to Pope Francis' message delivered from his studio window of the Apostolic palace during the Angelus noon prayer in St. Peter's Square at the Vatican, on July 15, 2018. (AP Photo/Gregorio Borgia) Kashmiri Shiite Muslim brides sit for a mass marriage event in Srinagar, Indian-controlled Kashmir, on July 15, 2018. Mass weddings in India are organized by social organizations to help poor families who cannot afford the costs of a ceremony as well as the customary dowry and expensive gifts that are still prevalent in many communities. (AP Photo/Mukhtar Khan) A student, who had taken refuge at the Jesus of Divine Mercy church amid a barrage of armed attacks, is embraced by a relative after he was transported to the Cathedral in Managua, Nicaragua, on July 14, 2018. Two students were reportedly killed in the confrontations. On Saturday morning, Cardinal Leopoldo Brenes negotiated with the president's office for the safe transfer of students out of the church and to the Metropolitan cathedral. (AP Photo/Cristobal Venegas)[/caption] Coach Ekkapol Janthawong, seated center, and members of the rescued soccer team attend a Buddhist ceremony that is believed to extend the lives of its attendees, as well as ridding them of dangers and misfortunes, in northern Thailand's Chiang Rai province on July 19, 2018. The 12 boys and their soccer coach, who were rescued from a cave in northern Thailand, left the hospital where they had been recuperating and appeared at a news conference Wednesday. They said the ordeal made them stronger and taught them not to live carelessly. (AP Photo/Sakchai Lalit) A relative of a soldier killed in the 1974 Turkish invasion of Cyprus lights a candle at a grave in the Tymvos Macedonitissas military cemetery during the 44th anniversary in the divided capital of Nicosia, Cyprus, on July 19, 2018. Greek and Cypriot soldiers were killed in 1974 during the Turkish invasion and subsequent occupation of the northern part of the island of Cyprus. Cyprus was split into Greek Cypriot south and Turkish Cypriot north in 1974 when Turkey invaded in response to a coup by supporters of union with Greece. (AP Photo/Petros Karadjias) 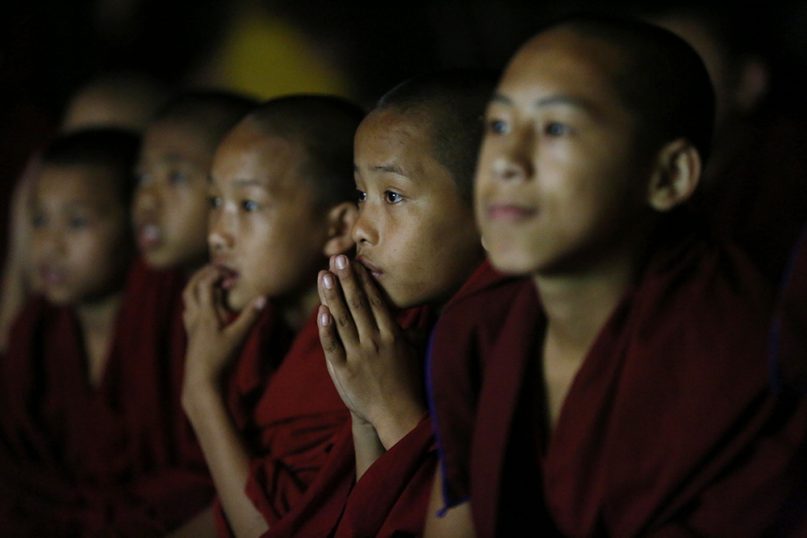 Young Tibetan Buddhist novice monks watch the final match of the 2018 World Cup between France and Croatia on television at a monastery in Kathmandu, Nepal, on July 15, 2018. (AP Photo/Niranjan Shrestha) Indian Hindu devotees participate in the annual festival of Rath Yatra, or chariot procession, in Ahmadabad, India, on July 14, 2018. Idols of the Hindu God Jagannath, his brother Balabhadra, and their sister Subhadra are taken out in a grand procession in specially made chariots called raths, which are pulled by thousands of devotees. (AP Photo/Ajit Solanki) A mirror reflects a Nepalese woman as she shops for beads on the first day of the Hindu holy month of Shrawan in Kathmandu, Nepal, on July 17, 2018. Unmarried Hindu women pray to Lord Shiva for a good husband, while married women pray for the welfare and longevity of their husbands. (AP Photo/NIranjan Shrestha) 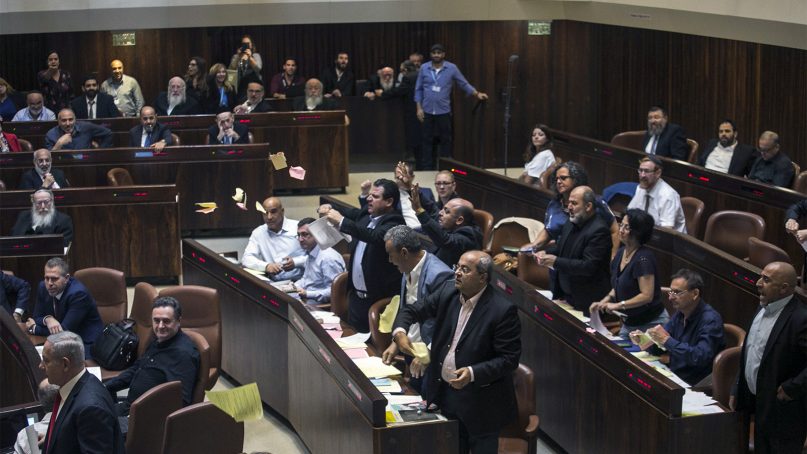 Arab lawmakers stand in protest during a Knesset session in Jerusalem on July 19, 2018. Israel's parliament approved controversial legislation on Thursday that defines the country as the nation-state of the Jewish people. Critics warn that the new law marginalizes minorities. (AP Photo/Olivier Fitoussi)