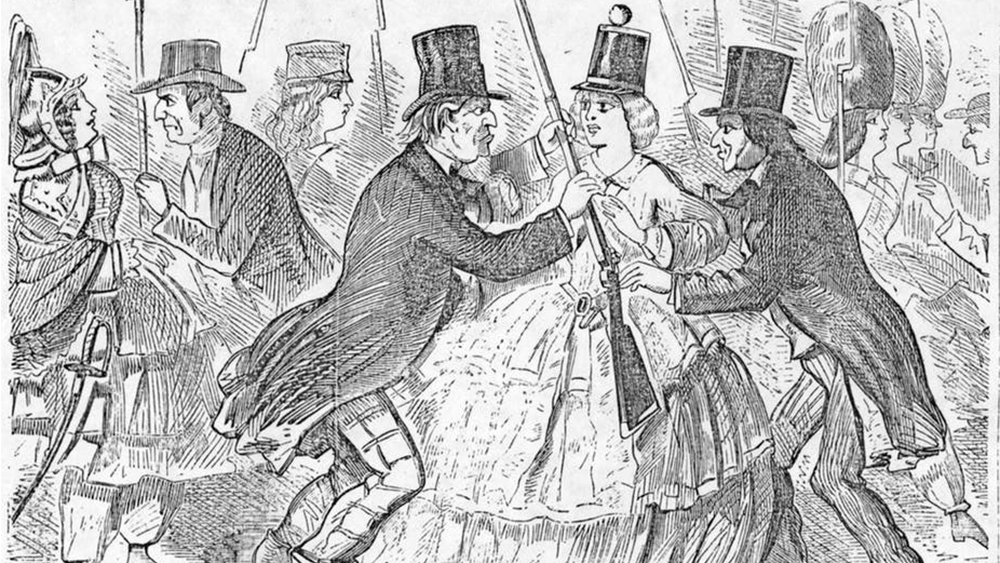 On July 24, 1847, Brigham Young and 146 other Mormon pioneers made their way into the Salt Lake Valley. They had left the United States and found themselves in Mexican territory.

At the time, the Mexican-American War was raging, and within a year Mexico would cede the Salt Lake Valley to the United States. But that was not in the Mormons’ plans. They were trying to leave the United States to escape violence and persecution.

But once they were in the new territory, they settled in the Valley without the approval of the Mexican government or the indigenous people who already lived in the arid land near the Great Salt Lake. The Mormon history in Utah reveals them to be both persecuted migrants and colonizers.

In Utah, July 24 is celebrated as Pioneer Day. From my perspective as a scholar of Mormon history, revisiting the story of the Mormon settlement of the Salt Lake Valley has profound implication for the ways the leadership of Church of Jesus Christ of Latter-day Saints today thinks about issues of immigration.

The history of Mormon immigration

Before they made their way to Salt Lake City, the Mormons lived in New York, Ohio, Missouri and Illinois. The church encouraged Mormon converts to gather together, and by the 1840s, some 25 percent of the population of the Mormon settlement in Illinois were British converts and immigrants.

The Mormons’ neighbors were suspicious of them for a number of reasons. They were perceived as outsiders because many were immigrants, but they were also clannish. In elections, the Mormons voted as a bloc. They tended to keep their trade and economic activity among themselves. As their numbers swelled into the hundreds and thousands, their neighbors feared their influence.

Similarly, their religious practices attracted suspicion. In the 1840s, the founder of Mormonism, Joseph Smith, began practicing polygamy, and though he tried to keep it secret, rumor quickly spread. As one Missouri writer described them in 1837, they were a “mass of human corruption, [a] tribe of locusts, that still threatens to scorch and wither the herbage of a fair and goodly portion of Missouri by the swarm of emigrants.”

Through the 1830s and 1840s, the Mormons fled from one state to the next. In 1838, the governor of Missouri issued what historians often call the “extermination order,” directing the state militia to drive Mormons out.

For several months Missourian forces and an ad hoc Mormon militia fought across several counties in the western portion of the state. By 1839, the Mormons had settled in Nauvoo, Illinois, hoping to escape such tensions.

But in June 1844, Joseph Smith was assassinated by a mob in Carthage, Illinois. His successor Brigham Young determined that the United States was not safe for the Mormons. He selected the Salt Lake Valley as the place for their settlement because, as Young said, it was “a place on this earth that nobody else wants.”

Mormonism as an immigrant religion

The Mormon leadership today remembers that they are historically a religion of immigrants. Indeed, the church in the United States still is. Mormonism is growing faster in Latin America than in any other region of the world, and nearly 10 percent of the church’s membership in the United States is Latino or Latina.

These reasons lie behind the church’s consistent support for a humane immigration policy. The church officially supports increasing opportunities for the “Dreamers,” people brought to the United States as children. It has offered criticism of the punitive practices the Trump administration has implemented toward migrant families.

Its leadership helped to draft the “Utah Compact,” a statement of principles that urges a “humane approach” to immigration that emphasizes the importance of being “a place that welcomes people of goodwill.” After all, as church leaders stated in an official statement, “Most of our early Church members emigrated from foreign lands to live, work and worship.”

At the same time, it is also true that the Trump administration’s immigration policies enjoy about 50 percent approval in Utah, a state that has about two million Mormons.

Indeed, recently President Trump nominated Ronald Mortensen to oversee the State Department’s refugee program. Mortensen, a Mormon and former officer in the U.S. foreign service, has blasted the Utah Compact and other of the church’s statements on immigration for being too favorable to immigrants.

Mortensen attacked the church for being “biased in favor of illegal immigrants,” and said its positions “weaken the rule of law.”

The disputed legacy of Mormon immigration

Mortensen’s stand reveals the divided mind of the church. Though its leadership remembers Brigham Young’s entrance into the Salt Lake Valley as a reason for sympathy to immigrants today, Mortensen’s hard line brings to mind a different aspect of Mormon history.

Despite Brigham Young’s claim that nobody else wanted the valley, it was indeed populated by thousands of Native Americans when the Mormons arrived. Mormon-Native interaction was uneasy, characterized by alternating cooperation and spurts of violence.

Though Brigham Young sometimes sought to work peacefully with Native tribes, he was also willing to enforce his will upon them with violence. Mormon settlers gradually displaced Native Americans from the land and resources they depended upon to support themselves.

In consequence, wars between the Mormon settlers and Native peoples broke out in the 1850s and 1860s. As with most other areas in the United States, Native people were eventually confined to reservations.

Aspects of this legacy persist. Recently, for instance, Mormon elected officials have supported the Trump administration’s decision to reduce the size of the Bears Ears National Monument in southern Utah. The monument was created by President Barack Obama in 2016. It is centered on a pair of large buttes called the “Bears Ears,” which are held as sacred or significant by a number of Native American groups. Many Native leaders therefore protested the Trump administration’s plan and Utah leaders’ support for it.

The conflicts over Bears Ears on the one hand and recent immigration policy on the other show that the church’s own experience as a migrating people, but also as a colonizing people, oppressed and oppressor in turn, continues to shape the church’s position on immigration today.

(Matthew Bowman is an associate professor of history at Henderson State University.)