Bobby Gruenewald, right, innovation leader for Life Church, founder of the YouVersion Bible app, works with his team in Edmond, Okla., on June 26, 2018. Celebrating its 10th anniversary, the app has been downloaded on 330 million devices and in every country in the world, according to the church. Photo courtesy of Life Church
July 26, 2018
Bobby Ross Jr.

EDMOND, Okla. (RNS) — A high-tech Bible in your pocket?

In 2018, it’s a reality for hundreds of millions of smartphone users around the world.

But a decade ago, when leaders of Oklahoma-based Life Church developed the popular YouVersion app, the concept was new.

“We just thought, ‘What if the Bible could be among the very first group of apps?’” said Bobby Gruenewald, pastor and innovation leader for the multisite evangelical church, which each week draws roughly 75,000 worshippers to 29 locations in nine states.

“It was profound how simple it was yet how well it connected us to God’s Word in places and environments where we didn’t have physical Bibles,” added Gruenewald, a onetime technology entrepreneur who entered full-time ministry in 2001.

When Apple launched its app store 10 years ago this month, YouVersion was one of the first 200 free apps available — and the only Bible app.

“That first weekend, from Thursday to Sunday, we saw 83,000 people install it on their iPhone, and it blew our minds,” Gruenewald said. “We had no idea that was possible.”

That was only the beginning. 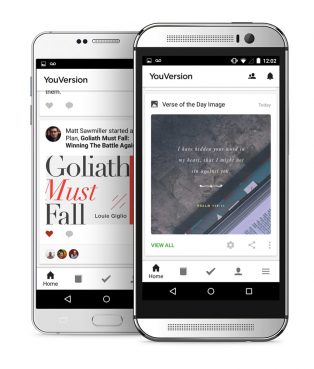 Views of the YouVersion app open on smartphones. Image courtesy of Life Church

Since then, YouVersion been downloaded on more than 330 million devices and in every country in the world, according to Life Church, which is a part of the Evangelical Covenant Church denomination.

“Indeed, YouVersion is the 300-million-pound gorilla of Bible apps,” said Thumma, director of the Hartford Institute for Religion Research in Connecticut. “It is true there are many others now, but YouVersion was the early front-runner and has continued to improve and offer features that make it the best and by far most often downloaded worldwide.”

At the beginning, YouVersion offered the Bible in 15 versions and two languages.

Through partnerships with publishers and Bible societies, those numbers have expanded to 1,700 versions and 1,200 languages.

In the shadow of a massive white cross that overlooks Interstate 35 in the city of Edmond, 32 Life Church employees — bolstered by 1,000 volunteers around the world — work full time with YouVersion. Tech support is offered in more than a dozen languages.

“The volunteers translate the buttons and interface work. They speak at least 50 languages because every time we add a new feature, it has to be translated into 50-plus languages so that the interface of the app is intact,” said Gruenewald in his newly built facility, where meeting rooms have glass doors and giant monitors and verses from the Scriptures are painted prominently on the walls.

YouVersion — the first option that shows up in an App Store search for “Bible” — remains free with no commercial advertisements. 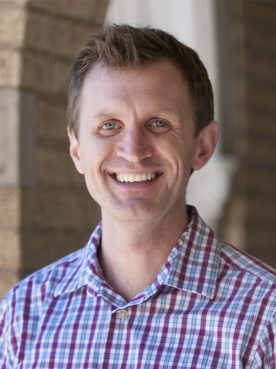 “When I ask a group of people about their overall digital experience, they often talk about how when they are at work or at school, they use their computer to come up with (Bible) things,” said John Dyer, who teaches a course on theology, technology and digital culture at Dallas Theological Seminary. “So in that world, they’re going to be exposed to something other than YouVersion.

“YouVersion is going to primarily be an app on their phone, and that’s something worth mentioning in the whole digital realm,” added Dyer.

An $8.3 million annual budget, funded by Life Church members’ tithes and outside donations, pays for YouVersion. Benefactors support a mission to reach as many people as possible through their phones and introduce them to Jesus.

The church never has had to hire a development person to raise funds for YouVersion, Gruenewald said, “because God has always provided the amount we need each year."

“There are people from our own church who are surprised sometimes when they learn the app is put out by their own church,” Gruenewald said. “It’s a missional output of our church, but we’re not trying to boost our church attendance numbers from it.”

Laura Wasson Warfel is a member of Living Springs Community Church, a Reformed Church in America congregation in Glenwood, Ill.

Warfel said she switches between her printed Good News Bible and the YouVersion app, where she favors the New Living Translation.

“I use YouVersion all the time,” said Warfel, who is in her 60s. “I love the search feature. That’s probably my favorite part.

“I also love the Verse of the Day,” she added. “I have that set up as a reminder to come on before I even wake up in the morning. … And I also like the verse images, and I will share those periodically on my social media.” 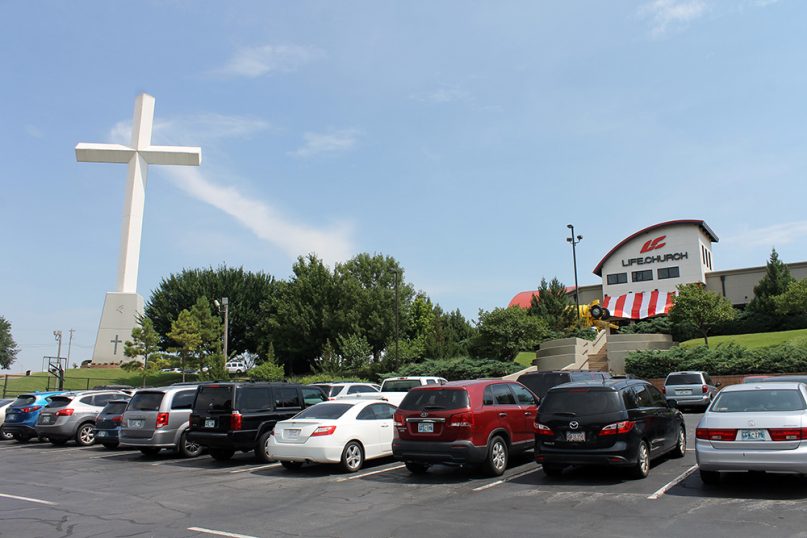 Drivers headed north on Interstate 35 can't miss the massive white cross at the Life Church campus in Edmond, Okla. The multisite evangelical church, which each weekend draws 75,000 worshippers to 29 locations in nine states, has an $8.3 million annual budget for the YouVersion app, a ministry of the church. RNS photo by Bobby Ross Jr.

David Regier, minister of music for the First Baptist Church of San Jacinto, Calif., said he enjoys the ability to scroll through Scriptures on his phone, but he prefers a paper Bible for church and study.

“The obvious downside (of an app) is that it’s not just a Bible, so there is the ever-present temptation of — gasp! — Twitter at a touch of a screen,” said Regier, 51, whose alter ego is the Church Curmudgeon, a cranky old believer with nearly 100,000 Twitter followers. “And actually flipping around in a paper Bible helps secure Bible knowledge in the brain.”

Regier said he has YouVersion installed on his phone, but he primarily uses the ESV Bible app and the NASB Bible+ app.

“I’m old-fashioned enough to want to have fewer bells and whistles on my programs,” he said, “so I don’t get distracted from the Bible while I’m reading it.”

Nationally, the use of technology to read the Bible has grown steadily, according to the 2018 State of the Bible survey, conducted by the Barna Group in partnership with the American Bible Society.

About 42 percent of Americans who read, listen to or pray with the Bible on their own have a Bible app on their phones, the survey found.

Still, 89 percent of Bible users say that a print version remains appealing to them, Barna reported. 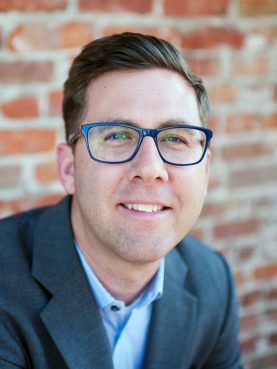 However, he explained: “A lot of times, it’s a both/and situation — so it’s not that print is being replaced or that digital is not being used. It’s just that they’re adding digital usage along with their print usage of the Bible.”

But while overall Bible reading has remained steady, Kinnaman said, the digital availability of the Scriptures “doesn’t seem to be making significant inroads with people who were previously unreached.”

“I think the future is going to be churches helping people realize that it’s a lot more than just having access to Scriptures,” Kinnaman said. “But it’s also about how do we apply principles and understand what it means for us to live with discernment in this digital Babylon.”

Next in the works: YouVersion plans to launch Bible Lens, an app that will analyze the objects in a photo and detect biblical themes to suggest the Bible verse that best fits the photo.

“We’re really excited about it because it’s unique and on the front edge of where technology is today,” Gruenewald said. “The purpose is really to try to help people see Scripture connection in their everyday life.

“They’ll have a lens through which to look at the world around them and say, ‘I never thought about how Scripture connects to that place, that moment, that situation.’”