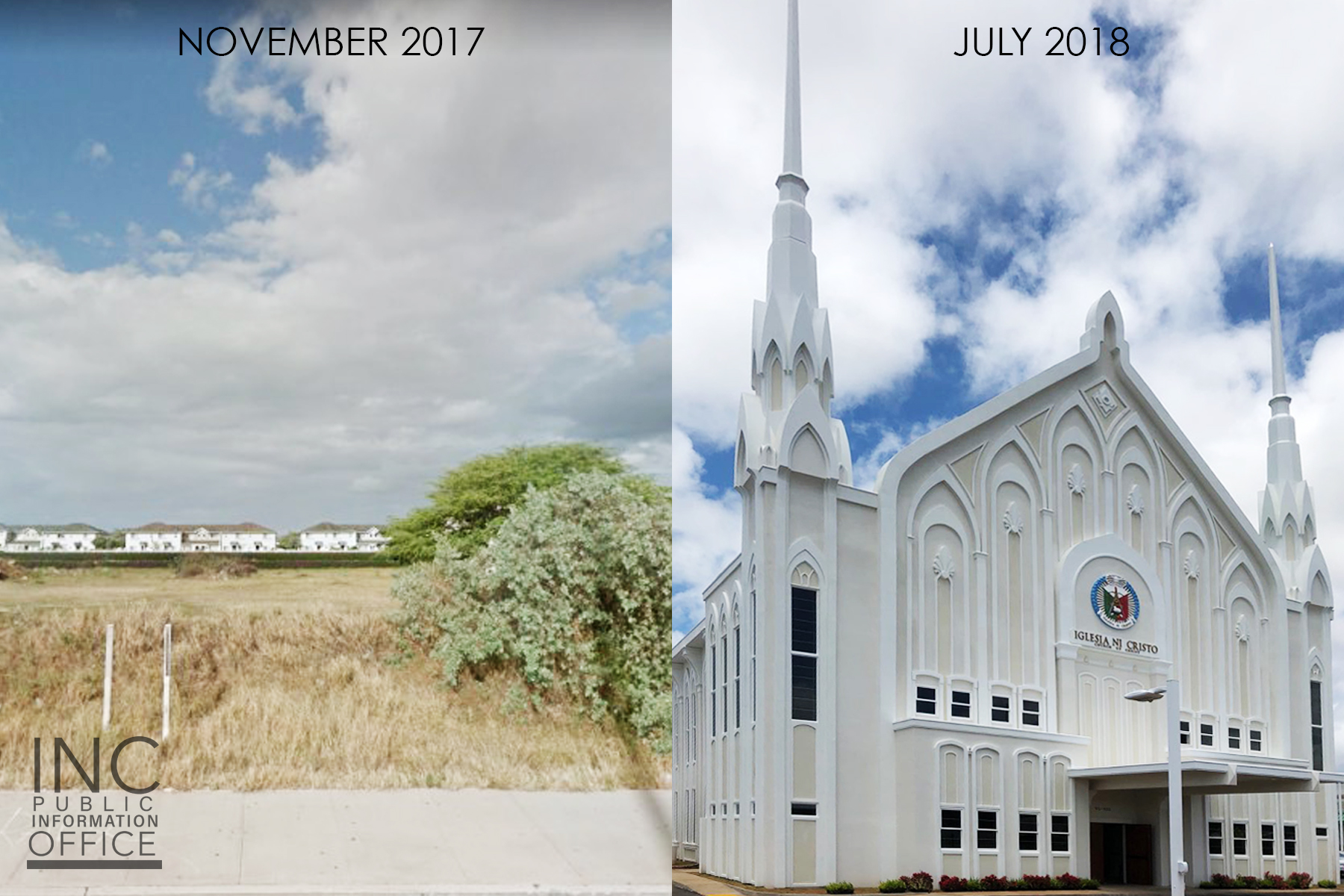 HONOLULU – The Iglesia Ni Cristo (or Church Of Christ) , an international Church that was first registered in the Philippines, will celebrate its 104th anniversary and its 50th year in the West, on Friday, July 27, with the dedication of a new House of Worship in Ewa Beach in Hawaii to be officiated by the Church’s Executive Minister Brother Eduardo V. Manalo.

The dedication of the 810-seater house of worship in Ewa Beach is particularly significant as this was where the first local congregation of the INC, outside of the Philippines, was established 50 years ago, particularly on July 27, 1968.

The steel and concrete structure is built on a three-acre property on Fort Weaver Rd., Ewa Beach, Oahu. The Church Of Christ purchased the property in 2011 from the Calvary Baptist Church, and subsequently built the house of worship from the ground up, becoming the largest INC house of worship constructed outside of the Philippines, with an architectural style unique to the INC chapels.

It was in Ewa Beach that the INC held its first worship service outside of the Philippines on July 27, 1968. This was officiated by the late Executive Minister Erano G. Manalo, the father of the current Executive Minister, Brother Eduardo.

Soon after, the INC also established another local congregation in San Francisco, California. Since that time, the INC now has around 7,000 local congregations spread in 143 countries; its membership consisting of 133 ethnic groups and nationalities.

Hawaii officials also recognized the importance of the INC or Church Of Christ. "I know what the Church (of Christ) does, not just for its members but also for our community as a whole. I've always said one of our greatest assets in our community is our churches," Honolulu City Council Chair Ernie Martin emphasized recently during an Appreciation Day visit to public officials at City Hall.

Having personally participated in or witnessed the Church's recent outreach efforts, the Council Presiding Officer who also represents Oahu Island's North Shore, also acknowledged the impact that Church of Christ members have made throughout Oahu and even the entire state. "I've been there for the blood drive. I and my wife actually went to (the) Waipahu church (congregation)," he said.

"I know also of the clothing drive as well, to help the less fortunate in our community, and a lot of other works that the Church has done not necessarily as a group effort but even just the individual members in terms of a giving heart. All of us are very appreciative of it."

Earlier this year, the city council of Honolulu also presented the Church Of Christ with a certificate of recognition for its extensive and dedicated public service in Hawaii and throughout the world. “It was an honor for the council members to honor the Iglesia Ni Cristo and the many efforts the Church has done for members throughout our city,” said Heidi Tsuneyoshi, Senior Advisor of Honolulu Council Members.

“The more that [the Church] grows, the better for the state, (and) the better for society as a whole,” said Hawaii State Senator Will Espero. “It’s providing an opportunity for our many individuals who may not have that opportunity to be part of a church or a family, and this is a way that the Church can grow here in Hawaii and continue its mission in serving Christ,” he added.

Since July 1968, there are now 23 local congregations across the state of Hawai’i and the U.S. territory of American Samoa. In 2018, seven more local congregations were established in Hawaii, namely Kalihi, Waimanalo, Pearl City, Kunia, Hilo, Kihei and North Shore.

On the 50th anniversary of its expansion into the Western world, the Church will also hold a world-class musical depicting the Church’s history over the last 104 years, and progress in the West, at the Honolulu Blaisdell Arena. Members of the Church from around the world will be traveling to the area to join the celebrations.

About the Iglesia Ni Cristo (INC) or Church Of Christ
The Iglesia Ni Cristo (INC) or Church Of Christ is a global Christian Church that upholds Bible-based Christian teachings. It maintains 7,000 local congregations and missions in 143 countries and territories and its membership consists of 133 ethnic groups and nationalities. The INC continues to fulfill its pledge of sharing the gospel and extending help, to the best of its ability, to strengthen the bond between the congregations of the Church Of Christ and the communities in which they serve – through aid and services, promoting education, socio-economic well-being, environmental awareness and health improvement. This is done with the help of local governments and community establishments, through the Aid For Humanity Program of the Felix Y. Manalo (FYM) Foundation and also the worldwide volunteer force of the INC Giving Project . [www.iglesianicristo.net]