(RNS) — To the World Relief volunteers in a mobile welcome center parked outside the Northwest Detention Center in Tacoma, Wash., it was clear that the woman released from the center moments before had been separated from her children while seeking asylum at the United States border with Mexico.

The woman, called “Karla” to protect her identity, was smiling as she got into a car with Robin Jacobson, a board member with Advocates for Immigrants in Detention Northwest, which runs the welcome center.

But as soon as the car door closed, Karla burst into tears.

In the short drive to Jacobson’s home, it all spilled out, with help from the Google Translate app: how Karla and her family had fled gang violence in El Salvador, how she’d been separated from her two daughters, how the 6-year-old hadn’t wanted to let go, how Karla hadn’t known where her 13-year-old was for 25 days, how the time spent in detention was marked by “unexpected suffering.”

Now Karla had a plane ticket to reunite with her family the next day in California, where she would stay while her case is pending.

Jacobson volunteers with a team from her church, hosting people coming out of detention through World Relief. After Karla had a night’s sleep, Jacobson drove her to the airport, something Jacobson said “was probably more transformative and meaningful for us and our family than it was for her.”

“For us to be able to share in … a joyous part of her journey allowed a moment of relief for us in what can seem like unrelenting bad news,” she said.

Providing support to families like Karla’s is one way faith-based agencies that normally perform the more orderly task of welcoming refugees got involved in the chaotic crisis at the border.

As the number of refugees admitted into the U.S. has dropped dramatically — the Trump administration reportedly is considering lowering the 2019 limit on refugees entering the country to 25,000 after cutting it from 110,000 to 45,000 this year — these groups “continue to find ways to be available to those who need us the most,” said Erol Kekic, senior vice president of Church World Service.

“We frequently tell the government we’ve been doing this work since before they were involved. We’ll continue to do the work,” Kekic said. “For us, it’s really about our calling to help others in need.”

Two of those agencies — Lutheran Immigration and Refugee Service and the USCCB — were instrumental in caring for children separated from their parents after the Trump administration’s “zero tolerance” policy was announced in May.

“For us, honestly, the dust is still settling,” said Kay Bellor, vice president for programs at LIRS.

Of 62 children ages 5 to 17 placed in transitional foster care with Lutheran Immigration and Refugee Service, 85 percent had been reunited with a parent by July 26, the deadline set by a federal judge for the U.S. government to reunite more than 2,500 children with their families (a higher success rate than the government’s). The deadline for reunification for more than 100 children under age 5 passed earlier in July. 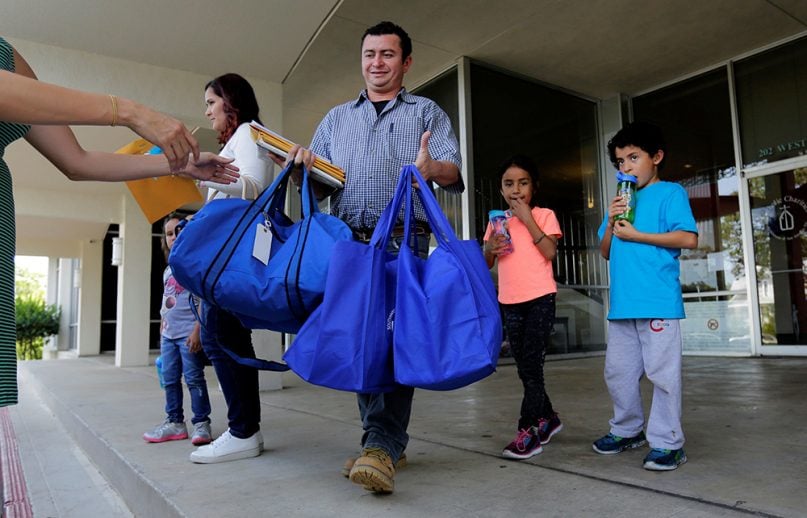 Immigrants from Honduras, Gerarado Reconco Lara, center, with his children Maria, 6, and Gerardo, 8, leave a Catholic Charities facility July 23, 2018, in San Antonio. The family was reunited the night before. (AP Photo/Eric Gay)

The agencies have offered similar care for unaccompanied children under several administrations. But Nathan Bult, director of governmental affairs at Bethany Christian Services, a Michigan agency that contracts with Lutheran Immigration and Refugee Service, said, “We’ve never seen anything like what’s been happening over the last couple of months.”

The faith-based agencies are concerned that the executive order President Trump signed in June that stopped the mass separations won’t end them altogether and that children are still being detained, even with their families.

Though the executive order continues the zero tolerance policy, and “family unity must be maintained, and child safety and welfare is paramount,” a U.S. Customs and Border Protection spokesperson told Religion News Service, there still are instances when a child can be separated from a parent or an adult for his or her safety. Those include cases when the parent presents a danger to the child, has a criminal history or outstanding warrant, is participating in a criminal activity at the time of entry or has a communicable disease. They also can be separated if the adult falsely claims to be a parent or guardian.

At first, the agencies didn’t realize the children they were receiving were any different from the unaccompanied children they had cared for under past administrations. Figuring out they had been separated from their parents at the border under the zero tolerance policy took some “investigative work,” according to Bult.

Once the agencies located parents in a detention center, caseworkers traveled with the child to be reunited. Even then, the conditions of those reunions were beyond the caseworkers’ control, and cause for concern. 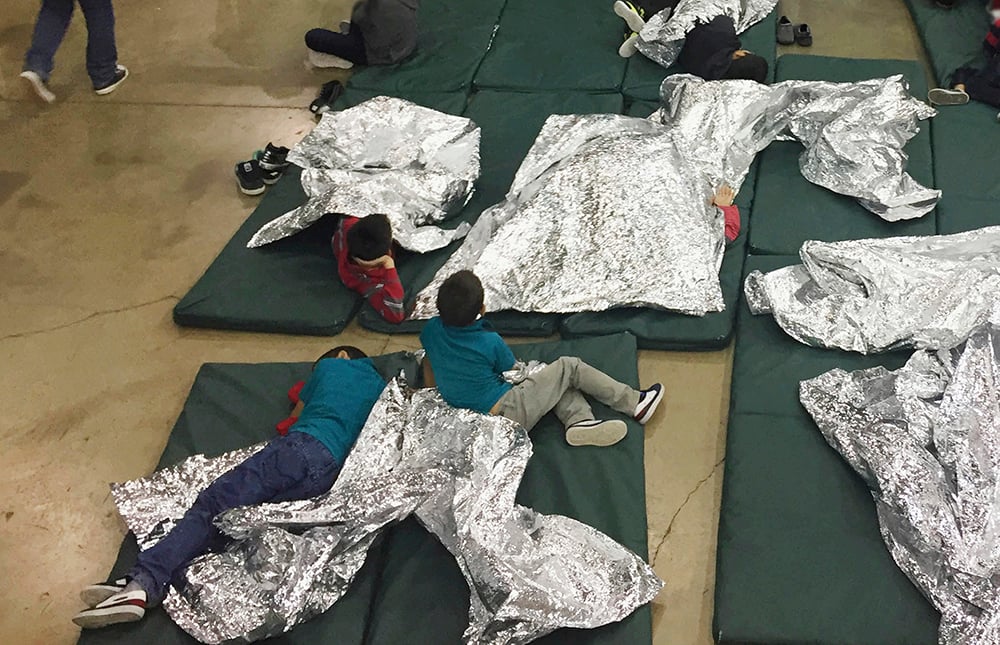 Immigrant children in custody related to cases of illegal entry into the United States rest in one of the cages at a detention facility in McAllen, Texas, on June 17, 2018. Immigrant children described hunger, cold and fear in a voluminous court filing about the facilities where they were held in the days after crossing the border. (U.S. Customs and Border Protection’s Rio Grande Valley Sector via AP)

Some children were flying cross-country at night. Others were parked in rental cars for hours, or arriving at detention centers that weren’t ready for them. Bult said Bethany workers had heard “pretty horrific stories” about children spending the night alone in those centers.

The USCCB had served about 500 families with children over age 5 at Catholic-affiliated reception centers across Texas in El Paso, McAllen and San Antonio by the reunification deadline, according to Ashley Feasley, director of policy for the U.S. Conference of Catholic Bishops’ Migration and Refugee Services. At least one Catholic reception center still was receiving a handful of families considered reunited days after the deadline.

Altogether, Lutheran Immigration and Refugee Service helped about 200 families at its Phoenix center, then set up another virtually overnight in Albuquerque, N.M., to take in an additional 30 families.

In addition to providing clothing and shelter, those centers helped families connect with services that can help them comply with asylum and immigration proceedings.

“People are simply confused, and I don’t blame them because things do change daily,” said Kekic of Church World Service.

Now that the separations largely have ended, there is a “great need for additional services,” he said, including help navigating legal proceedings or finding family in the U.S. or abroad, as well as medical assistance.

HIAS is focusing its efforts on providing legal aid to families, according to president and CEO Mark Hetfield.

The U.S. asylum system hasn’t had enough resources for some time, Hetfield said, and if there’s a silver lining to the situation, it’s that it has “reawakened the American Jewish community.”

Bult said he still has a lot of questions. The government has said the 711 children who had not been reunited with family by the July 26 deadline have been deemed “ineligible,” mostly because their parents waived reunification rights or have not yet been found.

But that’s according to the federal government, Bult said. He is concerned that federal officials are “determining which parents are fit to parent their own children after they had their children forcibly removed by the U.S. government.”

Some parents in countries such as Guatemala, El Salvador and Honduras have asked caseworkers not to send teenage children back because it’s not safe, he said. 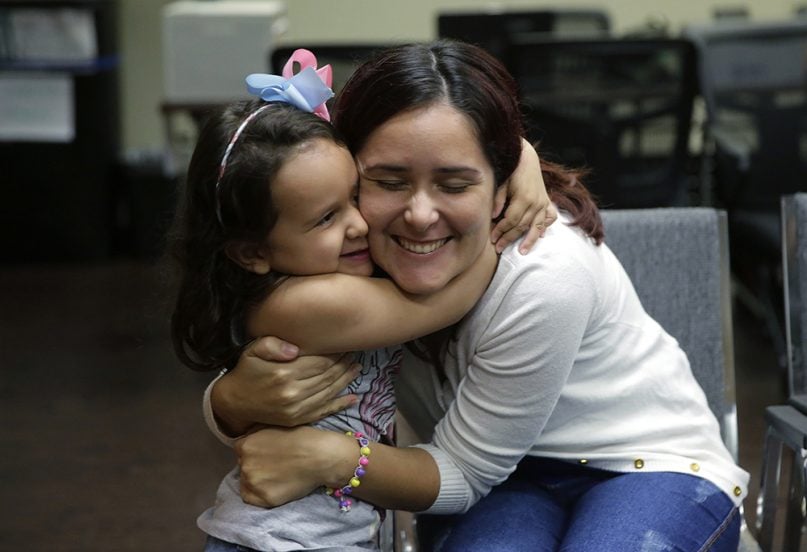 Immigrants seeking asylum from Brazil Natalia Oliveira da Silva and her daughter, Sara, 5, hug as they wait at a Catholic Charities facility after being reunited in San Antonio on July 23, 2018. Since their separation in late May, the daughter had been at a shelter for immigrant minors in Chicago, while Oliveira was taken to various facilities across Texas. (AP Photo/Eric Gay)

But most do want to be reunited in their home countries, he said, and that’s “not going to happen quickly.”  At least three federal agencies — the Department of Homeland Security, the State Department, the Department of Health and Human Services — and the judiciary need to coordinate with several foreign governments in what Bult calls “a very bureaucratic process.”

“It’s important to look at the conditions they are fleeing from,” he said. “Ninety-five percent of them are coming from three countries: Guatemala, Honduras and El Salvador — three countries that rank first, third and fourth in the world for child murder rates. So many of these families and children are truly fleeing for their lives.

“It’s important they are treated as refugees and asylum-seekers.”

Their interest in refugee work is what got the six faith-based refugee resettlement agencies involved in the family separation crisis in the first place.

The two aren’t unrelated, according to Matthew Soerens, U.S. director of church mobilization at World Relief. 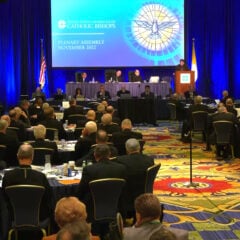