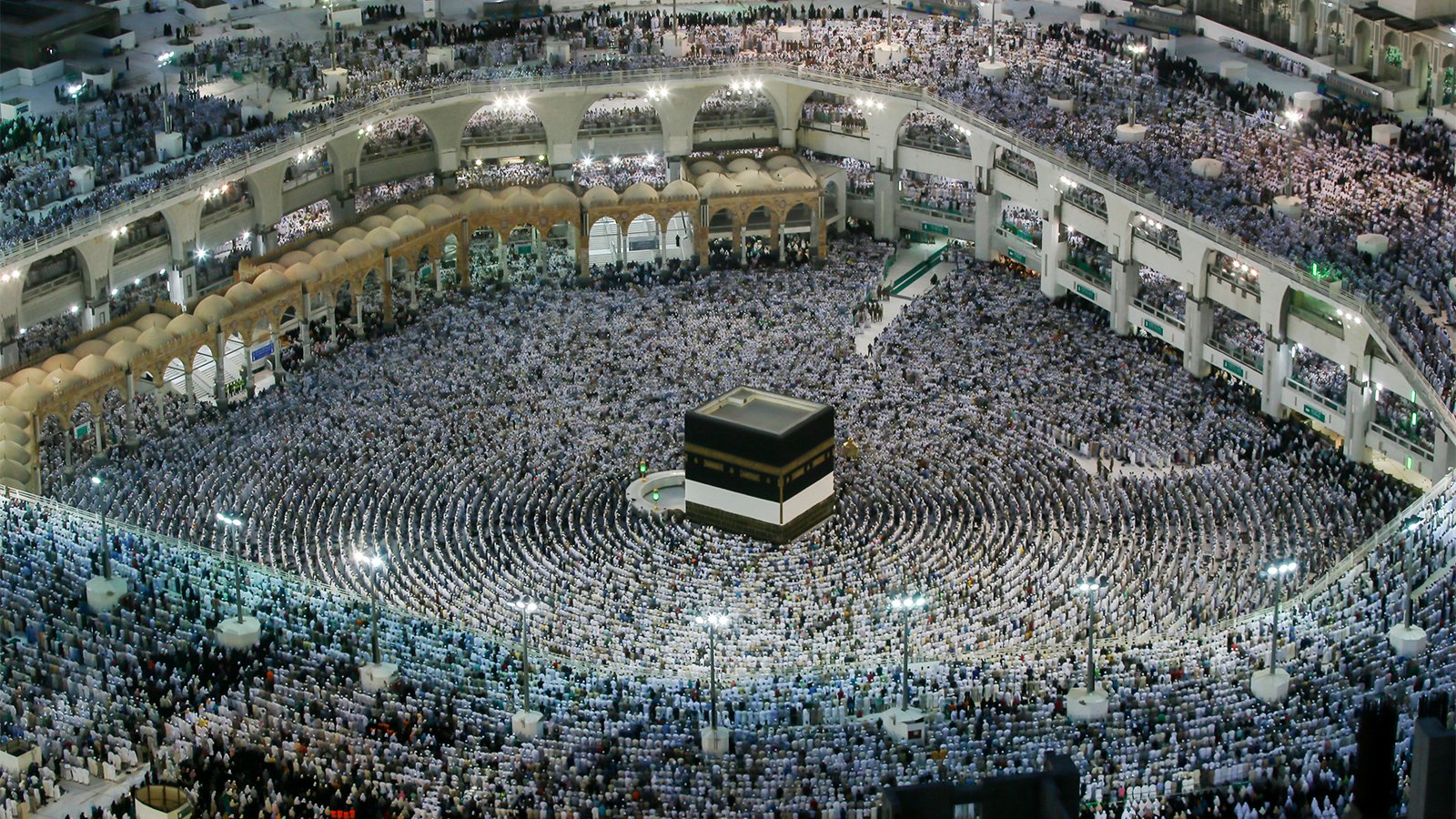 Muslim pilgrims pray around the Kaaba at the Grand Mosque, ahead of the annual Hajj pilgrimage in the Muslim holy city of Mecca, Saudi Arabia, on Aug. 16, 2018. The Islamic pilgrimage draws millions of visitors each year, making it the largest annual gathering of people in the world. (AP Photo/Dar Yasin)
August 17, 2018
Ken Chitwood

Nearly 2 million Muslim pilgrims are gathering in the holy city of Mecca in Saudi Arabia for the Hajj. This five-day pilgrimage is a once-in-a-lifetime obligation for all Muslims who have the physical and financial ability to undertake the journey.

What is the religious and political significance of this annual pilgrimage?

Millions of Muslims come from countries as diverse as Indonesia, Russia, India, Cuba, Fiji, the United States and Nigeria – all dressed in plain white garments. Men wear seamless, unstitched clothing, and women, white dresses with headscarves. The idea is to dress plainly so as to mask any differences in wealth and status.

The pilgrimage is considered to be the fifth pillar of Islamic practice. The other four are the profession of faith, five daily prayers, charity and the fast of Ramadan.

The first day of the Hajj

The rites of the Hajj are believed to retrace events from the lives of prominent prophets such as Ibrahim and Ismail.

Pilgrims start by circling the “Holy Kaaba,” the black, cube-shaped house of God, at the center of the most sacred mosque in Mecca, seven times. The Kaaba occupies a central place in the lives of Muslims. Muslims, all over the world, are expected to turn toward the Kaaba when performing their daily prayers.

The Quran tells the story of Ibrahim, who when commanded by God, agreed to sacrifice his son, Ismail. Muslims believe the Kaaba holds the black stone upon which Ibrahim was to carry out his oath.

Pilgrims are bound by specific rules regarding going around the Kaaba. They may kiss, touch or approach the Kaaba during the pilgrimage as a sign of their devotion.

In performing these rituals, they join a long line of pilgrims to Mecca – including Prophet Muhammad, who circled the Kaaba.

Pilgrims then proceed to a ritual walk – about 100 meters from the Kaaba – to hills known as “Safa” and “Marwah.” Here they re-create another significant event recorded in the Quran.

The story goes that Ibrahim was granted a son by God through his Egyptian slave girl Hajar. After the birth of Ismail, God instructed Ibrahim to take Hajar and her newborn son out into the desert and leave them there. Ibrahim left them near the present-day location of the Kaaba. Ismail cried out with thirst and Hajar ran between two hills, looking for water until she turned to God for help.

God rewarded Hajar for her patience and sent his angel Jibreel to reveal a spring, which today is known as “Zamzam Well.” Pilgrims drink water from the sacred well and may take some home for blessings.

The second day of the hajj Pilgrims pray on Arafat in 2009. Photo by Omar Chatriwala/Creative Commons

The hajj “climaxes” with a sojourn in the plains of Arafat near Mecca. There, pilgrims gather in tents, spend time with one another and perform prayers. Some pilgrims will ascend a hill known as the “Mount of Mercy,” where Prophet Muhammad delivered the farewell sermon toward the end of his life.

They then proceed to an open plain near Mecca, often a highlight of the journey for many pilgrims. Muslims believe that the spirit of God comes closer to Earth in this place at the time of the pilgrimage.

As a scholar of global Islam, during my fieldwork I have interviewed those who have gone on the Hajj. They have described to me their personal experiences of standing in the plains of Arafat or circling the Kaaba with fellow Muslims and feeling a close communion with God.

Afterwards, pilgrims move to Mina, also known as the Tent City where more than 100,000 tents house the millions of pilgrims about 5 kilometers from the holy city of Mecca.

Here they recall how Satan tried to tempt Ibrahim to disobey God’s call to sacrifice Ismail. Ibrahim, however, remained unmoved and informed Ismail, who was willing to be offered to God. To reenact Ibrahim’s rebuff of Satan’s temptation, pilgrims throw small stones at a stone pillar.

They then proceed to follow Ibrahim in the act of sacrifice. The Quran says just as Ibrahim attempted to kill his son, God intervened and a ram was killed in place of Ismail. In remembrance, Muslims all over the world ritually slaughter an animal on this day. The “festival of the sacrifice” is known as Eid al-Adha. Pilgrims stone the devil in Mina in 2009. Photo by Omar Chatriwala/Creative Commons

Many pilgrims spend the next few days in Mina, where they repeat some of the rituals. It is where they start to transition to their worldly life by putting on their everyday clothes.

Of course, the pilgrimage does not take place in a political void. The Hajj is a massive organizational project for the Saudi authorities. Issues concerning crowd management, security, traffic and tensions constantly plague the successful organization of the event. A tragic stampede in 2015 left over 700 dead. Since then Saudi authorities review preparations even more carefully.

There are other tensions too that come up at this time: Some Shia governments such as Iran, for example, have leveled charges alleging discrimination by Sunni Saudi authorities.

This year, Muslims from Canada are concerned about logistics traveling back from the Hajj. Saudi Arabia has suspended all direct flights to Canada in a diplomatic feud sparked by tweets related to the Kingdom’s human rights violations.

To address such issues, Muslims in the past have called to put together an international, multi-partisan committee to organize the pilgrimage.
Perhaps that could help avoid regional or sectarian conflicts. The Hajj, after all, is any individual Muslim’s single most symbolic ritual act that reflects the ideal of unity.

By requiring Muslims to don the same clothes, pray in the same space and perform the same rituals, the Hajj has the potential to unite a global Muslim community across national and class boundaries.

This is an updated version of an article originally published on Aug. 31, 2017.

(Ken Chitwood is a Ph.D. Candidate in Religion in the Americas, Global Islam at the University of Florida.)