KISUMU, Kenya (RNS) – The Legio Maria Mass at Ephesus Church on a recent Sunday morning featured Prophet Moses Otieno singing hymns and reciting the rosary before an altar adorned with pictures of Jesus, Mary and church founder Simeo Ondeto and his mother, Maria.

Then Otieno began to speak in tongues and cast out demons as congregants wailed, spun and fell to the floor.

“I can see in the spirit women here are barren,” Otieno declared. “Rush to the altar and get a miracle. Today you are going to receive babies. I have been sent by the Messiah through visions to deliver barren women today.” 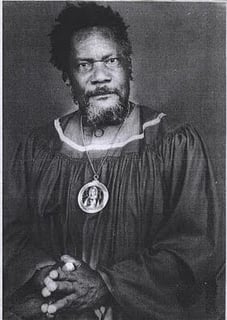 The Legio Maria movement (Latin for “Legion of Mary”) sprouted in western Kenya in the 1960s after Ondeto, his mother and other members were excommunicated from the Roman Catholic Church for practicing exorcism.

Ondeto, who died in 1992, is now believed to be the Messiah. Specifically, Legio Maria adherents believe Jesus and Ondeto are the same person who has appeared in different ages bearing a different skin color.

The group is often mistaken as being Catholic because it celebrates the main elements of the traditional Latin Mass. It has nuns and its own pope, Romanus Ong’ombe, who lives at church headquarters in Got Kwer, located in Migori County, in southwestern Kenya.

“Legio Maria offers solutions to the problems we face every day,” said Emily Anyango, 28, a mother of three who joined the sect. “The prophets can pray for you and you get a job, husband, wife and children, and even get healed from sicknesses.”

Anyango said she could personally testify to the power of the prophet’s prayer.

“My husband had no job for years after attaining good grades in university,” she said. “He had been bewitched by his aunt. But when I went to the church the prophet prayed for him and he got a job.”

Ong’ombe, the group’s pope, said the church is expanding rapidly because of the good teachings and the miracles its leaders perform. “We are growing as a church,” he said. “We believe that the Second Coming of Jesus has been fulfilled in Simeo Ondeto because he is the Son of God. We are looking forward to meeting him in paradise after death.”

But Bishop Philip Anyolo, chairman of the Kenya Conference of Catholic Bishops, said this new religious movement is misleading its followers and that many are returning to the Catholic Church.

“We are not threatened by Legio Maria,” Anyolo said. “They have false teachings and fake miracles and that does not develop people.” 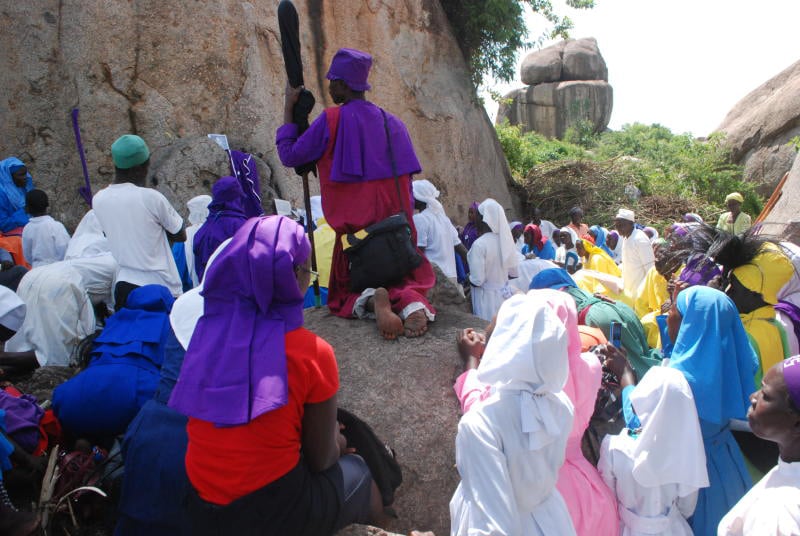 Members of the Legio Maria sect pray while facing a rock on Aug.19, 2018, at Got Kwer church in western Kenya. Many adherents visit caves and rocks in the area for prayer vigils, then afterward say they have received the Holy Spirit and start to prophesy. RNS photo by Tonny Onyulo

Kenyans’ cultural affinity to witchcraft has lured many to churches where visions, dreams and superstitious beliefs are explained by church elders in religious terms, said Anthony Maiga, a theologian and pastor for the Methodist Church of Kenya in the capital, Nairobi.

“When Kenyans are faced with these challenges in life they blame it on the bad spirits and seek deliverance from such religious groups who they believe can solve them,” he said.

Anyolo said the Catholic Church had taken steps to ensure its members are not deceived by making sure adherents are well-versed in the church’s catechism.

But Otieno said it was not teachings but practical answers to spiritual problems that will ultimately win the day with new converts.

“We have very many people coming here every day to seek for solutions to their problems,” said. “We encourage them to come and fellowship with us.”

Signs of the Times
My encounters with Joseph Ratzinger — and Pope Benedict XVI
Follow us on Facebook!
Submit your photos to RNS