DUBLIN (RNS) — Dublin was a divided city this weekend as Pope Francis’ visit, the first by a Catholic pontiff since 1979, stopped traffic and dominated conversation in pubs, on public transportation, in taxis, shops, and on the street.

For many in this overwhelmingly Catholic country, the pope’s appearance at the World Meeting of Families was a historic occasion to be celebrated, despite the latest reports of clergy sex abuse in the United States and Australia and Catholic bishops’ alleged attempts to cover them up.

For Nick Wall, a Londoner who attended the closing Mass Sunday (Aug. 26) with his wife, Susan, and their two teenage children, it’s time to forge a new church focused on supporting the faith of young people.

“There’s always been historical problems.” Wall told Religion News Service. “We all need to acknowledge things have happened and move forward with it.”

Others regarded Francis’ visit as a painful reminder of the profound harm done by an institution that has deeply shaped life in Ireland.

As approximately 130,000 pilgrims made their way into Phoenix Park to celebrate the closing Mass with the pope, some 5,000 were estimated to have attended a “Stand4Truth” rally at the Garden of Remembrance. 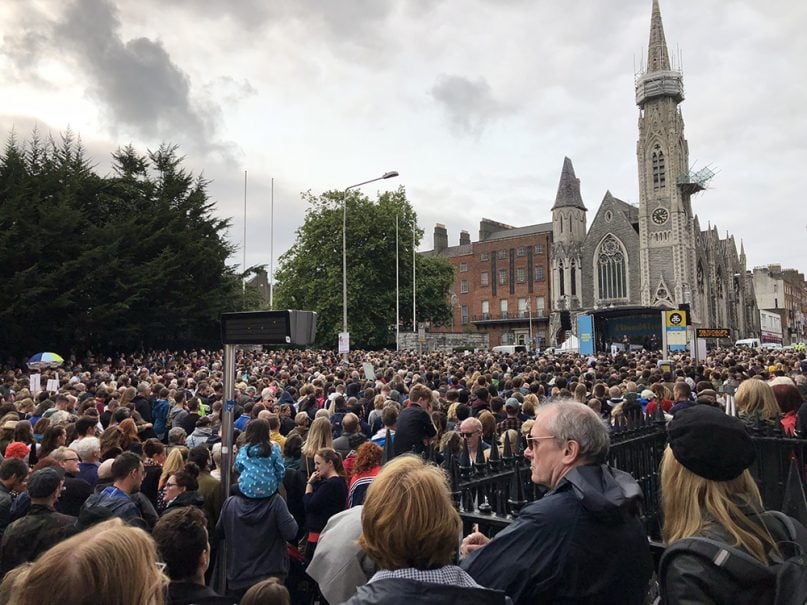 Thousands of people attend the “Stand4Truth” rally at the Garden of Remembrance in Dublin to protest Pope Francis’ visit on Aug. 26, 2018. RNS photo by Christine A. Scheller

One of those protesters was Ann Harper of Dublin, who was mindful of the church’s long history of mistreatment of its more vulnerable members. As a child, Harper said, she saw unmarried pregnant women working in a convent laundry on visits to her great aunt who was a nun. “I’m praying and hoping today that my relative was kind to those women who had babies,” she said.

In his two-day tour of Ireland, the pontiff attempted to reach both of these audiences. At several stops he acknowledged clerical abuse in Ireland, while straining to focus on the theme of the benefits of family life.

Earlier on Sunday, at a shrine to the Virgin Mary in the village of Knock, Francis said he silently prayed for all the victims of abuse committed by members of the Catholic Church in Ireland. He met with eight abuse survivors on Saturday and addressed the scandal in a speech to government officials at Dublin Castle.

In his closing homily, Francis departed from his script and sought forgiveness for exploitation and abuses “of power, conscience, and sexual abuse perpetrated by members with roles of responsibility in the Church” in Ireland.

“We ask forgiveness for the times that as a Church we did not show survivors of whatever kind of abuse compassion and the seeking of justice and truth through concrete action,” he said.

Francis encouraged Catholics to be honest about the difficulty of following Jesus in turbulent times.

“Many of (the apostles) were upset, confused or even angry, struggling to accept his ‘hard sayings,’” he said, quoting from the Gospel of John, “so contrary to the wisdom of this world. In response, the Lord tells them directly: ‘The words I have spoken to you are spirit and life.’”

The pope encouraged attendees to take all they heard and experienced this week back to their homes to be “a source of encouragement to others” and to share with their loved ones Jesus’ words of eternal life.

He described families as “both a privileged place for, and an important means of, spreading those words as ‘Good News’ for everyone, especially those who long to leave behind the desert and the ‘house of bondage.’” 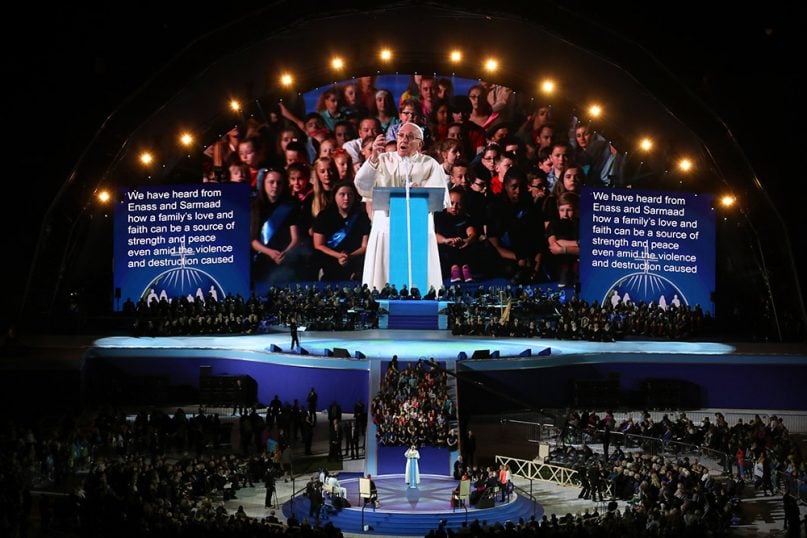 Pope Francis speaks at Croke Park in Dublin on Aug. 25, 2018, during the World Meeting of Families 2018. Photo by Maxwell Photography/WMOF2018

As the pontiff flew back to Rome, he faced reporters’ questions about a letter released Sunday by the Vatican’s former ambassador to the United States alleging that both Pope Francis and Pope Emeritus Benedict XVI were complicit in allowing former Washington Cardinal Theodore McCarrick to continue in ministry even after McCarrick had been sanctioned for having sexual contact with seminarians in his charge.

In the letter, Archbishop Carlo Maria Vigano, wrote that the pope should resign.

Francis refused to comment on the letter, telling reporters to “make your own judgment.” Later he suggested that he would address Vigano’s allegations at a later date.

The cloud hanging over Francis’ appearance, said Irish abuse survivor Colm O’Gorman, who organized the event at the Garden of Remembrance, was a bittersweet contrast to Saint John Paul II’s visit nearly 40 years ago. With 300,000 in attendance at a Mass in Galway, “John Paul held out his arms and said,’Young people of Ireland, I love you,’” O’Gorman recalled.

“I remember that moment because I believed him,” he said.

A year and a half later, O’Gorman was raped by a Catholic priest who had been ordained months before John Paul II’s visit despite multiple accusations against him. The priest remained in ministry for years until O’Gorman sought justice for himself.

“Now when I think about ‘Young people of Ireland, I love you,’ I think, ‘No, you didn’t. You did not love us. And we have discovered over the last 20 years the depth of how you did not love us,” he said.

The protest was followed by a silent procession to Gloucester Street laundry, one of Ireland’s infamous Magdalene laundries that relegated unmarried mothers to confinement and menial labor.

At the laundry, which closed in 1996, O’Gorman recalled to journalists how John Paul II rode down Gloucester Street without stopping to acknowledge the detention of women and girls there. “They weren’t allowed outside to watch him pass,” the abuse survivor said.

Francis stopped for a moment of reflection at a nearby church, he said, but didn’t visit the abuse site either. “So we’ve come to this building,” O’Gorman said. 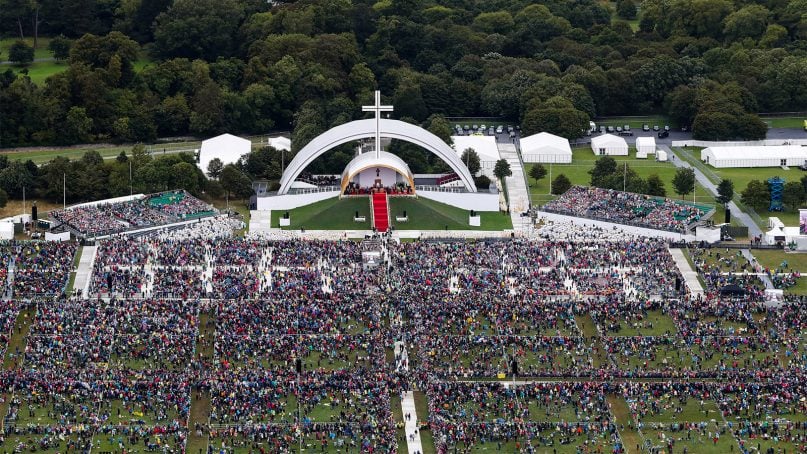 Pope Francis leads Mass at Phoenix Park in Dublin on Aug. 26, 2018, during the World Meeting of Families 2018. Photo by Maxwell Photography/WMOF2018

While 500,000 were expected at the closing Mass in Phoenix Park on Sunday, heavy rain in the morning and an arduous walk through Phoenix Park to the event site may have contributed to the lower turnout.

The previous day, an estimated 82,500 people attended the Festival of Families at Croke Park stadium, a celebration of family life that included music by Irish stars Daniel O’Donnell and Nathan Carter and international superstar Andrea Bocelli, along with more than 2,000 other performers.

Whether celebrating or protesting, many of those who attended the events of the weekend agreed the abuse scandal had colored their experience. Anthony Coleman, a Dublin taxi driver, attended the Festival of Families, where his 14-year-old grandson sang in one of the choirs.

“I love everything that’s going on, with the exception of the abuse and everybody being upset about that,” Coleman said. “I’m a little bit annoyed that some people are using the abuse just to give out or fight.”

As he watched the pope enter Croke Park, Coleman said he wanted to cry with joy. At a pub for a pint afterwards, his buddies admitted having the same emotional response, he said.

Archbishop William Slattery of Pretoria, South Africa, attended both the Festival of Families and the closing Mass.

“The pope has been welcomed with great joy by the people,” Slattery said, noting that the vast majority of abuse took place the 1970s and’ 80s before the church took firm action to stop it. But he conceded that there was “an element of people that feel certain issues of the past have not been cleared up yet and much more must be done about it.”