(RNS) — The past few months have been filled with stories of pastoral failure — for Protestants and Catholics alike. These stories inundate our social media feeds, causing outrage and heartache but rarely self-reflection.

Once in a while, however, a story hits close to home. That’s been the case for us with Willow Creek.

For my (Kyle) entire childhood, Willow Creek was my church home. I found Jesus there. My whole family came to know the Lord there. My father pastored there. I worshipped God, grew in the faith, and wrestled through his call on my life in that place.

During those years, there would often be a short, dramatic skit before the sermon that would illustrate the point of one of the Bible readings. In one, a man and a woman pretended Willow Creek had been abandoned and become a pile of stones. As the actors reflected on the skit, they proclaimed the truth that Willow was not a building, and that God’s kingdom did not rest on their achievements or demise.

This drama has come to mind recently as I see the pain, struggle and failure of a place that means so much to me and my family. The numerous allegations of Bill Hybels’ sexual misconduct have exposed cracks in an institution believed to be indestructible.

But this is not solely a Willow problem. It’s a problem that afflicts American evangelicalism, a movement long deemed indestructible as well. Many influential pastors have fallen; at times, followed by the collapse of the institution they shepherded.

Perhaps there is something for us all to hear in the wisdom of the church drama I saw as a child. Perhaps many of us have looked upon American evangelicalism and said to the Lord — as the disciples once did — “Look, Teacher, what wonderful stones and what wonderful buildings!” (Mark 13:1)

As we watch many leaders fall, and as we discover rooms in this vast building that have become “dens of robbers,” what do we do?

Instead of turning to superficial answers, we must see this as an opportunity to have a new conversation in the American evangelical church. 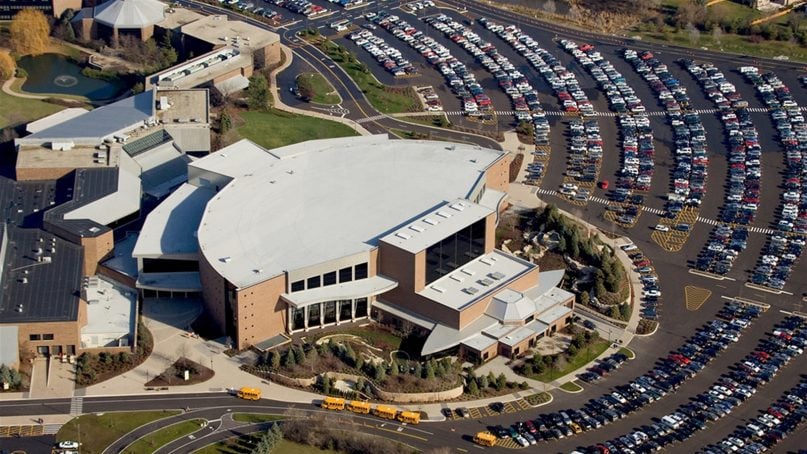 We need a new conversation about power.

The fundamental ailment of the evangelical church today is toxic power. Toxic power is anchored in prideful autonomy and manifested in forms of competition, coercion, domination and abuse. It is power in strength for the sake of control. It is not the way of the cross, but rather the way of the world, the flesh and the devil.

Toxic power shows up in the deep belief that the power of a church is measured by the degree to which it makes us feel special and significant. It shows up in our targeted evangelism strategies, pointed toward the powerful, influential, prosperous and put together, as opposed to the weak, marginalized, poor and broken.

We see it in our insatiable appetite for sermons that tell us the good news is that we can do better and feel better if we try harder.

We see it in our obsession with identifying our “spiritual gifts,” for the very purpose of operating in our strengths so that we can avoid our weakness at all cost. We see it in the way biblical qualifications for elders are replaced by notions of business success and social status.

We see it in our mode of worship determined to generate a felt experience of transcendence, regardless of whether God is involved or not.

We see it in our primary markers of good leaders — charisma, oratory skill, management prowess and entrepreneurial vision. Needless to say, toxic power has so infected the church today that it has burrowed its way into the very depths of our identity.

Along the way, that toxic power has replaced the kingdom power the Bible calls us to. Kingdom power is power shaped by the cross — known in weakness and aimed at love.

When we make our pastors the functional cornerstones of the church, look for gurus to rally around, or use church resources to manipulate The New York Times best-seller list, then we are abandoning the way of Jesus.

When we ignore the cries of women who have been harmed and abused and preference those in authority, then we are embracing evil. The church has been co-opted by the powers and principalities of darkness. The devil has sold us the lie that we can use worldly means to achieve kingdom ends. He has duped us into believing we are not prone toward dangerous and controlling forms of power in our own lives. 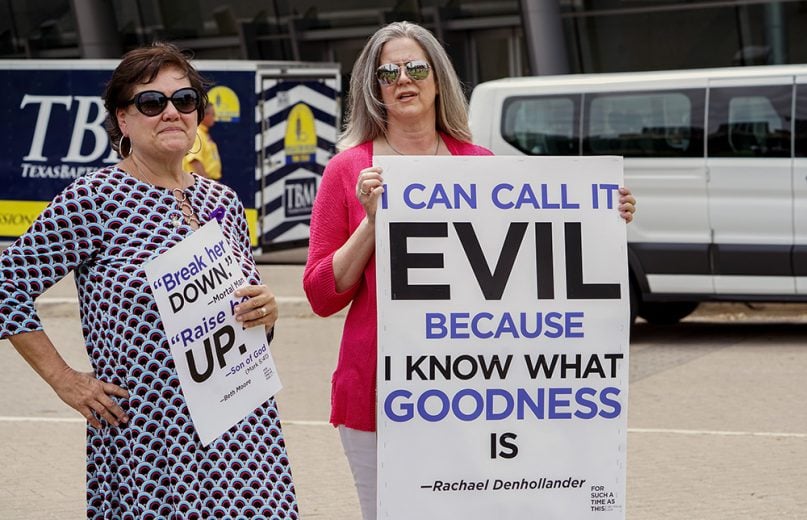 Participants of the “For Such a Time as This Rally” hold signs outside of the Kay Bailey Hutchison Convention Center on June 12, 2018, on the first day of the two-day Southern Baptist Convention annual meeting in Dallas. The rally calls for Southern Baptist clergy to receive training on how to treat women with respect, how to handle allegations of abuse, and how to minister to victims of abuse. Photo by Marc Ira Hooks

As a pastor (Jamin) I recognize the evangelical church in America is at a tipping point. The decisions we make in response to these very public failures will form us for generations.

Our sins have been exposed.

We are being shown the truth of our heart. The devil would have us believe this is something to hide and to fear. But it is a gift. God’s redemptive healing always happens when we draw near to him in the truth of our failure.

If we seek to stand against the powers and principalities we must begin with confession. It is tempting for me to fix my judgment on the failures of famous pastors. But I believe the invitation of the Lord is to first attend to the log in my own eye. (Matthew 7:3)

As a pastor, I have succumbed to the temptation to wield my gifts to build the church, rather than trusting in Christ. I confess that I have at times used people as resources to accomplish my ministry dreams, rather than shepherding their souls as a patient pastor.

As the Book of James tells us, may we confess our sins to one another and pray the Lord will heal the church.

This is where the conversation must begin.

(Kyle Strobel is associate professor of spiritual theology and formation at Talbot School of Theology. Jamin Goggin is a pastor at Missions Hills Church in San Marcos, Calif. They are co-authors of “The Way of the Dragon or the Way of the Lamb.” The views expressed in this commentary do not necessarily represent those of Religion News Service.) 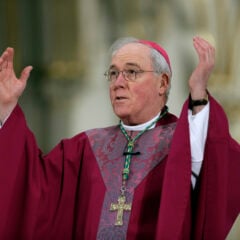 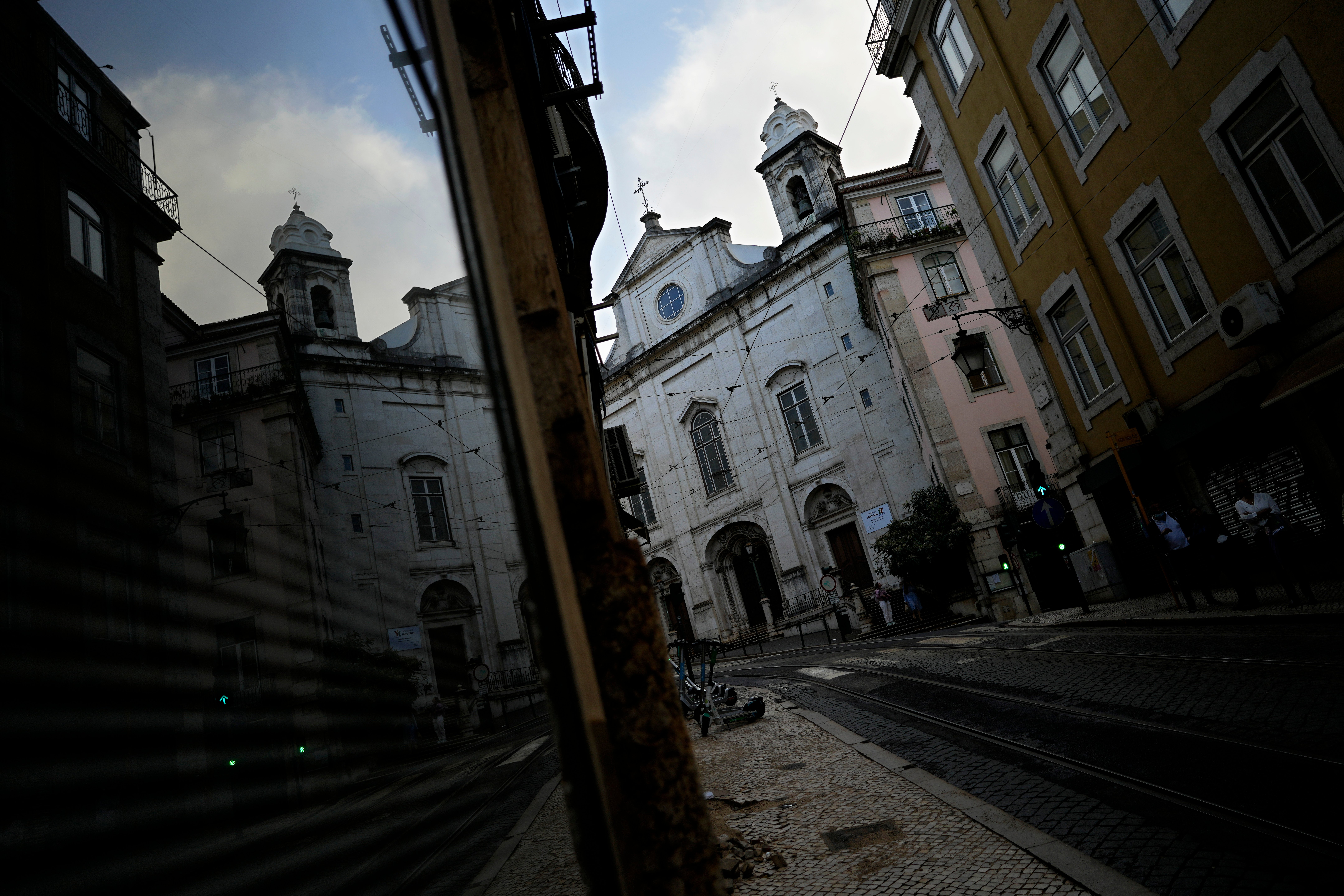 Opinion
NDAs are a tool for toxic church cultures
Follow us on Facebook!
Submit your photos to RNS