(The Conversation) — A throng of Trinidadians line up along the streets of St. James and Cedros to admire the vibrant floats with beautifully bedecked models of mausoleums. Their destination is the waters of the Caribbean, where the crowds will push them out to float.

This is part of the Hosay commemorations, a religious ritual performed by Trinidadian Muslims, that I have observed as part of the research for my forthcoming book on Islam in Latin America and the Caribbean.

What fascinates me is how a practice from India has been transformed into something uniquely Caribbean.

Ashura, the 10th day of Muharram, is marked by public mourning and a re-enactment of the tragedy. Shiite Muslims put on passion plays that include inflicting suffering, as a way to remember Hussein. In Iraq, Shiite are known to beat themselves with swords. In India, mourners whip themselves with sharp blades. Some Shiite also visit Hussein’s shrine in Iraq. 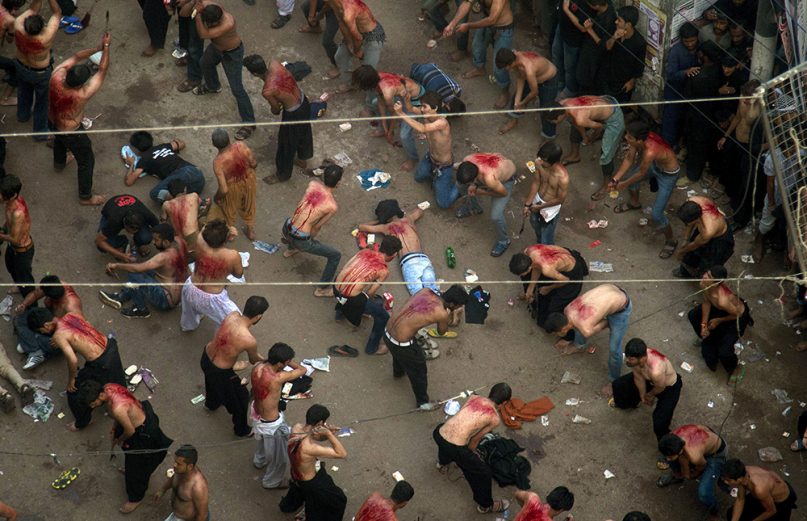 Shiite Muslims flagellate themselves with knives attached to chains to mark Ashura in Karachi, Pakistan, on Oct. 12, 2016. Shiites mark Ashura, the tenth day of the month of Muharram, to commemorate the martyrdom of Imam Hussein, the grandson of the Prophet Muhammad, at the Battle of Karbala in present-day Iraq in the 7th century. (AP Photo/Shakil Adil)

The commemoration has also become a symbol for the broader Shiite struggle for justice as a minority in the global Muslim community.

In Trinidad, the 100,000 Muslims who make up 5 percent of the island’s total population, celebrate the day of Ashura, as Hosay – the name derived from “Hussein.”

The first Hosay festival was held in 1854, just over a decade after the first Indian Muslims began to arrive from India to work on the island’s sugar plantations.

But Trinidad at the time was under British colonial rule and large public gatherings were not permitted. In 1884, the British authorities issued a prohibition against Hosay commemorations. Approximately 30,000 people took to the streets, in Mon Repos, in the south, to protest against the ordinance. Shots fired to disperse the crowd killed 22 and injured over 100. The ordinance was later overturned.

The “Hosay Massacre” or “Muharram Massacre,” however, lives in people’s memories.

These days, Hosay celebrations in St. James and Cedros not only recall Hussein, but also those killed during the 1884 Hosay riots. Rather than recreate the events through self-flagellation or other forms of suffering, however, people in Trinidad create bright and beautiful floats, called “tadjahs,” that parade through the streets to the sea. The tadjah, a colorful model of a mausoleum. Photo by Nicholas Laughlin/Creative Commons

Each tadjah is constructed of wood, paper, bamboo and tinsel. Ranging from a height of 10 to 30 feet, the floats are accompanied by people parading along and others playing drums, just as is the practice in India’s northern city of Lucknow. Meant to reflect the resting place of Shiite martyrs, the tadjahs resemble mausoleums in India. To many, their domes might be a reminder of the Taj Mahal.

Walking ahead of the tadjahs are two men bearing crescent moon shapes, one in red and the other in green. These symbolize the deaths of Hussein and his brother Hassan – the red being Hussein’s blood and the green symbolizing the supposed poisoning of Hassan.

The elaborateness of the tadjahs continues to increase each year and has become somewhat of a status symbol among the families that sponsor them.

A bit carnival, a bit Ashura 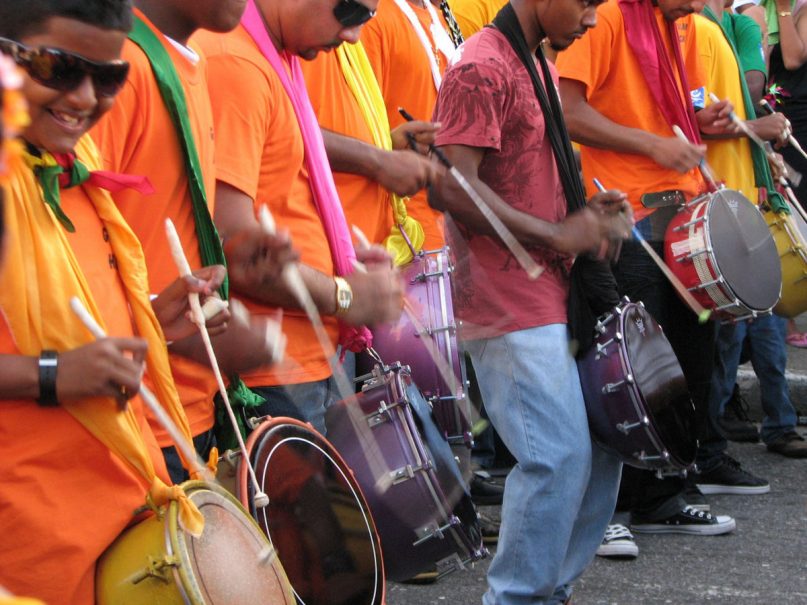 Trinidad’s Hosay brings in a more carnival-like joy to a somber remembrance with tassa drummers. Photo by Nicholas Laughlin/Creative Commons

While the festival is certainly a somber one in terms of its tribute, it is also a joyous occasion where families celebrate with loud music and don festive attire. This has led some to compare Hosay to Trinidad’s world-famous carnival with its accompanying “joie de vivre.”

But there are also those who believe that the occasion should be a more somber remembrance of the martydom of Hussein. More conservative Muslims in Trinidad have made attempts to “reform” such celebrations. These Muslims believe local customs should be more in line with global commemorations like those in Iraq or India.

What I saw in the festival was an assertion of both the Indian and Trinidadian identity. For Shiite Muslims, who have dealt with oppression and ostracism – both in the past and in the present – it is a means of claiming their space as a minority in Trinidadian culture and resisting being pushed to the margins. At the same time, with its carnival-like feel, the festival could not be more Trinidadian.

Indeed, the celebrations each year illustrate how Indian and Trinidadian rituals and material culture merged to create a unique festival.

(Ken Chitwood is Ph.D. Candidate in Religion in the Americas, Global Islam, at the University of Florida.)