CHAPEL HILL, N.C. (RNS)  — The 80 or so people who gather on Sunday at the Chapel Hill Mennonite Fellowship, like many other members of the Mennonite Church USA, are accustomed to singing hymns a cappella in four-part harmony and making decisions by consensus.

It was by consensus more than two years ago that the congregation decided, after a year of study, to welcome LGBTQ people into the full life of the church — a decision that led its pastor perform a same-sex wedding between two women. That wedding tested core Mennonite tenets about sexuality and hastened a growing realignment in this denomination that traces its roots to the 16th-century Anabaptists.

In response, the congregation transferred its membership this summer to a conference of Midwestern churches in Iowa, Illinois, Indiana, Ohio and Michigan. The Central District, with its headquarters in Goshen, Ind., not only admitted the North Carolina congregation into full membership; last month it also restored Villegas’ ordination credentials.

Chapel Hill Mennonite is not the first church to transfer its membership due to its theological views, though Villegas is the first Mennonite pastor to have his credentials reinstated in the process.

Nor is it the first time an American denomination has realigned over social issues: In the 19th century, Baptists, among others, split over slavery, creating the Southern Baptist Convention; in the 20th century denominations fractured over women’s ordination.

In the 21st century, sexuality has by far provided the most turbulence. In 2003 the Episcopal Church elected Gene Robinson as its first openly gay bishop, and conservative Episcopalians responded by aligning with dioceses in Africa or forming new Anglican bodies in the U.S., divorcing themselves from the church altogether.

The Presbyterian Church USA, the United Methodist Church and the United Church of Christ have also suffered from breakaways and reconfigurations.

Chapel Hill’s move offers a vivid example of the dramatic reshaping that even the smallest of denominations as changing beliefs on sexuality and gender threaten to pull them apart.

“There’s a shift toward more affinity-based conferences, based on theological convictions as opposed to geography,” said Michael Danner, associate executive director for church vitality at the Mennonite Church USA. Members of Chapel Hill Mennonite Fellowship sing hymns in four-part harmony with no instrumental accompaniment during a service on Sept. 23, 2018. RNS photo by Yonat Shimron

The Mennonite realignment — at least on the issue of LGBTQ inclusion — cuts both ways: Conservative as well as liberal congregations are breaking away and coming together in new ways.

Since its creation in 2002 as the merger of two older denominations, the Mennonite Church USA has seen significant changes. Three of its 21 regional conferences have left the denomination, including the largest and most traditional, the Lancaster (Pa.) Conference. The national body now has 69,000 members in 625 churches and remains the largest Mennonite organization.

But the realignment is far from over. Several of its LGBTQ-welcoming churches are clustering in three conferences that have declared themselves affirming of LGBTQ Christians. The Central District Conference, to which the Chapel Hill church now belongs, already includes churches from Florida, Georgia, North Carolina and Virginia. Meanwhile, the conservative Southeast Conference is considering leaving.

Article 19 of the Mennonites’ “Confession of Faith” states: “We believe that God intends marriage to be a covenant between one man and one woman for life.” But the church also passed a resolution in 2015 on “forbearance in the midst of differences” in which it vowed “to offer grace, love and forbearance toward conferences, congregations and pastors in our body who, in different ways, seek to be faithful to our Lord Jesus Christ on matters related to same-sex covenanted unions.”

For the Chapel Hill congregation, made up  largely of professionals in their 30s with small children,  the process started in 2015 when a member stood up at a church meeting and proposed that the congregation welcome gays and lesbians. After a yearlong study that included adult Sunday school classes and Saturday morning workshops, the church voted unanimously to extend full rights to LGBTQ members.

Then, on May 21, 2016, Villegas officiated at a wedding of a couple, both named Kate. Two days later he resigned his seat on the denomination’s national Executive Board.

In the Mennonite Church USA, the conference is the body that credentials pastors —  not the church or the denomination — and the Virginia Conference immediately suspended Villegas’ credentials. 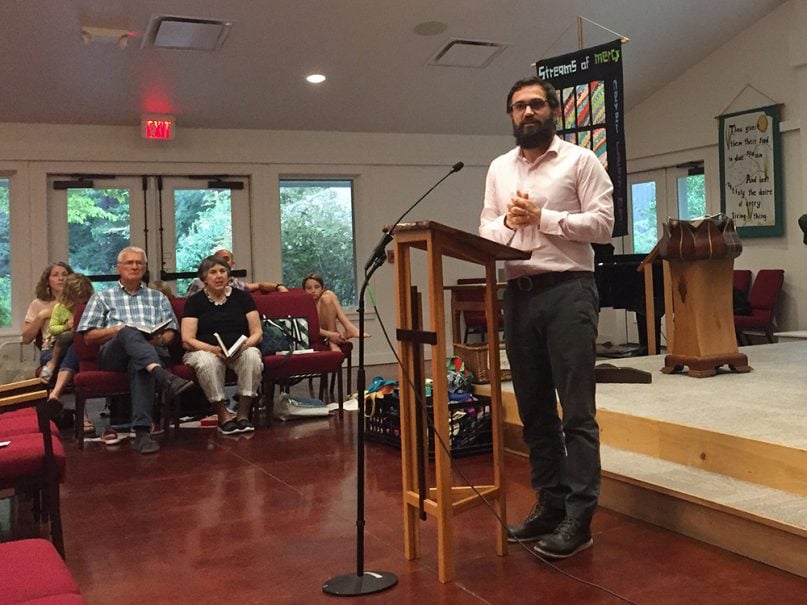 Pastor Isaac Villegas speaks to his North Carolina congregation on Sept. 23, 2018. Villegas’ ordination credentials were suspended after he conducted a same-sex marriage in 2016. But after the Chapel Hill Mennonite Fellowship switched to another conference his credentials were restored. RNS photo by Yonat Shimron

But the congregation and many other Mennonites across the country rallied to his side. The suspension came on the 10th anniversary of Villegas’ pastorate, so the church threw him a party. It also started a “We Stand with Isaac” social media campaign in which churches across the country took photos and signed letters of support.

Then the discussion turned to whether to stay in the Virginia Conference. Since Villegas lost none of his salary or benefits as a result of the suspension the decision came down to sentiment: Many in the church did not want to walk away from the fellowship and ties to other local Mennonite congregations.

“In some ways, it was an easier decision to decide to become a welcoming congregation,” said Rebecca Rich, the church moderator. “It was more challenging to get to a unanimous place where we all agreed to leave the Virginia Mennonite Conference.”

But after it became clear that the Virginia Conference was in no rush to resolve the suspension, the church applied to the Central District Conference. Chapel Hill documented all the steps it had taken to try to reconcile its differences with the Virginia Conference but also acknowledged it was not about to give up the principles it had agreed to about LGBTQ people. In fact, during his suspension, Villegas performed two more same-sex weddings.

“This congregation has been a gift to me in my spiritual journey,” said Sarah Jacoby Murphy, who was married to her partner, Sally, shortly after joining the church. “Being able to come into that group of people and not have any questions about the limits of what they were going to do to support me as a fellow member, that’s huge, and something most queer people don’t get to experience.”

For many in the congregation, the story of the Chapel Hill Mennonite Fellowship has a happy ending. But Villegas noted that in a denomination that values peace — its logo is a beak of a dove clutching an olive branch— a commitment to living together with differences may have suffered.

“I worry that in terms of the health of our denomination, that this kind of realignment may mean that congregations that disagree with one another are no longer going to be bound together in intimate conversations or networks of relationships, so that hard conversations are no longer going to happen,” said Villegas. “We have a denominational commitment to agree and disagree in love. I worry about how we can continue that commitment the way things are going.”