WASHINGTON (RNS) — Demonstrators at the Catholic University of America are calling for the resignation of a dean over tweets he published criticizing a woman who accused Supreme Court nominee Brett Kavanaugh of sexual misconduct.

In addition, some demonstrators insisted Dean Will Rainford’s remarks contradicted core ethical norms of social workers trained by the CUA school he heads — the National Catholic School of Social Service.

“Our message was his comments were unacceptable and we want him to resign,” said Ellen McSweeney, a second-year master of social work student at the NCSSS and a lead organizer of the protest Monday (Oct. 1).

The idea for  a demonstration emerged on Wednesday when CUA students and alumni noticed a tweet by Rainford about Julie Swetnick, the third woman to accuse Kavanaugh of participating in sexual misconduct. Among other claims, Swetnick said Kavanaugh was at a house party in the early 1980s where she was allegedly the victim of a gang rape.

“Swetnick is 55 y/o. Kavanaugh is 52 y/o. Since when do senior girls hang with freshman boys?” Rainford tweeted, using his @NCSSSDean Twitter account. “If it happened when Kavanaugh was a senior, Swetnick was an adult drinking with & by her admission having sex with underage boys. In another universe, he would be victim and she the perp!”

The backlash was swift. Students and alumni quickly decried the remarks on social media, and several dozen students walked out of class in protest.

On Friday, CUA President John Garvey sent a campus email explaining he had suspended Rainford for the rest of the semester, saying his remarks about Swetnick “demonstrated a lack of sensitivity to the victim.”

“Rainford’s tweets of the past week are unacceptable,” Garvey wrote. “We should expect any opinion he expresses about sexual assault to be thoughtful, constructive, and reflective of the values of Catholic University, particularly in communications from the account handle @NCSSSDean.” 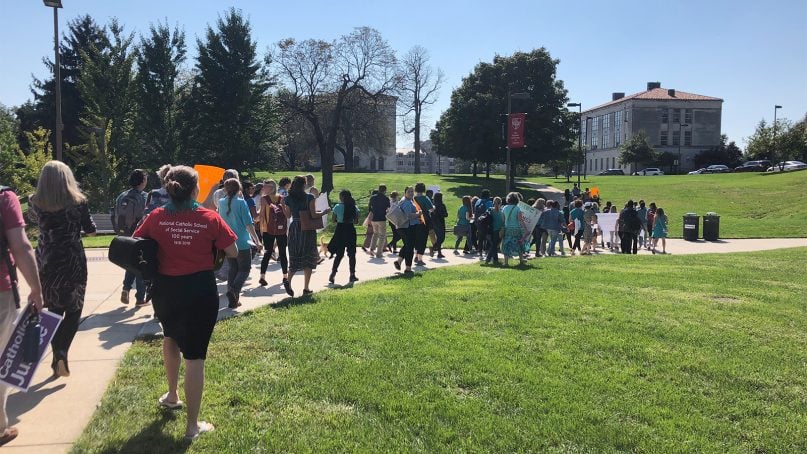 Protesters march across the Catholic University of America campus on Oct. 1, 2018, in Washington, D.C. Photo courtesy of Steve McKenna

Rainford has since deleted the tweet and publicly apologized, but demonstrators who gathered outside CUA’s Edward J. Pryzbyla University Center on Monday afternoon insisted suspension wasn’t sufficient punishment. Attendees said the protest attracted more than 100 people — including both students and faculty — where some held signs reading “#notmydean” emblazoned above Rainford’s now-deleted tweets. Another read “Start by believing survivors not mocking them on Twitter,” and others called for new leadership at the school.

“For alumni, Dean Rainford’s comments are a professional liability,” Sara Yzaguirre, a 2012 graduate of the school who works with sexual assault survivors, said to the crowd. “Several alumni have told me that they are considering removing their degree from their office walls due to negative impressions of this institution.”

McSweeney agreed, noting that both liberal and conservative students had voiced support for the demonstration.

After the rally, demonstrators marched away to present administrators with a letter signed by 77 students asking for Rainford to be replaced. McSweeney said it echoed a similar letter signed by 188 alumni.

The school, for its part, issued a statement Monday afternoon.

“Faculty, students and alumni came together today to tell their stories and to register their protests concerning Dr. Rainford,” it read. “The Catholic University of America ensured a safe and secure environment for supporters to come together and make their voices heard. We encourage discussion and dialogue on campus and look forward to the review process to identify where improvements in our social work school can be made.”

Attendees only reported seeing one counterprotester at the event.

Rainford did not immediately respond to a request for comment.

News
Court declines to hear church’s attack on COVID restrictions
Follow us on Facebook!
Submit your photos to RNS