BUCHAREST, Romania (RNS) — Romanians were given the chance over the weekend to change the definition of marriage in the national constitution to read “union between a man and a woman” from the current language, which specifies only a “union between spouses.”

But with less than 21 percent of Romanians voting over the two days of the referendum, the initiative was rendered void, a victory for LGBT rights groups that had urged a boycott of the vote. A 30 percent turnout was needed to validate the referendum measure.

“The LGBT community in Romania boycotted this referendum because we believe human rights should not be the subject of a popular vote,” said Vlad Levente Viski from MozaiQ, a group advocating for LGBT rights in Romania. “Moreover, the boycott was a protest against the Church, against populist politicians, against the wave of hatred directed at us. We were confident Romanians would not be manipulated into validating with their vote this referendum.” 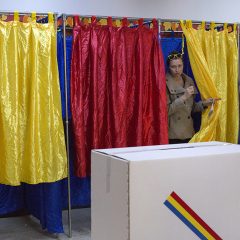 A woman leaves a voting booth at a polling station in Bucharest, Romania, on Oct. 7, 2018, in a referendum to change the constitutional definition of “family.” Even though 91 percent of the people who voted said “yes” to the change in the constitution, less than 21 percent of the population voted, well below the threshold of 30 percent needed for the referendum to be valid. RNS photo by Alexandra Radu 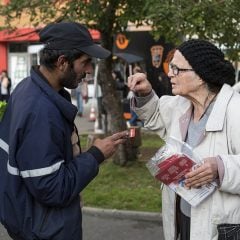 Veronica, right, a volunteer with the Coalition for Family, passes out flyers inviting people to vote in Bucharest, Romania, on Oct. 2, 2018. “I found out about this initiative from the church,” she said. “The priest told us that if the referendum does not pass, we will be in the situation where two women or two men would get married in church. And if he would refuse to officiate the marriage, he could be fired. We can’t let that happen, so the referendum has to pass.” RNS photo by Alexandra Radu 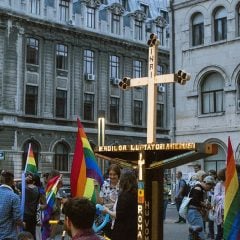 LGBT advocates demonstrate against a referendum to redefine marriage in early September 2018, in Bucharest, Romania. “As a gay Christian person, I find myself in the principles that are the basis of Christianity: love toward others and love toward God. I think these principles guide my life, my decisions, my actions. Looking at what is happening lately in the Romanian Orthodox Church, I cannot feel represented by the church any more because it failed badly in practicing exactly these principles, turning people against each other. A community of believers should accept everybody without discrimination,” said Victor Ciobotaru, a member of Accept, a group advocating for LGBT rights in Romania. RNS photo by Alexandra Radu 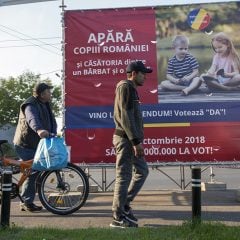 Banners saying “Defend Romania’s children and marriage between a man and a woman” and urging a “yes” vote were displayed throughout the country, often in the vicinity of churches. RNS photo by Alexandra Radu 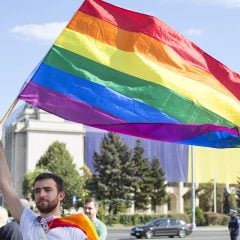 “Even though the referendum was invalidated, it provided us the opportunity to know the degree of secularism in today’s Romania and also the main opinions in the society about defending the moral values based on a belief in God and the 2,000-year history of the Romanian people,” said the Romanian Orthodox Church in a press release after the referendum. RNS photo by Alexandra Radu 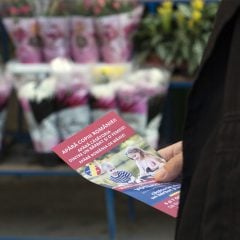 A shopper reads a pro-referendum flyer stating, “Defend Romania’s children! Defend the marriage between a man and a woman! Defend the Romania of tomorrow!” while at a market in Bucharest, Romania, on Oct. 2, 2018. RNS photo by Alexandra Radu

The change was proposed in 2016 by a conservative group called the Coalition for Family and quickly gained support from the Romanian Orthodox Church. The coalition had gathered 3 million signatures on its petition, far more than the required amount to qualify for the ballot.

Human rights and LGBT groups in Romania claimed the definition of family in the measure would increase discrimination  toward not only  same-sex couples but also single parents or children raised by other relatives.

In response, the Coalition for Family took on a campaign focusing on the preservation of the “traditional family” and against LGBT.

Romanian civil law clearly states marriage is the union between “a man and a woman” and the referendum would not have impacted judicial rulings. Representatives of the Coalition for Family were nonetheless concerned. “Laws can be changed overnight without the agreement of the people,” said Pavel Chirila, founding member of the Coalition for Family. 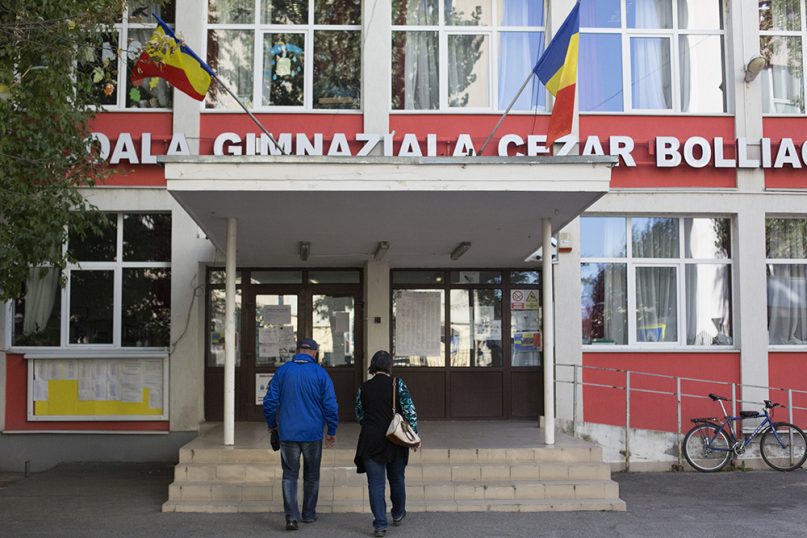 Voters head toward a polling station at a middle school in Bucharest, Romania, on Oct. 7, 2018. Romania is one of the last countries in the EU that does not recognize any form of civil union between same-sex persons. RNS photo by Alexandra Radu

“The people want the notion of marriage between a man and a woman clearly defined in the constitution and nowhere else, because this has been coherent with the moral values of our religion for the last 2,000 years.”

Neither the urging of the Romanian church nor government maneuvering in favor of the referendum — the voting was originally scheduled to last only one day, with a minimum participation rate of 50 percent, before the ruling Social Democrats changed the rules — was enough to overcome the opposition.