(RNS) — Latter-day Saints and civil rights leaders are making plans for a collaboration to foster education and economic empowerment in urban centers across the country.

Officials of the Church of Jesus Christ of Latter-day Saints and the NAACP met in Salt Lake City earlier this month to continue hashing out plans for an “education and employment initiative” to be started in cities from Baltimore to San Francisco.

“They changed; they’re singing a new song,” the Rev. Amos Brown, chair of the NAACP’s interreligious relations committee, told fellow black Baptist clergy in Washington, D.C., about his recent meeting in Utah. “They got a new walk, a new talk and they have admitted that there were checkered instances in the past that they were engaged in racial ideas and practices.” 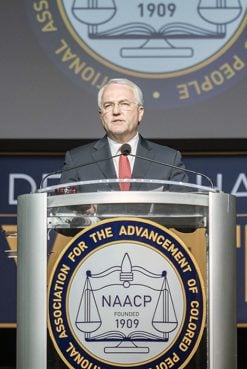 Elder Jack N. Gerard, of the Seventy of the Church of Jesus Christ of Latter-day Saints, announced expanded collaboration between the NAACP and the church at the organization’s 109th annual national meeting in San Antonio, Texas, on July 15, 2018. ©2018 Intellectual Reserve Inc.

The collaboration, scheduled to launch next year, comes as the LDS church marks the 40th anniversary of the “revelation” about race that then-President Spencer W. Kimball declared he received. According to that revelation, the Mormon priesthood was no longer limited by color, opening the way for blacks to have leadership positions.

In May, current President Russell M. Nelson joined with top church and NAACP officials in a call for “greater civility, racial and ethnic harmony and mutual respect.”

Standing next to him, on the 64th anniversary of the Brown v. Board of Education decision that declared school segregation unconstitutional, NAACP President Derrick Johnson spoke of their shared hope that “all peoples can work together in harmony and should collaborate more on areas of common interest.”

The dialogue between the two groups started officially this spring when the LDS church hosted a “unity luncheon” for NAACP board members in Salt Lake City. That was followed by the first-time speech of a top LDS leader at the civil rights organization’s annual meeting in July. Then NAACP board members attended a portion of the recent Mormon biannual conference.

The collaboration will be based on internal LDS “self-reliance” programs, which church leaders say they hope will enhance the employment opportunities and financial well-being of participants.

Ahmad Corbitt, a spokesman for the church who recently directed missionaries in the Caribbean, said the most recent meetings focused on making materials and manuals for the initiative appropriate for people of all faiths and no faith.

Topics include personal finances, entrepreneurial advice and getting a “better education for a better job.”

Planners anticipate the programs will primarily be attended by African-Americans and be held in black or Latino churches, Mormon meetinghouses and recreation centers in cities including Atlanta, Chicago and Camden, N.J.

“We are starting in five cities and we’re trying to serve our brothers and sisters who most need our service in those cities,” said Corbitt. “We’re coming together to do that and to identify them and get them enrolled in these courses or groups that will make a real difference in terms of their education and employment and really can change the course of their lives for many of them, is our hope.”

Corbitt, who previously was the African-American president of the stake, or regional area of Mormons, in Cherry Hill, N.J., said the church’s programs usually occur once a week for 12 weeks. But the duration and frequency of the collaborative programs may be different.

Brown, in an interview, said he believes the LDS church is focused on fostering better education and employment opportunities through the initiative rather than building its membership of 16 million people worldwide.

“They did not come with any hidden agenda of proselytizing,” said Brown, who also is the social justice chair of the National Baptist Convention, USA. “It was made clear up front that they were concerned about what the church today needed to do of substance to address the challenges of African-Americans and other marginalized people in inner-city communities.” 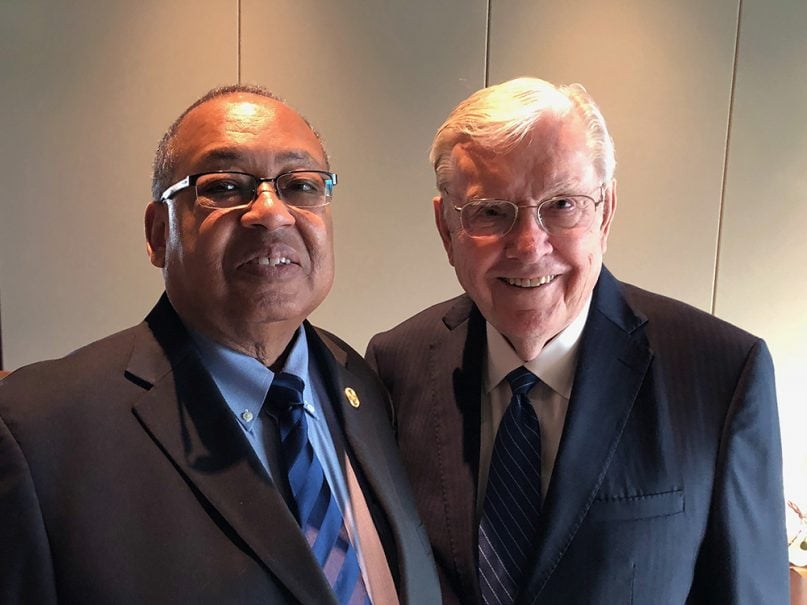 Leon W. Russell, left, chairman of the board of directors of the NAACP, with President M. Russell Ballard, of the Quorum of the Twelve Apostles, on Temple Square in Salt Lake City on Oct. 6, 2018. ©2018 Intellectual Reserve Inc.