KOLKATA, India (RNS) — Every year, Durga Puja is celebrated across India during the seventh month of the Hindu calendar, marking the victory of female power over the buffalo-demon Mahishasura. Durga Puja festivities, which took place this week, overlap with the nine-night Navaratri, also celebrating the divine feminine, in other traditions of Hinduism.

But while worship of the 10-armed goddess is primarily a religious occasion across most of the Indian subcontinent, in the state of West Bengal it is much more than that, a high point of the year that is seen as an expression and celebration of the once-dominant Bengali culture. 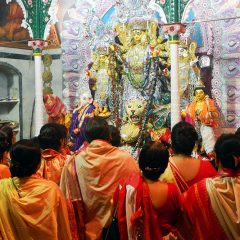 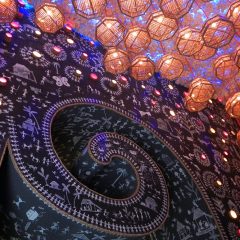 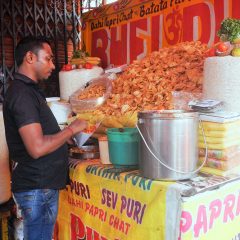 A street-food vendor prepares a savory snack made of puffed rice, vegetables and a tangy chutney outside a pandal in Kolkata, India, on Oct. 16, 2018. RNS photo by Priyadarshini Sen 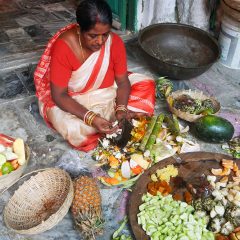 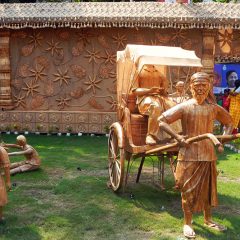 An outdoor art installation made of raw jute, a vegetable fiber, near a pandal in Kolkata, India on Oct. 16, 2018. RNS photo by Priyadarshini Sen

Kolkata, the cultural capital of Bengal, celebrates the five main days of the festival with fervor. The numinous energy draws people out of their homes in the middle of the night into streets thick with the aromas of night-blooming jasmine, fried foods and incense. They visit the highly decorative pandals — makeshift bamboo structures that celebrate the goddess in art — as well as attend cultural events and dance to drumbeats and loud chants.

Preparations for the carnival start months in advance, with artists and artisans vying to create the most innovative art works from scrap, recycled products and homespun ideas. Idols of the goddess astride a lion are placed at elaborately designed pandals, where the art inside covers serious issues — trafficking of women, child labor at tea shops or the plastic surgery obsession among young adults or scenes straight out of Bollywood movies. 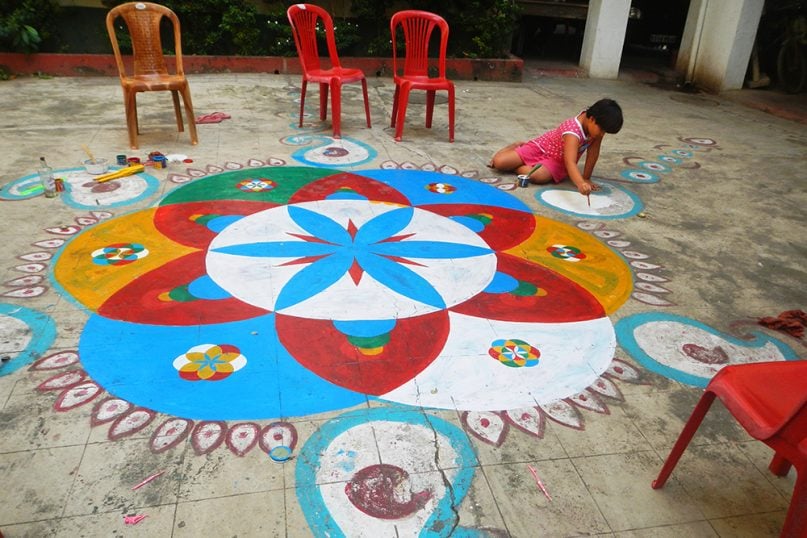 A girl paints a Rangoli art design in her courtyard during Durga Puja in the Bengal state of India. RNS photo by Priyadarshini Sen

Many homes, clubs, apartment blocks and temples construct their own puja scenes, so that every street corner holds a surprise for the unsuspecting visitor.

“Kolkata’s pandals must be showcased to the world,” Leandro Blanco, a Spanish filmmaker who documented the festival in in Kolkata, told the Times of India in 2016. “They aren’t just art, but a medium of expressing important messages.”

The elegance of Kolkata’s Durga Puja also lies in the depictions of the goddess in her many avatars rendered on ceremonial gates in sparkling lights, in outdoor installations and floor art, transforming the city into a massive open-air art gallery with a profusion of themes. 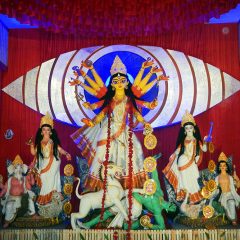 Goddess Durga in her modern avatar at a pandal in Kolkata, India, on Oct. 17, 2018. RNS photo by Priyadarshini Sen 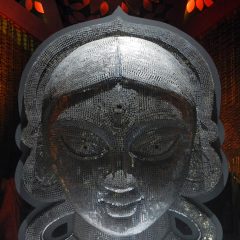 An art installation at a pandal in Kolkata, India, on Oct. 15, 2018. RNS photo by Priyadarshini Sen 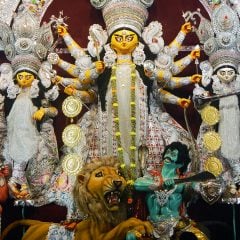 A traditional Goddess Durga idol decked out ahead of morning prayers in Kolkata, India, on Oct. 19, 2018. During the 10-day extravaganza, the city transforms into an open-air art gallery showcasing cultural and artistic expressions by skilled and unskilled artisans. RNS photo by Priyadarshini Sen

Hindu purists have been critical of the way theme pujas adapt Goddess Durga’s avatar to modern topics and artistic sensibilities. Subhasis Ghose, a member of a traditional family in Kolkata’s old quarter, says, “The over-commercialization of Durga Puja could rob the festival of its original flavor. We need to prioritize ritualistic ceremonies over glamour.”

The solemnity of Durga Puja comes at the festival’s end, with today’s Vijaya Dashami (Oct. 19), the 10th day of the victory of the goddess over the demon, when she’s led in huge processions to local rivers. Here, the idols are immersed — symbolic of Goddess Durga’s return to her husband Shiva in the Himalayas. 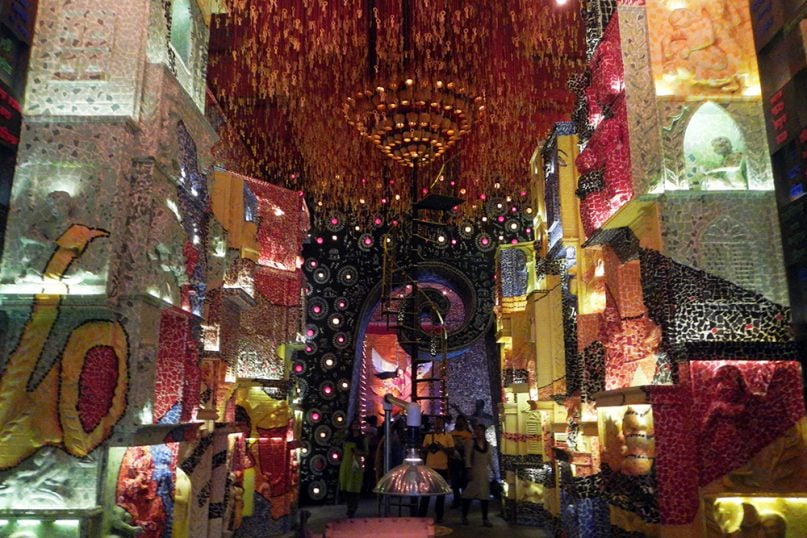 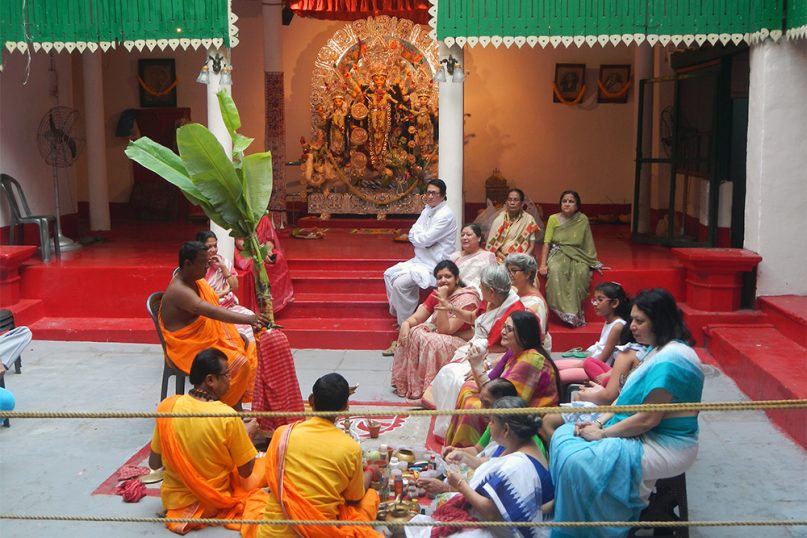 A ceremonial bath is given to a banana plant at the well-known Mallick historic home in Kolkata, India, on Oct. 17, 2018. RNS photo by Priyadarshini Sen 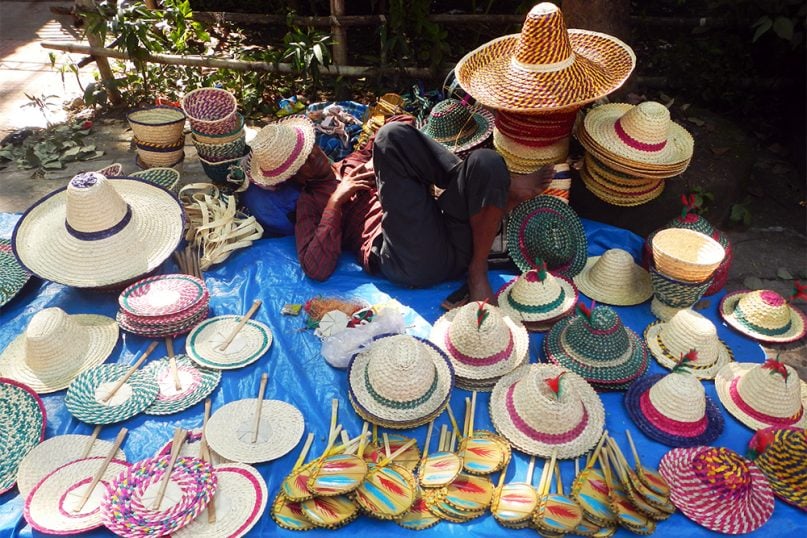 A seller of hats and hand-fans made from indigenous plants takes an afternoon break outside a pandal in Kolkata, India, on Oct. 15, 2018. RNS photo by Priyadarshini Sen 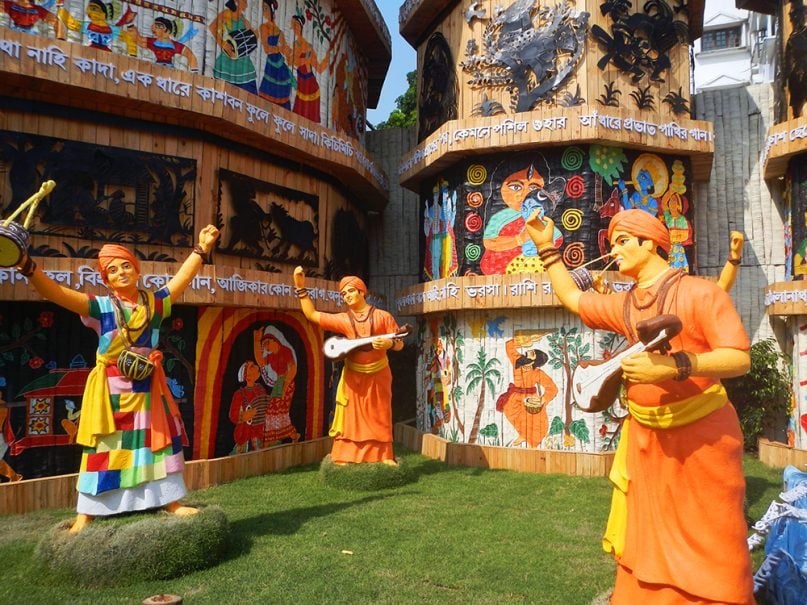 Artwork outside a pandal attempts to draw UNESCO’s attention to Kolkata being a “City of Literature,” on Oct. 19, 2018. RNS photo by Priyadarshini Sen 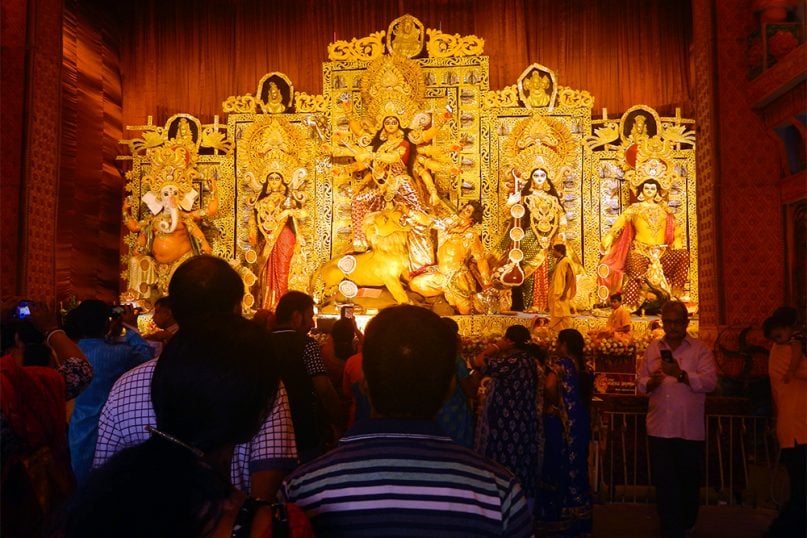 Visitors congregate at a pandal for evening prayers in Kolkata, India, on Oct. 15, 2018. RNS photo by Priyadarshini Sen