(RNS) — They pore over Nate Silver’s political data analyses with the rapt attention of day traders sizing up the stock market. Every day brings emotional peaks and valleys with each up and down in the polls and the president’s approval ratings. They tend to understand themselves and others primarily on the basis of political allegiances.

They are progressive activists, demonstrators and politics junkies — followers of what some chroniclers call the new “religion” and ultimate source of meaning for those who have left organized religion or never joined.

If they’re not careful, they’re on their way to becoming emotional and spiritual wrecks.

These mostly young political devotees deserve respect regardless of what one might think about their ideas and views. Talk to any of them and it’s obvious they care deeply about cultivating a fairer, better society. It’s good that they have more substantive interests and more developed moral sensibilities than what their older detractors associate with them.

But as important as they are, politics — political outcomes, in particular — are not a good place for human beings to invest our ultimate hopes and dreams. They inevitably let us down.

It’s not just progressive nonbelievers lured into unhealthy relationships with politics. A similar tendency seems to have taken hold even among the subset of churchgoing Americans who pride themselves on taking their religion more seriously than the rest of us: evangelical Christians. In discerning their positions on immigration, climate change and politicians’ character, evangelicals appear to turn to the Republican party playbook more than the Bible.

Given the way Donald Trump has been delivering for his evangelical base with Supreme Court appointees and the attention the president has paid to religious freedom, going all in with the GOP might appear a wise investment.

It’s not. Political partisanship has hamstrung evangelicalism’s ability to pursue what is supposed to be the core of its mission: to share the good news of the gospel. In the same way, some progressive Christians have made social justice politics their ultimate, instead of their pursuit of God. 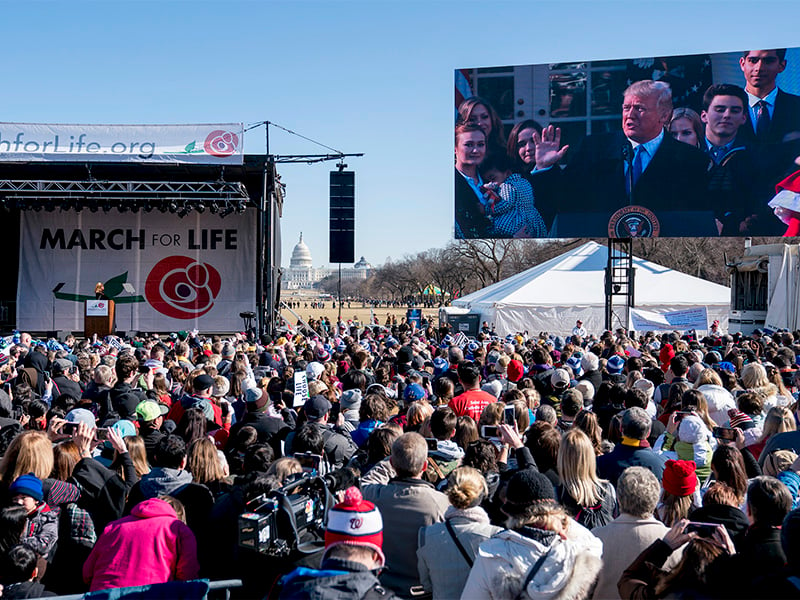 President Trump speaks via a live feed to anti-abortion activists as they rally on the National Mall in Washington, D.C., on Jan. 19, 2018, during the annual March for Life. The march protests the Supreme Court’s landmark 1973 decision that declared a constitutional right to abortion. (AP Photo/Andrew Harnik)

Whether you are religious or secular, conservative or liberal, caring about politics too much — caring the wrong way — can contaminate your soul and poison your emotional and spiritual core. It can leave you high and dry on an island of anger and disillusionment.

In a heated election season like this, the headlines and campaign messages toss you around on a wild roller-coaster ride. The subject lines take you from happy and excited to “heartbreak.”

They bring tidings of “bombshells” and “collapses” and “shocking” new twists in this or that race. You’ll be urged to get mad and seek revenge for the latest bad thing done by your political enemies.

One moment, you’re elated by a new poll showing your candidate surging. Your faith in humanity is restored by an inspiring video on Facebook. The next moment, this restored faith is crushed by headlines about sinister voter suppression tactics or the horrible thing that was just said or done by a dastardly hypocrite from the other party.

No one rides these chaotic tides for very long without burning out or breaking down.

Caring deeply about electoral politics can bring you highs, for sure. You’ll occasionally experience the sweet taste of victory and the satisfaction of seeing righteousness rewarded.

You will also suffer the sick feeling of defeat. You’ll see good deeds punished and bad deeds rewarded. You’ll know the pain of witnessing awful people winning and gloating about it.

You’ll be encouraged to turn a blind eye to the unethical tactics your side will employ to win.

You’ll be drawn into despising people on the other side and coming to regard them not as people but as cardboard cutouts representing all that’s loathsome in the world.

This is no way to live.

Make no mistake: Responsible, faithful citizenship requires political engagement. Never in recent history has voting been more important and — depending on your demographic group — more under threat. There is dignity and meaning in the struggle for a fair and just society. Please, get involved. Vote!

But don’t kid yourself that political outcomes will bring you meaning, purpose or salvation.

Invest your ultimate in faith, in enduring principles, in relationships with full human beings who are more to you, and you to them, than Democrats or Republicans. Invest in the value of the struggle itself — the struggle for a fairer and more humane world. It is the dream that is never fully realized but can never be snuffed out.

Invest in those things because they will still be there regardless of what happens on Nov. 6.

(Tom Krattenmaker writes on religion in public life and directs communications at Yale Divinity School. His latest book is “Confessions of a Secular Jesus Follower.”)