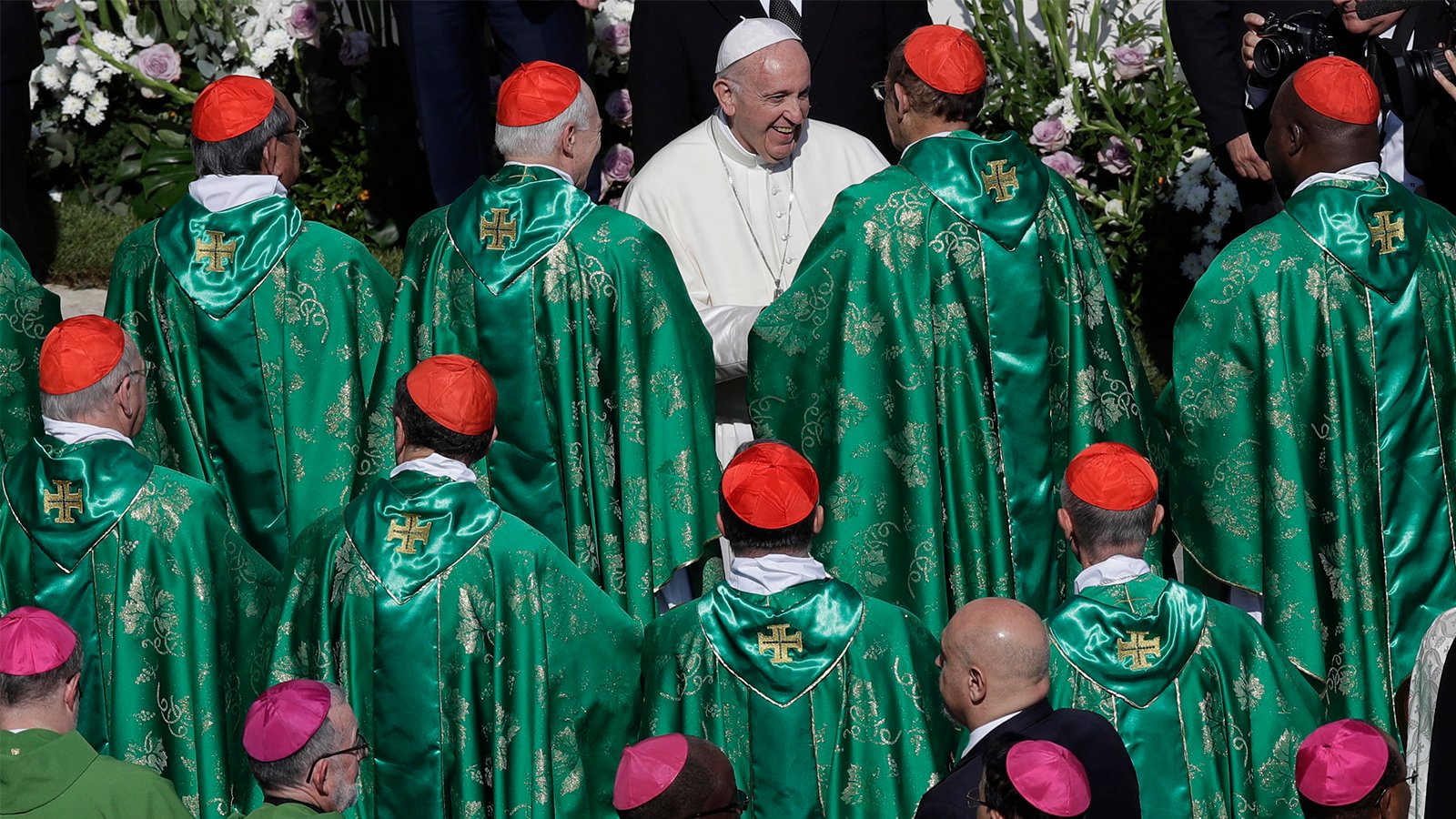 Pope Francis, top, greets cardinals at the end of the opening Mass for the Synod of Bishops on Young People, in St. Peter's Square at the Vatican, on Oct. 3, 2018. (AP Photo/Alessandra Tarantino)
October 21, 2018
Nicole Winfield

VATICAN CITY (AP) — Catholic bishops are entering their final week of debate over hot-button issues facing young Catholics, including how the church should welcome gays and respond to the clerical sex abuse scandal that has discredited many in the church hierarchy.

The monthlong synod of bishops ends next weekend with the adoption by the 260-plus cardinals, bishops and priests of a final document and approval of a separate, shorter letter to the world's Catholic youth.

Some of the youth delegates to the meeting have insisted that the final document express an inclusive message to make LGBT Catholics feel welcome in a church that has often shunned them.

The Vatican took a step in that direction by making a reference to "LGBT" for the first time in its preparatory document heading into the meeting.

But some bishops have balked at the notion, including Philadelphia Archbishop Charles Chaput, who insisted in his speech that "there is no such thing as an 'LGBTQ Catholic' or a 'transgender Catholic' or a 'heterosexual Catholic,' as if our sexual appetites defined who we are."

But other bishops have expressed a willingness to use the language, though it remains to be seen if the final document or the letter will. Each paragraph will be voted on one by one and must obtain a two-thirds majority.

"The youth are talking about it freely and in the language they use, and they are encouraging us 'Call us, address us this because this is who we are,'" Papua New Guinea Cardinal John Ribat told a news conference Saturday (Oct. 20).

One of those young people, Yadira Vieyra, who works with migrant families in Chicago, said gays often feel attacked and shunned by the church.

"We know that's not true. Any Catholic knows that's not true," she said. But she added bishops need to communicate that "the church is here for them."

Catholic church teaching holds that gays should be loved and respected but that homosexual acts are "intrinsically disordered."

The Oct. 3-28 synod has unfolded against the backdrop of the clergy sex abuse scandal exploding anew in the U.S., Germany, Poland and other nations. Some conservatives have charged that a gay subculture in the priesthood is to blame, even though studies have shown that gays are not more likely than heterosexuals to abuse.

Many of the young delegates have insisted that the final document address the abuse scandal straight on, and Melbourne Archbishop Peter Comensoli hinted that it would.

"One of the key things that will be important going forward is not just that there might be a word of apology, of recognition and of aiming for better practices, but that there is action associated with that," he said.

Chicago Cardinal Blase Cupich said young people are also demanding accountability and transparency from the church's leadership, which has been excoriated for having covered up the abuses of predator priests for decades.

He repeated his call, first made in an interview last week with National Catholic Reporter, for bishops to cede their own authority and allow an external process involving lay experts to investigate them when an accusation against them has been made.

September 21, 2020
Related Posts
By D.L. Mayfield
How a Sean Feucht worship service convinced me I am no longer an evangelical
By Jack Jenkins
Head of Federal Election Commission calls separation of church and state a ‘fallacy’ and 2020 election a ‘spiritual war’
By Yonat Shimron
Mark Galli, former Christianity Today editor and Trump critic, to be confirmed a Catholic
By Alejandra Molina
After pushback, US Navy agrees to retain contracts with civilian Catholic priests at California naval bases
By Claire Giangravé
Pope Francis encourages nun helping trans community in Argentina