WASHINGTON (RNS) — Going through his late father’s attic painting studio in 2013, a German banker named Martin Wiedmann was surprised to find a Bible that his father, Willy, had spent years creating. The 3,333 illustrated pages were bound as a leporello, a book that is pleated like an accordion. Fully laid out, Willy Wiedmann’s Bible stretches about a mile in length, or about 50 times the length of an unrolled Torah scroll.

Wiedmann had made the book at his combined home and art gallery in Stuttgart over 16 years, beginning in 1984, working in almost complete obscurity. “He lived away from the family. I hardly ever saw him,” said the younger Wiedmann, who lives in Zurich, of his reclusive father.

Martin Wiedmann has since devoted himself to promoting his father’s work.

On May 7, 2017, 500 volunteers held up a copy of the leporello, also called a concertina book, along the Elbe River in Magdeburg, Germany, to set a Guinness World Record for the largest such book, according to the Museum of the Bible in Washington. The museum will open a Wiedmann exhibit on Saturday (Oct. 27).

In addition to his Bible, the museum exhibit includes Wiedmann’s handwritten notes, two abstract series devoted to the cross and to the Twelve Apostles, and a re-creation of Wiedmann’s attic studio. A multimedia presentation of Wiedmann’s Bible art scrolls on three screens set to jazz music.

The music is apropos, as Wiedmann trained as both an artist and a musician and played music professionally. Amy Van Dyke, lead curator of exhibitions at the museum, said there is a geometry and a rhythm to his work, which he called “polycon,” combining the Greek words poly (many) and ikon (picture or panel). 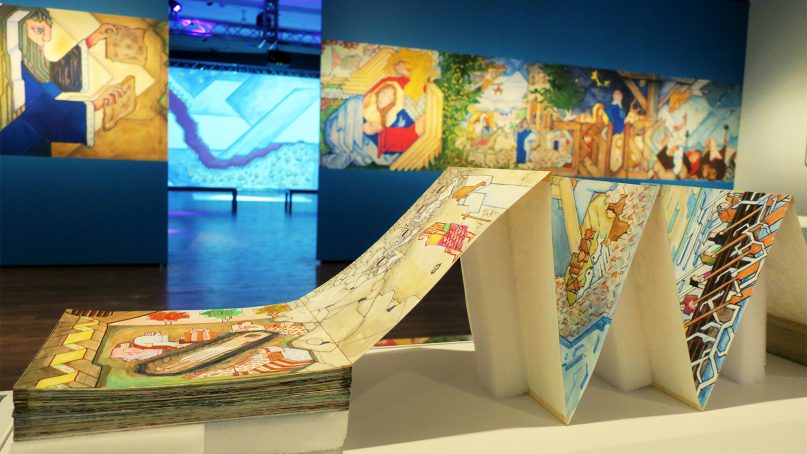 Part of Willy Wiedmann’s 3,333-illustration series spanning the entire Bible is on display at the Museum of the Bible in Washington. The German artist called his style “polycon,” a combination of the Greek poly for “many” and ikon for “picture or panel.” RNS photo by Menachem Wecker

Viewers will notice references to everything from surrealism to abstract expressionism, which Van Dyke credits to Wiedmann’s experience operating his art gallery.

“This is a wish come true,” said Martin Wiedmann on a walk-through of the exhibit. “One of my jobs is to tell the Wiedmann Bible story to the public. … I make the story known.”

Wiedmann has spent $30,000 digitizing all of his father’s illustrations and commissioned an app, which displays the works and which he offers to educators for free.

He said his father’s goal was to spread awareness of the Bible, particularly to those intimidated by its complicated language, as the artist said he himself was. In a quote that appears in the exhibition, the artist says, “The ones who are afraid of reading the Bible, because they often do not understand the written text, can benefit from it.”

For Martin Wiedmann, his championing of his father’s work has caused him to think and talk about the Bible almost daily, a level of engagement he recommends to others. He thinks his father’s illustrations can help those who aren’t regular Bible readers.

“I strongly suggest to take a much deeper dive into the biblical stories,” he said. “With the Wiedmann Bible, you can experience the Bible in a whole new way as paintings.”

Through the exhibition, the viewer also gets to know the versatile, obsessive and often mischievous character of the artist. He would frequently work and exhibit under aliases so he could experiment more in his art.

One fake bio, for Yugone, expressed the artist’s interest in mathematics and chemistry and credited him with inventing the “Slang Machine” and founding the “Pre Human theory.” Wiedmann boldly claimed in an exhibit invitation that Neil Armstrong had carried a postcard of Yugone’s work in his pocket when he walked on the moon.

Despite his fondness for invention, Wiedmann could hardly have imagined that his son would etch his name on the world record ledger or  introduce his mile-long Bible to audiences across the globe.

News
How the Museum of the Bible produces a white evangelical Bible
Follow us on Facebook!
Submit your photos to RNS