VATICAN CITY (RNS) — For those looking for Pope Francis’ synod of bishops on young people to settle the current divides in the Catholic Church between bishops and laity, conservatives and reformers, LGBT Catholics and those who regard that group as an oxymoron, the synod’s final report is bound to disappoint.

It should come as no surprise that the report approved on Saturday (Oct. 27) by the bishops who met here over the past month is filled with generalities. The broad topic of the synod, “young people,” did not lend itself to specifics. In addition, each of the 167 paragraphs needed to be approved separately by a two-thirds vote — 166 out of the 249 bishops present. This encouraged compromise to get the needed votes.

In addition, the document deals with a host of issues: treatment of women in society and in the church, the church’s attitude toward LGBT members, clerical sex abuse, warfare, poverty, migration, human trafficking and corruption. With such a large number of topics, generalities are necessary.

But the splits in the church were nonetheless visible, as the report’s most controversial topic, the church’s ministry to homosexuals, illustrates.

After much formal and informal debate at the synod, the final report dropped the acronym LGBT, which had appeared in the first draft. Even so, the paragraph received the lowest number of yes votes, 178, only 12 more than the required two-thirds. Most other paragraphs received overwhelming votes. 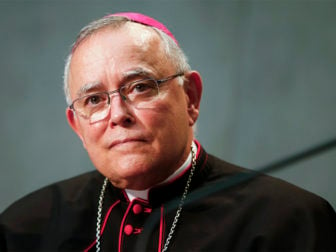 Archbishop of Philadelphia Charles Chaput at the Vatican on Sept. 16, 2014. Photo by Tony Gentile/Reuters

Opposition to the use of “LGBT” came from conservatives, like Archbishop Charles Chaput of Philadelphia, who felt using the term implied an endorsement of gay lifestyle.

African bishops also opposed the term, saying that these issues were not a priority in their countries, although some acknowledged that after they dealt with issues like civil wars, refugees, and poverty, the LGBT issues may come to the fore.

But even the watered-down statement had some positive things to say. It states that “God loves every person and so does the Church” and reaffirms the church’s opposition to “any sexual discrimination and violence.” The first draft was more specific with a condemnation of violence based on “sexual orientation.”

The synod’s document also spoke of “paths of accompaniment in the faith of homosexual persons” where “people are helped to read their own history; to follow with freedom and responsibility their baptismal call; to recognize the desire to belong to and contribute to the life of the community; to discern the best means of realizing this.”

Francis DeBernardo, executive director of New Ways Ministry, which advocates for LGBT Catholics, applauded the call for “a deeper anthropological, theological and pastoral elaboration of sexuality and affectivity.” He interpreted this as the bishops’ admission “that the church still has a lot to learn about sexuality.”

DeBarnardo saw an acknowledgment of Pope Francis’ leadership in the report, which, DeBernardo wrote, “reinforces the prohibition of same-sex relationships, though it does so in a way that has been typical of Pope Francis: it does not use condemnatory language, but instead it endorses the heterosexual model as ideal.”

The report also has very strong language on women in the church, citing the need to increase their decision-making “at all levels” and speaking of “the urgency of an inescapable change.”

The bishops acknowledged that the church’s teaching on the inherent differences between men and women can lead to “forms of domination, exclusion and discrimination from which society and the church alike must free themselves.”

Interestingly, the bishops avoided using the word “complementarity,” a John Paul II term that feminists see as demeaning, instead referring only to “reciprocity between man and woman.”

But the document did not open the way for women’s ordination to the priesthood or the diaconate. Nor did it call for allowing women to vote in the synod, which had been a controversy outside the synod. The absence of this kind of specificity is disappointing but not surprising. 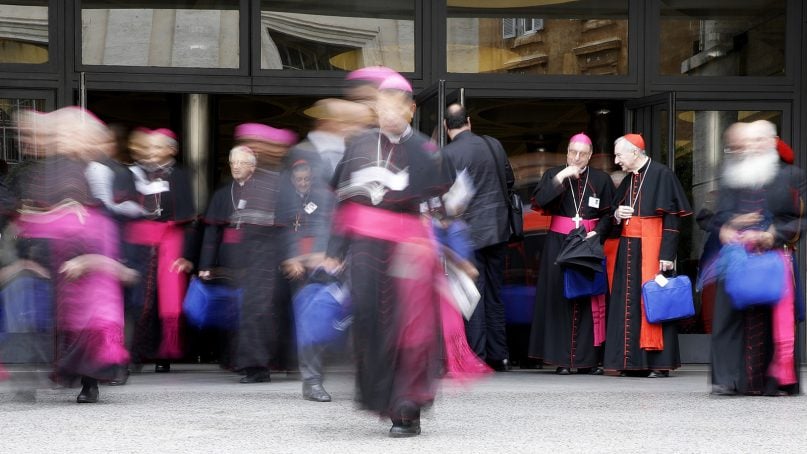 Cardinals and bishops leave the Synod Hall at the end of a morning session of the synod of bishops at the Vatican on Oct. 11, 2018. The meeting of bishops on young people ran from Oct. 3-28. (AP Photo/Alessandra Tarantino)

The document also included a heading about apologizing for abuse, but while the bishops did express gratitude to victims who came forward, the following paragraphs included no apology. The earlier draft’s five paragraphs were cut to three and language endorsing “zero tolerance” of abuse was dropped, instead calling for “the adoption of rigorous measures of prevention.”

This was clearly a missed opportunity, and the synod’s fumbling on this issue shows the importance of the February 2019 meeting of presidents of episcopal conferences that the pope has called to discuss sexual abuse.

Bishops from Africa and the developing world objected that the synod’s working paper and the first draft of the final report were overly focused on First World issues and not the concerns of their young people. The final report was strengthened in its dealing with warfare, poverty, refugees, migration, human trafficking and corruption. Cardinal Blase Cupich of Chicago played a role in advocating for these topics.

“The church’s concern is directed particularly at those who are fleeing war, violence, political or religious persecution, natural disasters due to climate change, and extreme poverty,” said the report.

Those who had been to earlier synods said that this synod was the least controversial — some called it “joyful” and “hopeful,” thanks to the presence of young people in the synod hall. It should be noted that these young people were all “good Catholics,” involved in the church; some are even employed in Catholic youth ministries. The large numbers of youth who have abandoned the church were present only in the recollections of these youthful auditors of friends and family members who had left.

Synods under John Paul II and Benedict XVI were much more controlled, with curial cardinals telling members of the synod what could and could not be discussed.

But experienced synod-goers praised this one for its organizers’ extensive preparations, including the pope’s meeting last March with young people. Although some anti-Francis commentators tried to portray the synod as “rigged,” one did not hear that from attendees. Rather, they spoke of the open dialogue and conversations that took place, especially in the small groups organized by language.

There were some holes: The final document is available only in Italian, a real handicap for those voting members not conversant in the language. This is no way to run an international organization. 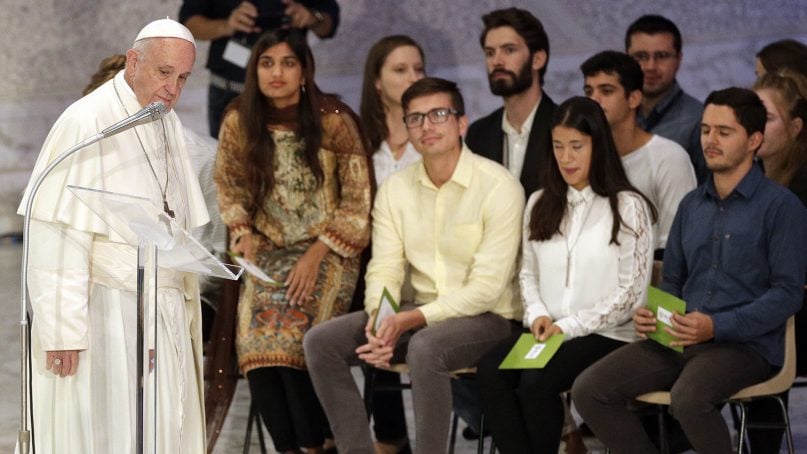 Pope Francis approaches the microphone to deliver his message in the Paul VI Hall as he meets with youth attending the Synod at the Vatican on Oct. 6, 2018. (AP Photo/Gregorio Borgia)

Perhaps the greatest fruit of the synod is with the bishops who embraced the synodal process. The process involved looking at the real lives of young people, listening to them, reflecting on their situation in light of the Gospel, and only then devising programs to respond to their needs.

This is quite different from the church’s traditional approach of trying to cram its teaching and programs down the throats of the young. If bishops internalize this process and use it in their countries and dioceses, this would be the greatest fruit of the synod.

Pope Francis wants the Catholic Church to become a synodal church, a discerning church where the church listens and responds to reality rather than simply imposing old solutions that don’t work. Francis realizes that the church must become a listening and accompanying church, if it is to help people.

Sadly, not all the bishops got it. Fifty-one bishops, 20 percent of those voting, voted against the paragraph encouraging synodality in the church.

Some bishops insisted on adding a reference to Jesus and the disciples on the way to Emmaus as a biblical example of the synodal process.

This is truly a magnificent story, but if the bishops think they are Jesus and young people are the disciples, they missed the whole point Francis was trying to make. We are all disciples, and the disciples’ confusion before Jesus joins them is reflective of the entire church. Or to put it another way, sometimes Jesus may be the young explaining things to the bishops.