VATICAN CITY (RNS) — As the Catholic church’s monthlong synod on young people reaches its halfway point here, there has been more excitement outside the synodal hall than inside.

While Catholic bishops from around the world huddle at the Vatican to talk about young people, North Korean dictator Kim Jong Un invited the pope for a visit, spurring a debate about how the pope should respond: Can the pope visit a dictator who has no respect for religious freedom? Will he, like President Trump, take the risk of a spur-of-the-moment visit, or will he delay the visit until his diplomats carefully prepare for the meeting?

Also overshadowing the synod was Cardinal Marc Ouellet’s strong defense of the pope against attacks by Archbishop Carlo Viganò, the former papal representative to the United States. Ouellet’s letter to Viganò is the fullest Vatican response so far to the archbishop’s claim that Francis waived sanctions imposed by Pope Benedict on ex-Cardinal Theodore McCarrick.

Ouellet, however, acknowledged there are unanswered questions about how McCarrick was promoted in the hierarchy under John Paul II.

Finally, on Oct. 12, the pope reluctantly accepted the resignation of Cardinal Donald Wuerl as archbishop of Washington, D.C. 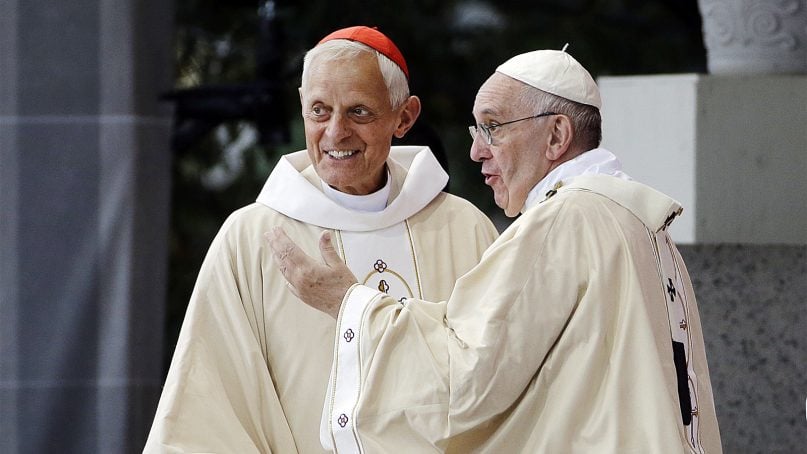 Wuerl had been under criticism for his management of clergy sexual abuse while he was bishop of Pittsburgh in the 1980s and 1990s. In a letter to Wuerl, the pope acknowledged the bishop may have made mistakes but denied he was involved in a cover-up. Francis also denounced the “sterile divisions sown by the father of lies who, trying to hurt the shepherd, wants nothing more than that the sheep be dispersed.”

It is hard for a synod to compete with stories like these — especially a synod not dealing with controversial issues, like Communion for divorced and remarried Catholics, as at the last synod.

The controversial issue that the media does want to talk about — the sex abuse scandal — is not officially the subject of the synod. The bishops acknowledge that their own poor handling of the crisis has severely undermined the church’s credibility to speak to the young, but the topic will be more fully treated in Rome at the February meeting of the presidents of bishops’ conferences.

Meanwhile, the positive and negative aspects of the synodal process have become evident.

For one thing, all of the voting members of the synod are men, with women present only as nonvoting experts and auditors. Outside the Vatican, Italian police broke up a demonstration where women were chanting: “Knock, knock. Who’s there? More than half the church.”

The problem is that while the synod includes mostly bishops, there are also a few priests and two religious brothers. While the bishops and priests are “ordained clerics” under church law, brothers are laypersons. The only theological or canonical difference between a religious brother and a religious sister is gender. Excluding women is, therefore, indefensible.

If you can’t have women, it only makes sense to get rid of the priests and brothers. In fact, get rid of the cardinals and bishops from the Roman curia, so that only diocesan bishops are voting members of the synod.

Despite these problems, the synod does perform a valuable function. Having bishops from all over the world come to Rome provides input from outside of the Vatican. All the bishops testify to the positive experience of hearing from bishops of different countries and cultures talk about the situation of the church. 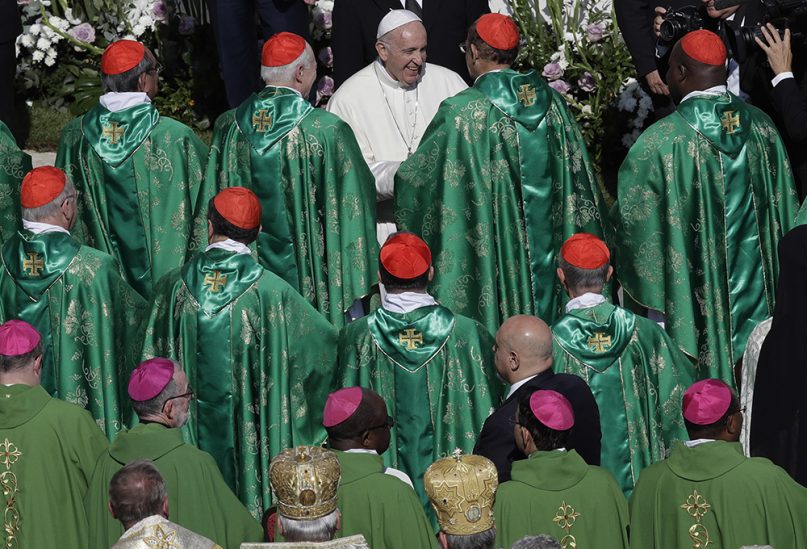 Pope Francis, top, greets cardinals at the end of the opening Mass for the Synod of Bishops on Young People, in St. Peter’s Square, at the Vatican, Wednesday, Oct. 3, 2018. The synod brings together 266 bishops from five continents for talks on helping young people feel called to the church at a time when church marriages and religious vocations are plummeting in much of the West. (AP Photo/Alessandra Tarantino)

The situation of young people is very different around the world. The condition of young refugees, for example, is quite different from that of young, middle-class white Americans.

The variety of cultural, political, economic and religious conditions of young people around the world makes it impossible for the synodal fathers to come up with concrete programs for the young. These must be created and implemented at the local level. As a result, the synod’s final report or recommendations will probably be general in tone.

For example, there was an extensive consultation process prior to the synod. Last March, the pope met with young people to get their input. There were also online surveys that accepted input from thousands of young people.

The working document (Instrumentum Laboris) prepared prior to the synod reflected this input. It also laid out a methodology of discernment for approaching issues in the church. Discernment is a favorite word for Francis, coming from his Jesuit background.

The document states that discernment is “a way of life, a style, a fundamental attitude and also a working method; it is a path to walk together, whereby we look at the social and cultural dynamics we are steeped in, through the eyes of the disciple.”

Francis would like the church to become a discerning church.

Discernment requires looking at reality, listening to other people, and prayerfully reflecting on Christian values before making a decision. Discernment is exactly the opposite of making decisions from an ideological perspective, whether from the left or the right.

Thus, the greatest fruit of the synod may be methodology. It was noteworthy that many members of the synod used the language of discernment in their presentations. They appear to have internalized it. If this style spreads, the synod will have been a success even though it does not deal with all the challenges facing the church with young people.

But other synodal fathers were skeptical of language like “listening.” They preferred to stress the importance of clear teaching. “Listening” implies that bishops can learn something from young people. This is difficult for people who think they have all the answers.

Listening and teaching are, of course, not contradictory, but lectures are not going to connect with the young who want to be listened to and engaged in discovering a way forward for the church. Forcing old answers on this generation is not working.

Whether Francis can turn the church into a discerning body remains to be seen. This is not something that can be commanded; it must be freely embraced. But whether he is successful or not will determine the church’s future, especially with young people.